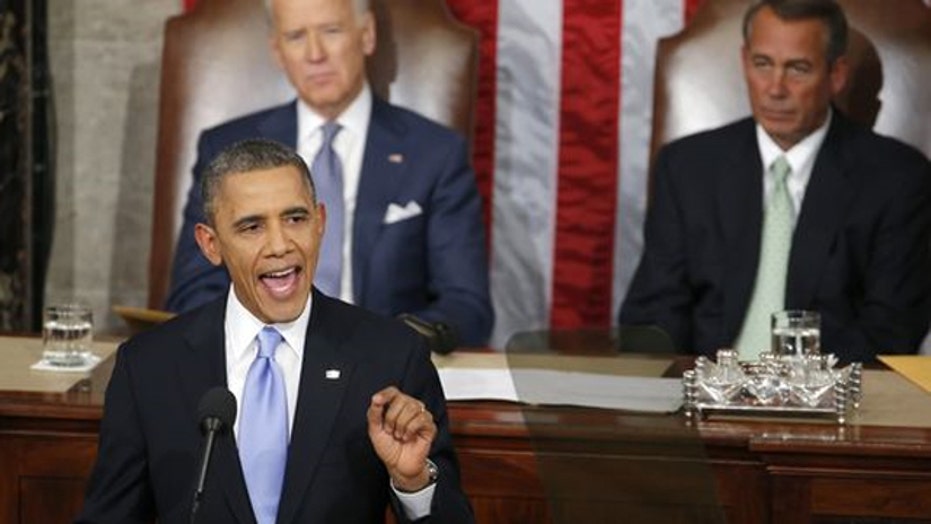 State of the Union address reignites debate over taxes

The tax plan President Obama unveiled during his State of the Union is an assault on economic growth cloaked in populist demagoguery. It will not help middle class Americans but rather guarantee that their incomes remain stagnant. He wants to divert attention from the fact that his policies of higher taxes, blow-out spending, anti-growth regulations and the costly, chaotic government-created disruption of ObamaCare have caused median incomes to stay below what they were back in 2007.

The GOP should brush aside Obama's capital-destroying, investment-dampening nostrums and instead take a page from his playbook and go on offense. How? Propose the flat tax.

Most Americans are deeply worried that their expenses are rising faster than their incomes.While the economy is showing more signs of life lately, it is far behind what it should be at this stage of an expansion. And this uptick is jeopardized by troubled economies around the world. Rather than us lifting them up--we are not strong enough to do that--they are more likely to drag us down. Germany is stagnant and the rest of Europe is in recession. So is Japan, the world's third largest economy. Mexico and Brazil are as well. China is slowing, as is neighboring Canada, our largest trading partner. Russia is a basket case.

The GOP should brush aside Obama's capital-destroying, investment-dampening nostrums and instead take a page from his playbook and go on offense. How? Propose the flat tax.

Hardly any of these nations are making the structural changes needed to spark a healthy, durable expansion--major cuts in tax rates; deregulation, especially in job-killing labor regulations; reining in government spending; and critically important, stable currencies.

Instead too many nations are counting on monetary policy, especially cheapening their currencies, to reignite growth. Obama’s appointees to the Federal Reserve have pursued trickle-down economics--try to boost bond and stock prices which will create a "wealth effect" that will, in turn, stimulate investment and spending--that have warped credit markets. The result has limited access to loans for small and new businesses, the very entities that are the big job creators. The European Central Bank, having learned nothing from the failures of the Federal Reserve, is about to embark on a half-baked version of the quantitative easing that the Fed did and what the Bank of Japan is futilely doing now.

And how does President Obama respond to this deepening global crisis and a none-too-lively economy at home, particularly after he and his party's midterm elections shellacking? By going for the kinds of policies that are suffocating economies elsewhere: massive, anti-growth tax increases and redistributionist tax credits to score cheap political points. Take from rich and give to the middle class and poor!

Polls show that concepts like capital creation and business investment score poorly, that bankers and Wall Street are still held in ill repute. And so the president and his party figure they can revive their fortunes by flogging faux populist programs to show that they are the true champions of the beleaguered people and nemesis of those nefarious rich 1 percent. Propose tax increases on the rich and Republicans will have to comply or suffer the public relations consequences!

Ultimately, however, Obama’s proposals would do far more harm than good.

Raising the capital gains tax? Revenue projections from such raises always fall below expectations. Worse, it damages the economy. Investing is crucial to growth. It is risky. Raising the price of risk-taking is self-defeating.

Obama here cares not for growth or revenue impacts but for punishing successful people. He appears to love the lavish life style but he viscerally dislikes successful people who have created wealth. The comparison of his proposed levy to Reagan's is ludicrous: the top personal income tax rate under Reagan was cut to 28 percent. Under Obama, the effective top rate is about 43 percent.

Closing the death tax "loophole"? Another piece of nonsense. Under current law, if you inherit an asset that is valued at $10,000 but originally cost $5,000, you do not pay capital gains taxes on the $5,000 gain if you sell the asset. The reason is simple: the asset has already been subject to estate taxes. What Obama wants to do is raise the effective top death tax rate from 40 percent to over 60 percent.

These and other Obama proposals are all destroyers of capital creation and investing, that is, they are anti-growth and would turn the U.S. into a stagnant economy like that of France, where the average growth rate since 1978 has been under 1 percent. The GOP should brush aside Obama's capital-destroying, investment-dampening nostrums and instead take a page from his playbook and go on offense. How? Propose the flat tax.

Obama claims he wants to help the middle class. The updated version of the flat tax I proposed when I ran for president would enable a family of four to earn $52,000 in wages free of federal income tax. Ponder that number of $52,000. Liberals will have a hard time trashing that! Moreover, that family would pay only 17 percent on each dollar earned above $52,000.

Not only does the flat tax give immediate relief to wage earners, it also encourages capital creation and investing, which are critical to getting a dynamic economy again, the kind of economy that leads to better jobs and higher pay.

GOPers must not fall into the trap of letting Obama define the terms of debate. Force Democrats to respond to the idea of a new code of simplicity and fairness that jump-starts the economy. Obama's risky schemes would be a tax lawyer's and lobbyist's delight. More complexity is not needed. Americans get that.