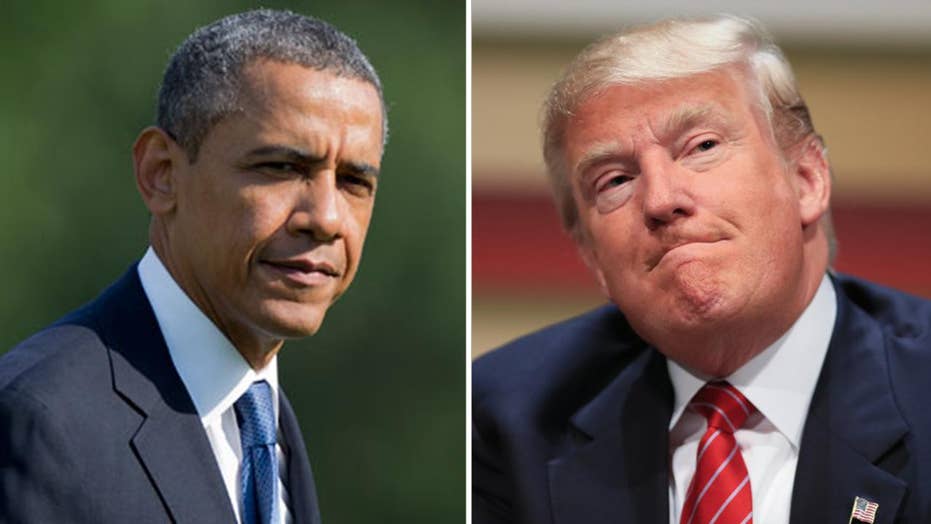 Who deserves credit for the economy: Obama or Trump?

The 'Cavuto on Business' panel weighs in.

Speaking at a conference of mayors in Chicago recently, Mr. Obama said, “We saw the longest streak of job creation in American history by far — a streak that still continues, by the way.” After a dramatic pause, he added: “Thanks, Obama.”

Obama has always been excellent at making speeches. But delivering robust growth? Not so much. Certainly not the kind of 3 percent-plus growth the U.S. is enjoying today, which has forced unemployment to a 17-year low. Instead, we saw an extended period of tepid gains that did little to boost the spirits (or wages) of discouraged Americans.

President Obama will never understand what happened on Election Day, and why the country’s mood brightened.

But it’s important that our policymakers understand. Trump’s victory resulted in a sea change in expectations, setting off a benevolent chain reaction which continues to this day. That fact alone makes this undeniably Trump’s economy.

Here’s how we know:

Against all expectations, the stock market started to boom on November 9, 2016, the day after the election. The Dow soared 257 points, and gained 9 percent by year-end, for the biggest post-election rally ever. Why? Because investors believed that newly-elected President Trump was determined to create jobs, bring businesses back to the U.S., lower taxes and loosen the regulatory noose created by Obama. That’s what he campaigned on, and that’s why he was elected.

What Obama never understood is that there is a close and important correlation between optimism and growth. Optimistic consumers spend money. Optimistic investors buy stocks. Most important, business leaders who view the future positively will invest in growth.

The optimism unleashed on November 8, 2016, was astonishing. The very next month, consumer confidence soared to a 15-year high, according to the Conference Board, “well ahead of analysts' expectations.” To be precise, the index rose to 107.1 from 98.6; economic gurus were forecasting 101.5.  It wasn’t the “current conditions” survey that popped, but rather the “future” outlook that jumped to the highest level since 2003.

The University of Michigan also saw their consumer confidence index leap. “The initial reaction of consumers to Trump's victory was to express greater optimism about their personal finances as well as improved prospects for the national economy," Richard Curtin, the survey's chief economist, said at the time.

Gallup, too, in its polls, noted a jump in optimism post-election. They reported that the survey bumped into positive territory (most people think conditions are good) for the first time since early 2015.

Consumers were not alone. Small business owners were also cheered by Trump’s election. The National Federation of Independent Business reported an immediate surge in optimism among its members, with its confidence index rising to 105.8, its highest level since the end of 2004. The December gain was 7.4 points, the biggest monthly leap since 1980.  The outlook from corporate CEOs, too, turned more positive. In fact, nearly every measure of manufacturing and business sentiment improved in the weeks following the election.

What Obama never understood is that there is a close and important correlation between optimism and growth. Optimistic consumers spend money. Optimistic investors buy stocks. Most important, business leaders who view the future positively will invest in growth.

Michelle Meyer, chief U.S. economist at Bank of America Merrill Lynch, wrote in the weeks following the election that a pickup in business confidence normally boosts capital expenditures within a fairly short time frame, while rising consumer confidence can predict higher spending. That is, of course, exactly what happened.

Last year’s holiday spending was the highest in five years, up 4.8 percent after gains of 3.8 percent and 3.1 percent in the two prior years.

In early January, the NFIB’s chief economist Bill Dunkelberg wrote, “…we are also finding evidence that higher optimism is leading to increased business activity, such as capital investment.”

This is a simple concept, but only if you believe Mitt Romney’s assertion that “Corporations are people.”

Liberals trashed Romney for that remark, but he was right, of course. What he meant was that people are in charge of businesses, and responsible for the decisions they make. Cheery CEOs can do wonders for the country by hiring people and investing in new plants and equipment.

Democrats consider corporate America the enemy. Chuck Schumer derides the GOP tax plan as a handout to Big Business, as though the interests of that group are antithetical to those of working class Americans. Obama, sharing that sentiment, never reached out to the business community, never tried to understand and alleviate their concerns.

Trump is doing that.

Make no mistake: Trump needs to deliver on his campaign promises. It looks like the tax bill will pass, and that’s an important achievement. But we also need the infrastructure program he promised, as well as beefed-up job training, better public education, more favorable trade treaties, and we need to take a whack at out-of-control entitlements like Medicaid. And we need job gains to boost wages, which they inevitably will.

Obama left a long to-do list. He also left an economy that had disappointed millions of middle class Americans, who rewarded him by electing President Trump.