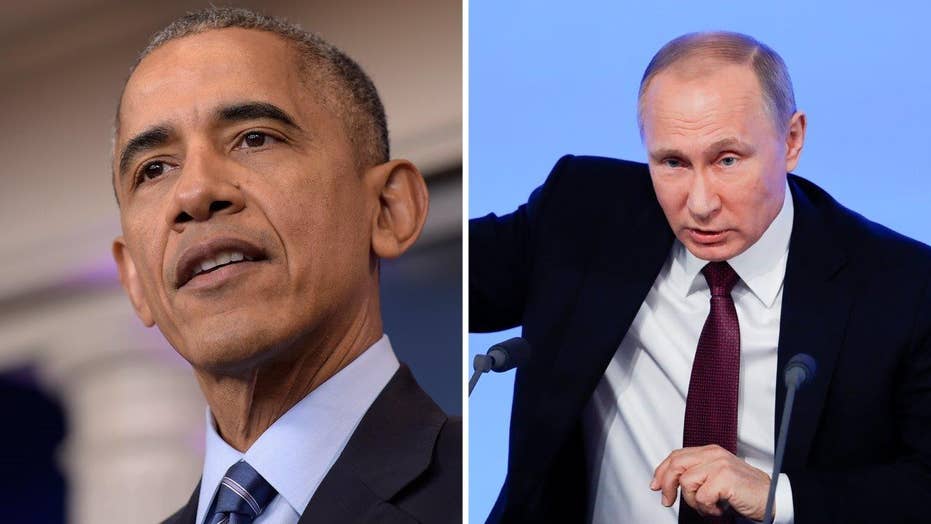 US announces new slew of sanctions in response to hacking; 'The O'Reilly Factor' investigates the latest

On Thursday afternoon, President Obama announced new sanctions against Russia for its role in hacking the Democratic National Committee and allegedly interfering in the November presidential election.

Under the sanctions, Obama has kicked 35 Russian intelligence operatives out of the US and forced the closure of two Russian diplomatic compounds in Maryland and New York. These are very real consequences.

The new sanctions also include travel bans and asset freezes targeting four top officials in the G.R.U., Russia’s military intelligence agency. The administration also plans to release a series of reports documenting the evidence linking Russian intelligence to the hacks.

While the G.R.U. officials will likely be unaffected by the largely symbolic sanctions, releasing information about the hacks will help the US and other nations preempt and deter future cyberattacks by Russian government operatives.

The new sanctions against Russia are welcome change from an administration that has consistently failed to stand up to Putin, and whose record is marred by Russian successes in Ukraine, Syria, and beyond.

Clearly, the Russian’s dangerous interference in the elections and direct targeting of American democracy demanded a serious response and, at least this time, the Obama administration has taken a meaningful first step in striking back at Putin/

Indeed, President Obama stated that, “All Americans should be alarmed by Russia's actions.”

However, all Americans should be equally alarmed by how late Obama’s retaliatory efforts come, with a mere three weeks left in his two-term Presidency.

If nothing else, the Obama presidency represents eight years of weakness in global leadership and bad deals with our greatest geopolitical foe, Russia.

For nearly a decade, the Obama administration’s efforts have emboldened our Russian adversaries to violate their neighbors’ territorial sovereignty, as well as perpetrate one of the worst terrorist attacks since 9/11 in the missile attack on Malaysian Airlines Flight 17.

From day, the Obama administration’s 2009 Russian reset was as much a naïve failure that allowed Putin to rebuild his conventional and nuclear military capabilities, which he is putting to deadly use today in Ukraine and Syria.

In the intervening years, Russia also repeatedly violated the already-weak 2010 New START nuclear agreement at every possible turn, while President Obama failed to follow through on the completion of the ever-necessary NATO missile shield, which would protect both Europe and America from Russian or Iranian attacks.

While the new sanctions are a step in the right direction, they will not be enough to stop Putin’s master plan to destroy free and democratic nations throughout the world and restore Russian power and global influence. That will take real leadership from the next President, not a last-minute scramble from lame-duck Obama.

Russia’s grand strategy, which I outlined in my recent book, Putin’s Master Plan, is designed to force the breakup of the NATO alliance and could potentially to war with the West.

While the West currently has no plan, no strategy, and no tactics as a result of Obama’s feckless leadership, we must demand that the incoming Trump administration and his foreign policy team will go further to defend our allies’ freedom and sovereignty, build on these sanctions, and promote further measures to punish the Russians for interfering with the security of the United States and its’ democratic system.


Douglas E. Schoen has served as a pollster for President Bill Clinton. He has more than 30 years experience as a pollster and political consultant. He is also a Fox News contributor and co-host of "Fox News Insiders" Sundays on Fox News Channel at 7 pm ET. He is the author of 13 books. His latest is "Putin's Master Plan" (Encounter Books, September 27, 2016). Follow Doug on Twitter @DouglasESchoen.