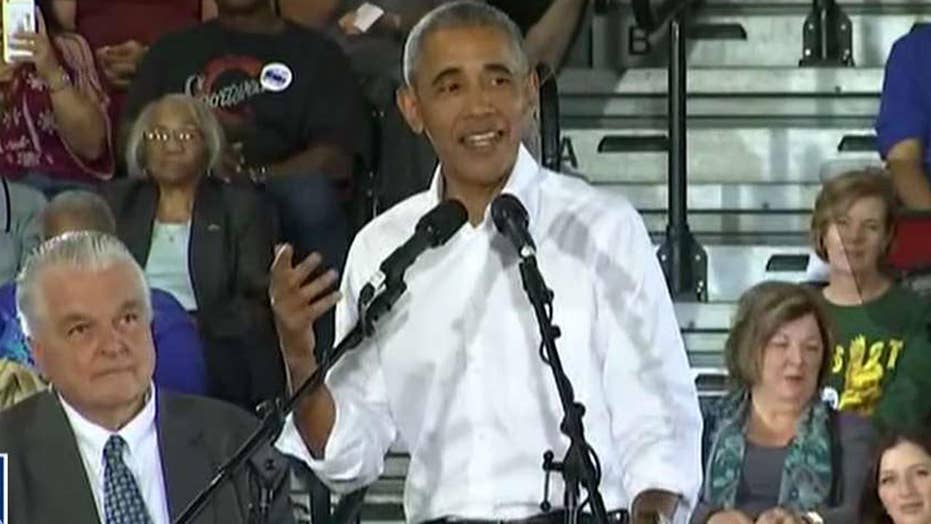 At a campaign rally Monday in Las Vegas, former President Barack Obama continued to perpetuate the myth that his policies – not those of the Trump administration – are responsible for today’s booming economy.

“So, by the time I left office, wages were rising, the uninsured rate was falling, poverty was falling, and that’s what I handed off to the next guy,” Obama said. “So, when you hear all this talk about economic miracles right now, remember who started it.”

Despite the former president’s grand claims, the Obama economy was historically poor. He presided over the slowest economic recovery in modern American history.

And even though the federal government under President Obama added more to the national debt than under any other president, during Obama’s eight years in office annual gross domestic product never reached a growth rate of 3 percent for a single year. He was the first U.S. president who failed to reach that mark.

Unemployment for women also improved by just one-tenth of a percentage point. Unemployment for Hispanics remained flat over the same period, at 5.9 percent. And at the time of the 2016 election, African-American unemployment still hadn’t reached pre-recession levels.

Even worse, enrollment in welfare programs like Medicaid and food stamps skyrocketed under the Obama administration. For example, the average number of people receiving food stamps in 2016 was 44.2 million – 11 million more than the average enrollment in 2009, when President Obama was inaugurated.

The Trump administration inherited a sluggish economy and a bloated government full of waste and unnecessary regulations. But in fewer than two years, President Trump and congressional Republicans have presided over the economic comeback story of the century.

The stock market has broken numerous records, boosting retirement accounts for millions of Americans. Gross domestic product growth reached an annualized rate of 4.2 percent in the second quarter of this year – the highest rate in four years

President Trump and congressional Republicans have presided over the economic comeback story of the century.

Instead of trying to tax, spend and regulate the economy back to its former glory, the Trump administration has catalyzed economic growth by eliminating burdensome regulations and helping people keep more of their own money.

After an unprecedented growth in the number of regulations added under the Obama administration, President Trump and congressional Republicans have cut red tape, freeing businesses from the shackles of slow-moving bureaucrats in Washington.

According to a report by the American Action Forum, the Trump administration has saved more than $1.3 billion thus far in 2018 by engaging in 47 deregulatory actions – nearly double the administration’s targets.

Similarly, rather than try to drive traditional energy industries out of business, President Trump has agreed to roll back the Obama administration’s jobs-killing Clean Power Plan.

In addition, President Trump has announced the United States’ intention to pull out of the Paris Climate Agreement. And his administration has worked tirelessly to open up America’s lands and seashores to oil and gas development that will create good-paying jobs, lower our trade deficit and make us less reliant on foreign energy supplies.

These efforts have had a tremendous impact on skilled laborers. President Trump and Republicans have helped the economy add millions of jobs in the manufacturing, mining, logging, and oil and gas extraction industries.

Republicans also boosted the economy by passing the Tax Cuts and Jobs Act in December 2017. The tax reform cut most tax brackets. It doubled the standard deduction – to $12,000 for individuals and $24,000 for married couples. And it doubled the child tax credit to $2,000.

The economic growth spurred by the tax cuts has helped to offset the costs of cutting tax rates. Tax revenues increased slightly in fiscal year 2018, from $3.315 trillion in the 2017 fiscal year to $3.329 trillion.