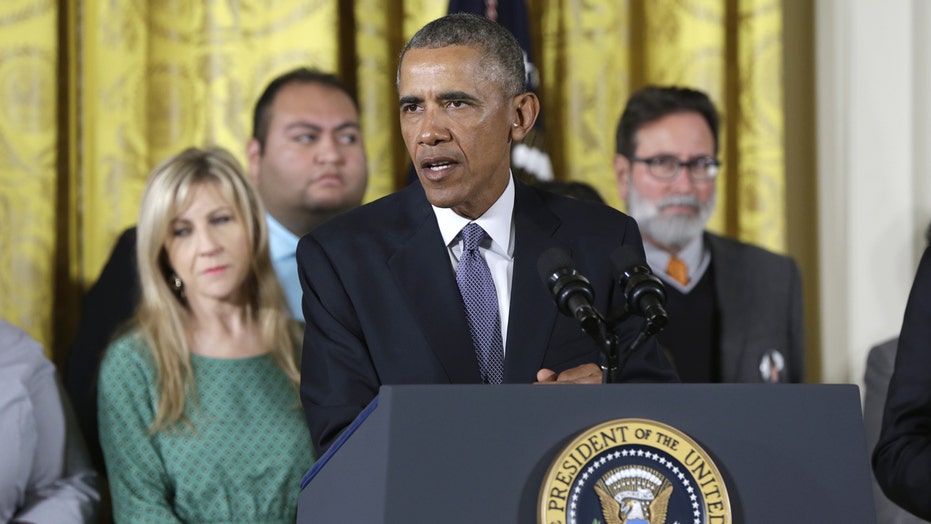 After President Obama cried while announcing a series of “commonsense executive actions” on gun control, his rare display of emotion stirred plenty of debate.

Would the steps he outlined have prevented any of the recent mass shootings?  Why is he circumventing Congress again?  Were his tears even real?

Yet here’s another one that we ought to consider:  Why would someone cry over gun control and mass shootings while simultaneously freeing more terrorists?

Seriously, does that make any sense at all?

The president acknowledged that America’s murder and violent crime rates have steadily declined for years while gun ownership has skyrocketed.  He also recognized the limitations of laws in preventing gun violence, noting “some criminals will be able to get their hands on firearms even if there’s a background check.”

Despite knowing the facts, his position didn’t budge an inch.

Nor has his position on emptying Guantanamo.

He knows our intelligence authorities report that nearly 1 in 3 ex-detainees are confirmed or suspected of returning to terrorism, yet just this month he’s releasing 17 more hardcore jihadists.  And of the 107 left, we’re talking about Bin Laden bodyguards, bomb makers, weapons trainers and other dangerous men still committed to kill Americans.

If that’s not bad enough, Team Obama continues to spin the world on all things Gitmo -- from recidivism, to cost, to what would happen if they make it stateside.

On recidivism, in shady accounting that even Bernie Madoff would envy, the White House has changed its talking point to say “less than 10 percent” have returned to terrorism.  But when you dig a little further, that blanket stat only pertains to under their watch, thus not counting anyone who left under the Bush administration.  Nice.

On cost, they cite $3 million a year, per detainee.  Well, that’s because 2,000 troops are assigned to guard them, the same number who took care of 780 detainees.  Which means each detainee has his own doctor or nurse, because the medical unit is still about 100.  Let’s not forget the 4 catered halal meals a day, with imported dates and roasted meats.  And just think, Mr. Obama says there’s “nothing Islamic” about jihadists.  So why the month long nightly Ramadan feasts?

On moving them to the U.S., federal judges could release them onto Main Street.  That’s because we didn’t have battlefield detectives chasing them in Afghanistan and Pakistan, so there isn’t enough evidence to convict most in court.  About half of the detainees are held in indefinite detention, which would get struck down by activist judges as soon as they arrived in Colorado, Kansas and South Carolina, if the White House plan goes through.  Not to mention turning those states into terrorist targets.

Americans are being misled on a massive scale, that’s what.  On gun control and terrorists.

Because the Obama White House is committed to a far left ideology -- determined to transform America.

Their vision of our nation was forged right here on university campuses, places now run by the anti-war, “flower power” generation of the 1960s.  Indoctrination centers where the U.S.A. is portrayed as a racist country known for slavery, Jim Crow Laws, decimation of Native Americans and the A-Bomb.

Seen from that Ivory Tower, American power is the problem.  Therefore anyone challenging us must have a legitimate grievance, so the theory goes.  Which explains the obsession to free terrorists, and one-sided peace overtures to hostile dictators in Iran and Cuba.  Weakness towards others, like in Russia, China, Syria and North Korea.

Can anyone picture Amnesty International running America?  Like John Lennon said in his epic song "Imagine," "it's easy if you try."

Folks in the faculty lounge also view average Americans as the problem.  To them, we’re clearly not responsible enough to own guns.  Just a nation of violent bubbas, low-information voters.

Thankfully, the Congress has stood tough on both guns and Gitmo.  Yet in his last year, President Obama and his inner circle will do everything in their power to rule by decree.

So even though we’ve now seen a commander-in-chief who cries over strawman arguments, Americans ought to see right through it.

J.D. Gordon is a retired Navy Commander who served as a Pentagon spokesman in the Office of the Secretary of Defense from 2005-09. He serves as senior adviser to several Washington-based think tanks.