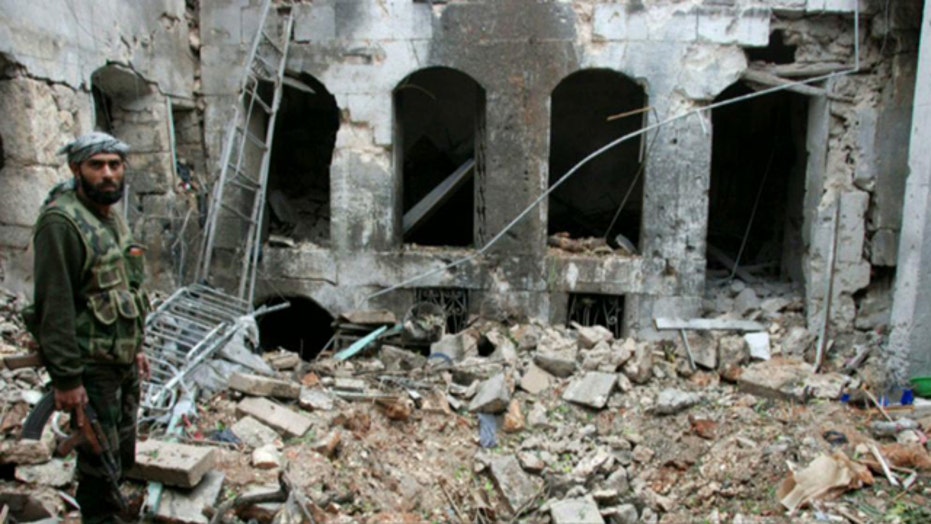 Analysts: Syria in danger of becoming next Somalia

In Syria, the motto for stopping the bloodshed might be summed up this way: when the going gets tough, the tough hold a conference.

That’s the latest word from Secretary John Kerry and his Russian counterpart Sergey Lavrov who are planning the event for some time in June.

Neither Assad, nor the opposition, has committed to attend.

Meanwhile, the United Nations General Assembly President Vuc Jeremić raised the number of dead on May 15 to “at least 80,000 people, most civilians.”  Syrian NGOs this week put the figure at more than 94,000.

With the Assad regime busy adding to the death toll, and rebels recently releasing a video of one of their own cutting out and then eating the heart of a Syrian soldier, the unfortunate reality is that good guys are few and far between.

Cannibalism versus mass murder appears to leave poor President Obama in a quandary not of his own making. But the reality is that it is the president who has repeatedly miscalculated on the Arab “spring” and who early on emboldened President Assad.

Obama sent a U.S. Ambassador to Syria for the first time in six years with no promise of reform in return. Obama’s Secretary of State gave traction to the claim that Assad was “a reformer.”

Closely interconnected to Assad’s bloody calculation is the administration’s dithering on Iran. The Iranians don’t see the downside from backing Assad, just as they don’t fear anything from President Obama except more hot air.

The “door is still open” but the “window is closing” routine is by now a standing joke.

In April at his first Senate Committee on Foreign Relations hearing following his confirmation, Kerry analogized the Iranian and American election processes and said we couldn’t possibly do anything on Iran until their June so-called “elections” had played themselves out.

Similarly, the administration’s bungling of America’s relationship with Russia has also licensed Assad. Kerry was in Russia on May 7, 2013 talking a Syrian conference at the same time that the Russians were giving the green light to sell Syria advanced ground-to-air missile systems.

So, yes, it’s now all so complicated.

Syrian forces use chemical weapons on their own people.  On May 5, 2013, a UN Syria inquiry official said there was strong evidence that Syrian rebels have used chemical weapons.

And then there’s the impotent United Nations. Security Council action is stymied by the Russian veto.  So on Wednesay, the General Assembly adopted a resolution introduced by Qatar. The vote was 107 for, 12 against and 59 abstentions – that’s barely half in favor of coming down hard on Assad.  The accompanying UN press release opens with this: “the General Assembly took action…” Action, UN-style.

Secretary Kerry says the forthcoming conference will be driven by an agenda which does not call for Assad’s ouster but lets the parties decide on transitional players “by mutual consent”  – notwithstanding they can’t agree on anything else.

Americans are genuinely concerned by the horrific human rights violations in Syria but are not interested in installing and promoting one more anti-American and anti-Israel Arab government at their expense.

The Obama administration has made a mess of it, in large measure by taking its eye off the Iranian ball. Get serious about Iran and its client states and terror satellites will feel the blow.