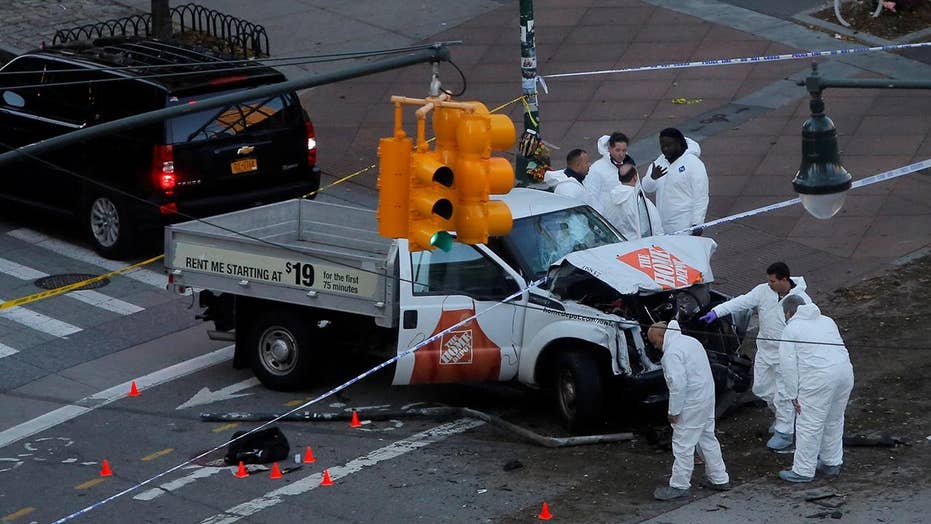 Deadly vehicle terror attacks have occurred across the globe. A look back at those attacks from Jerusalem, Paris, and London to New York City

While the Islamic State is in the midst of a rout in Iraq and Syria, New York City suffered a horrific attack on Tuesday because the ideology of ISIS lives on.

Sayfullo Saipov, a green card holder originally from Uzbekistan, rented a Home Depot truck and ran down dozens of people in lower Manhattan on a bicycle path, killing eight and injuring fifteen. A city that was preparing for a night of Halloween festivities was once more forced by a deranged zealot to mourn its dead and redouble its vigilance against radical Islamic terrorism.

But what can we do to stop the next attack?

There is no one solution, and even a multi-pronged effort will not succeed in defeating every plot. Counterterrorism experts face a growing challenge with the increased frequency -- and casualty count -- of vehicle attacks over the last 12 months. Many of the primary tools that intelligence officers and law enforcement use to disrupt plots are largely nullified when terrorists weaponize everyday vehicles.

Once a radicalized mass murderer like Saipov has become operational and gotten behind the wheel of a vehicle, it is too late.

This is a troubling tactical evolution in the fight against terrorism. Bomb-making even at a rudimentary level with household ingredients, requires some skill and practice. Failure on the part of the bomber, as was the case with the Faisal Shahzad, the “Times Square Bomber,” in 2010, has often prevented a terror attempt from becoming a mass casualty incident. Even the procurement and construction of explosive material creates opportunities for law enforcement, or an alert civilian, to intervene.

The same is true for procuring firearms. Laws governing the sale of guns are a hurdle for terrorists, and alert firearms dealers provide an additional tripwire against would-be jihadists. Law enforcement efforts, such as the NYPD’s “Shield” program, that work to inform and partner with private businesses and citizens to be aware of terror plotting precursors, especially at rental car agencies, can also play an important role in disrupting plots.

But with vehicle terror attacks, the ease of planning is a huge part of the problem. Anyone can drive a vehicle, and anyone can pick a crowded area of a major city to create a kill zone for pedestrians and bicyclists.

Once a radicalized mass murderer like Saipov has become operational and gotten behind the wheel of a vehicle, it is too late. At that point, it will usually be a question of law enforcement mitigating casualties, not preventing them.

This is not to say that nothing new can be done to address the threat. On the contrary, it is incumbent upon intelligence and law enforcement to redouble their efforts to identify jihadists before they can strike. The NYPD and FBI will be going over every possible missed opportunity to avert the attack, and will adjust their techniques and procedures accordingly.

Awareness of the threat among the general public, and continued outreach to the Islamic community to monitor for signs of violent extremism, is also a major piece of this effort.

But the horrific events in New York City, in the shadow of the 9/11 memorial, are a reminder that we are still very much at war with radical Islam and that any U.S. street can become a battlefield in that struggle. This fight is far from over.