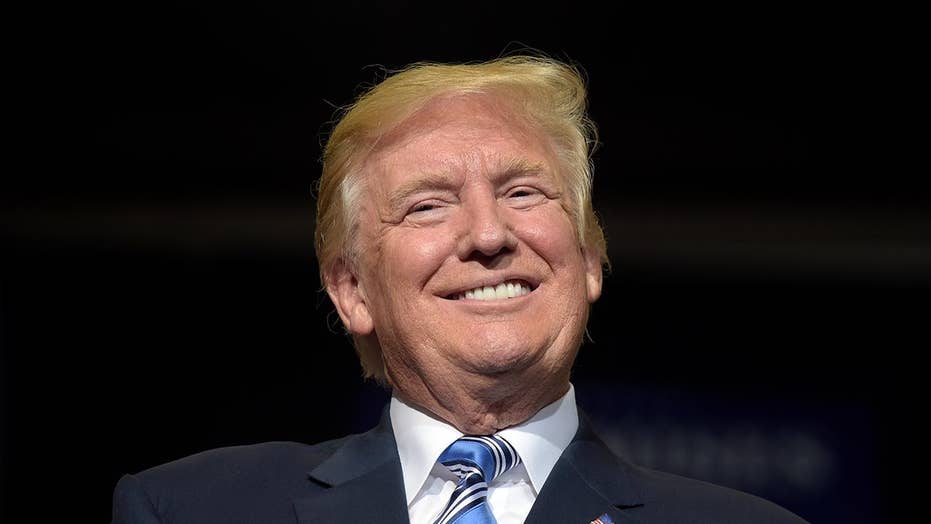 Trump’s wins: What the mainstream media isn’t telling you

President Donald Trump is notching victories when it comes to the economy, markets and the federal courts. Here are the big wins you’re not hearing about

The front page of The New York Times still includes the motto: “All the News That’s Fit to Print.” Some days it’s even accurate. But that wasn’t the case on Tuesday.

The Times ran an epic disaster of a news story, claiming that “scientists say they fear the Trump administration could change or suppress” a draft report on climate change produced by scientists from 13 federal agencies that “directly contradicts claims by President Trump and members of his cabinet who say that the human contribution to climate change is uncertain.”

The article was in the top spot of the front page, in the upper-right-hand corner with three sets of headlines, stacked on top of one another. You could almost imagine Times staffers high-fiving as they wrote each word – another Resistance victory!

My favorite phrase was “fears of suppression.” That referenced the paranoia of anti-Trump forces in the administration. “One government scientist who worked on the report, and who spoke to The Times on the condition of anonymity, said he and others were concerned that it would be suppressed,” wrote climate change stenographer Lisa Friedman.

The whole premise of the story was that this report was leaked to The Times out of fear that evil President Trump would hide it. Except the report has been available online since January. The basic premise of the entire story of “suppression” was laughably wrong. Seven months worth of wrong.

The paper added a lame correction the next day with a deer-in-the-headlights surprise that it had somehow been inaccurate. Washington Post media writer Erik Wemple gutted The Times for the “screw-up” and its gross incompetence: “That correction, which sits at the foot of the story, dutifully straightens out the record. Yet given the magnitude of the screw-up, it should sit atop the story, surrounded by red flashing lights and perhaps an audio track to instruct readers: Warning: This story once peddled a faulty and damaging premise,” he wrote.

Imagine if a conservative outlet had published something this horrendously wrong. The journalism community would scream “Fake news!” and claim that outlet was irresponsible. But when it’s one of news organizations journalists love, all will soon be forgiven.

Until the next time. Which takes us to the rest of what was horrible this week:

2. Google Doesn’t Believe In Freedom: Google the phrase, “Google doesn't believe in freedom,” and you should see stories about its former employee James Damore. Damore is one of those windmill tilters who would have made Don Quixote proud. Damore worked for Google as an engineer.

Damore made the mistake of writing up a big memo about the flaws in Google’s diversity initiatives, but stressed he was pro-diversity. “I strongly believe in gender and racial diversity, and I think we should strive for more. However, to achieve a more equal gender and race representation, Google has created several discriminatory practices,” he wrote.

Liberals were triggered and Google fired Damore, creating a firestorm as Social Justice Warriors gathered Twitter mobs to destroy Damore. Journalists repeatedly misrepresented what he wrote, eager to crush people who challenged someone “Game of Thrones” fans might call the Great Sept of Diversity.

One New York Times writer called what Damore wrote the “sexist/racist writings like the Google memo.” No bias there, never! CNN misrepresented the memo and called it an “anti-diversity manifesto.” That’s the tag team of irresponsibility – claiming it’s anti-diversity when Damore said he’s not and then titling it a “manifesto,” just like the Unabomber. The “anti-diversity” phrasing was common – from CNBC to Fortune and even Reuters.

Journalists love diversity. Until you tell them, as Damore did, it should include diversity of opinions. Conservatives who are used to mistrusting major media outlets should add Google to that list of businesses that embrace the liberal agenda as doctrine. Before we’re all marched down some internet street as the mob shouts, “Shame!”

3. CNN Purges Pro-Trump Jeffrey Lord: Firing people for their politics is all the rage. CNN dropped pro-Trump commentator Jeffrey Lord after Lord had a testy exchange with a lefty activist on Twitter, ending the exchange by mockingly tweeting, “Sieg Heil!”

Lord (who writes occasionally for Newsbusters, where I work) pointed out that there’s an obvious left-wing campaign against Fox News. After a testy exchange, he posted a link to a column calling that campaign “fascist.” Lord’s piece stressed: “This is America … Not Fascist Italy, Nazi Germany or Communist Russia.” Unfortunately, lefty activists keep trying to reset the GPS.

Hardly the guy sane people seek as an ally. But Trump’s strong words against Kim have caused the media to stand up … to Trump. Repeatedly.

CBS turned to former Clinton aide Jake Sullivan to bash Trump and then let him get away with it. “It just doesn't help when our allies and the countries in the region can’t tell whether it's Donald Trump or Kim Jong Un who's the crazier one,” said Sullivan. CBS staff? Crickets.

MSNBC called Trump’s response to North Korea’s continued threats of nuclear attack, “a far more stark, a far more inflammatory, a far more dangerous red line.” The networks reliably turned to Republicans who would speak out against Trump, and polls that undercut him amidst a dangerous crisis.

5. Guess What’s Left Out Of All The Gore Coverage?: With all the coverage of former Vice President Al Gore, it’s almost like he has his own TV network. Oops, he tried that once, before selling it to the oil nation of Qatar while telling all of us that oil money is dirty. But there’s one story getting little attention at all.

Gore bought carbon offsets for his first film 11 years ago, some of which have gone toward … absolutely nothing. All of the carbon from “An Inconvenient Truth” was “offset” for the Owl Feather War Bonnet Wind Farm on the Rosebud Sioux Reservation in South Dakota. Those offsets cost all of $1,000 out of Al’s mighty war chest.

Eleven years later, Gore is still using the same carbon offset company and the wind farm still isn’t built. Rather than focus on how silly carbon offsets are, the media just continue to talk Gore. They tried and failed to help his sequel break into the top 10 movies. But Gore-adoring journos are unlikely to start poking into things that embarrass him – like talking about how he flies more than many jet pilots and tells us all that fossil fuels are bad.

How come journalists won’t ask the guy involved in creating the internet why he never heard of Skype or telecommuting?

6. Hollywood Hates Conservatives This Much: It’s not even fall TV season. All we have now is the summer filler schedule and it’s filled alright – with vicious attacks on people the networks consider evil – conservatives or Republicans. It’s like conservatives are the ordinary soldiers lined up to fight Daenerys Targaryen, waiting to be barbecued by her pet dragon. Go get a group together and ask them, if you have a dustpan and brush.

Here are just a few highlights from one week of summer TV. Again, this is just one week.

Hulu’s “Difficult People” called Vice President Mike Pence a “failed prototype for one of those Japanese sex robots” and presented the new seal of his office as a swastika. That pales by comparison to Netflix’s “Wet Hot American Summer: Ten Years Later,” which depicted both President Ronald Reagan and VP George H.W. Bush defecating graphically on an architectural model Reagan didn’t like. (Doubt me? Here’s video.) A character in FX’s “Snowfall” even casually threw darts at a large picture of President Ronald Reagan.

Actor/activist James Cromwell told The Daily Mail that Hollywood needs to become more activist. “This community’s got to get more political,” he argued.

One wonders how that would even be possible.