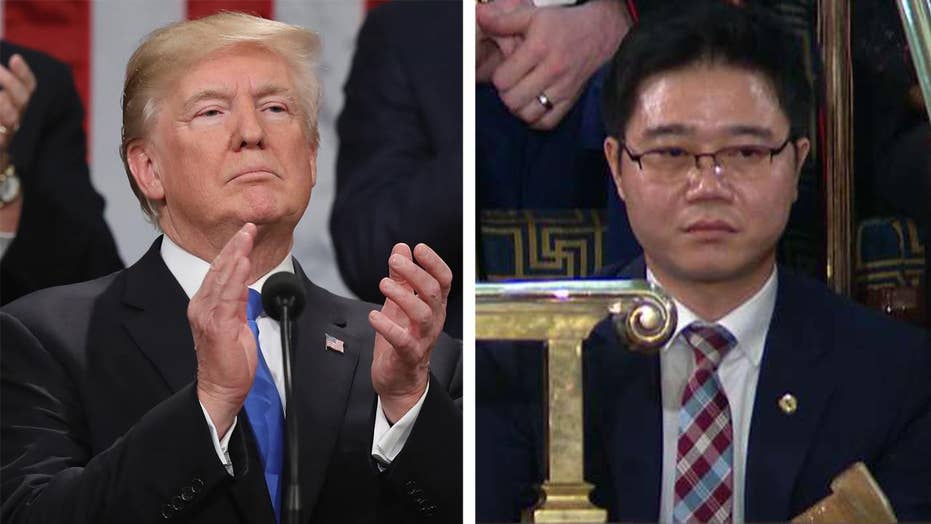 Trump praises North Korean defector in State of the Union

Ji Seong-ho holds up his crutches as symbol of defiance to the North Korea regime after President Trump details his harrowing journey to freedom.

The eternal quest for freedom has the power to change lives, shape nations and topple the most brutal of dictatorships. It’s why my grandfather left Greece for America after Nazi Germany shattered his home and threw him and his father in a prison camp—scheduled for execution just days before they were freed by the Allies.

It will be that same quest for freedom that ends the North Korean regime.

Indeed, President Trump’s State of the Union speech showcased how the simple image of one man, standing up for freedom – in this case, the powerful symbol of a North Korean defector named Ji Seong-ho, hoisting his old crutches in the most compelling act of defiance I have ever seen against the Kim regime – can signal why North Korea’s fate is sealed. Kim Jong Un’s band of bad guys will be swept into the ash heap of history. It is a question of when, not if.

While the tired talking heads on the left will spend the next day or so trashing President Trump on his immigration policies or attacking his tax plan, what they need to pay attention to is the moral smackdown he delivered to the hermit kingdom.

For if it wasn’t clear by now, Team Trump is clearly laying down a marker: North Korea will be the foreign policy issue for this administration for the months and likely years to come. Forget ISIS, Iran or Russia—taking on the Kim regime and its growing nuclear arsenal is Trump’s greatest challenge, bar none. And now, we have a powerful symbol that can only serve as a rallying cry to inspire the imagination of the American people that such a policy is the right one.

Kim Jong Un won’t get much sleep after President Trump’s speech, as he knows time is not on his side. And it took the power of just one man with his old crutches to prove it.

Going into the speech, I was concerned that the president might deliver some sort of ultimatum, maybe even tease out some sort of possible plan that a “bloody nose” strike was in the offing. But such talk, at least for now, seems off the table. President Trump embraced the idea that a “maximum pressure” campaign will continue to be the policy of his government and talk of “fire and fury” seems relegated to the past. Containment and deterrence seem to have taken hold as the preferred policy of the administration, a wise and smart decision.

But let there be no doubt, challenges will remain—and some dangerous times lie ahead. While next week we will witness a historic Olympics marked by what appears to be Pyongyang and Seoul coming together in an act of historic unity, it will be shattered after the games end. North Korea will demand the ending of joint U.S.-South Korean military exercises in late April as the price for continued talks, something the Kim regime is already pushing in their state media. When Washington and Seoul refuse, look for the North to once again begin testing missile and nuclear weapons, perhaps this time firing a long-range missile with all the capabilities needed to hit our homeland with an atomic payload. It will be on that day that President Trump will have a tough choice to make, one that no commander-in-chief ever takes joy in.

The good news, if there is any, is that no matter what happens with North Korea, we already know the fate of the 25 million souls living behind the one last iron curtains on planet Earth. Regimes like the one Kim Jong Un operate—with perhaps as many as 200,000 people in what can only be described as gulags— never last forever. Right now, brave North Koreans are watching illegal programing on prohibited DVD players thanks to smuggled in flash drives, as the outside world slowly permeates in day by day. As you read this, a North Korean somewhere is reading a smuggled in Bible or religious text, discovering the joys of faith that will give them the power to question the evil of the Kim dynasty. North Korea’s fate is sealed, and it will be in our lifetime that we will know a world where such a nation will be no more.

History proves time and time again that the yearning for freedom will crush the jackboots of the vilest dictators. Kim Jong Un won’t get much sleep after President Trump’s speech, as he knows time is not on his side. And it took the power of just one man with his old crutches to prove it.