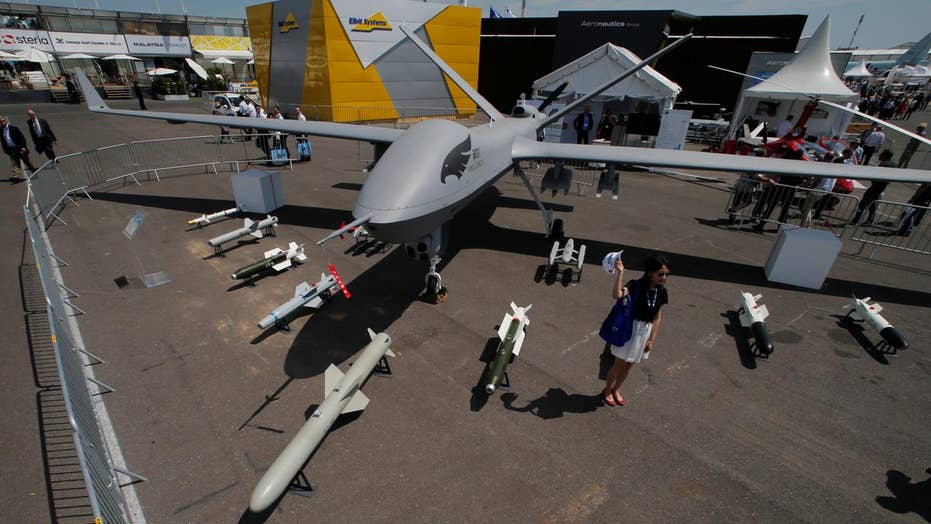 Chinese drone: Why China's new aircraft should concern US

China unveiled a new drone at the Paris Air Show that looks very similar to the U.S. Reaper. Defense Specialist Allison Barrie explains why the United States should be concerned

President Trump on Friday declared that the “era of strategic patience with the North Korean regime has failed,” thankfully turning the page on the Obama Administration's disastrous policies towards Pyongyang.

But America’s woes in Asia don’t stop with North Korea. In fact, the challenge Washington faces in that vital part of the world are much bigger. The good news is that the Trump Administration does have a narrow window to do something about it—before it's too late.

Now is the time for Washington to end the era of “strategic patience” with another rogue regime, one that is not only aiding North Korea’s military rise but is also on a crash course to dominate the Asia-Pacific.

That country is none other than the People’s Republic of China.

To be fair, the challenge China has posed to U.S. national security always seems to be get placed on the backburner, to be dealt with another day—something both Democrat and Republican administrations are guilty of.

The reasons are obvious. Years of combat in Iraq and Afghanistan, a great recession like no other, a Syrian civil war that seems never ending, tensions with Russia and now an epic struggle to ensure ISIS is simply no more have all ensured Beijing gets a pass for its actions -- time and time again.

As Washington cast its focus everywhere else, China has decided to shed the notion of a so-called “peaceful rise," and instead pursue a dangerous course of action that is only leading to rising tensions with America, and if successful, will turn Asia into Beijing’s own private sphere of influence.

How China has worked to achieve its goals is clear, and in fact, is very much out in the open.

First, Beijing has done all it can to create an arc of instability, from the East China Sea all the way to the very ends of the South China Sea to advance its agenda. China prods and pushes its claims of “indisputable sovereignty” in all directions along this track, using civilian ships like fishing vessels, a dangerous maritime militia, and coast guard vessels that are many times nothing more than redesigned Chinese naval vessels, to ensure its mastery of the seas around them. Its goal is to turn such vital waterways into extensions of its territory, or what it calls “blue national soil."

Indeed, Beijing’s actions in the hotly disputed South China Sea deserve special attention. The beating heart of Asia’s economic miracle, China has literally drawn borders around this critical part of the global ocean commons. Called the nine-dash-line, China has done what no other nation has dared to do in centuries: place outlandish claims over vast waterways, that if enforced, would destroy the notion that oceans and seas can be claimed by no one. Beijing has even gone so far as to build island military bases out of small rocks and reefs in the area, tipping the strategic balance in its favor.

Next, to ensure the region takes China’s claims seriously, Beijing’s military might has advanced by leaps and bounds. Experts inside the Pentagon have privately told me that they fear America may now lack the ability to protect its interests and allies against China if conflict did break out—unless Washington was willing to accept casualties not seen since the Vietnam War, or worse.

Beijing’s strategy to dominate Washington in a conflict is also quite clear. Knowing that it still can’t match America ship for ship or plane for plane, Beijing has developed countless classes of deadly missiles. In the event of a conflict over Taiwan, the South or East China Seas or in Korea, China would shower U.S. bases, warships or allies with potentially thousands of missiles. And worst of all, thanks to treaty commitments agreed to with the now defunct Soviet Union, Washington is unable to legally build land-based missiles in the ranges needed to respond in kind.

But for Beijing this is simply not enough. China has even decided that it must begin to match America in as many possible areas of traditional military might as possible. Through cyber espionage, it has stolen classified data involving some of America’s most advanced military platforms. Such theft has included data on the F-22  and F-35 stealth fighters, the THAAD missile defense system and many others. Take a look at China’s latest stealth fighter, the J-20. See a resemblance to America’s stealth weapons? The reason is obvious.

For Washington and its allies, the accumulation of Chinese economic, military and diplomatic muscle means the international community can no longer ignore this threat.

Considering all of this, now is the time for America to push back against Chinese acts of aggression—and not through failed foreign policy slogans like a “pivot” or “rebalance”—but through actual deeds.

The Trump administration must develop a comprehensive strategy to ensure that Beijing does not dominate the Asia-Pacific, bully our allies or partners in region, or is able to defeat Washington in a military conflict.

Let there be no doubt, the growing threat of a nuclear North Korea compounded with the rise of China and its aggressive acts to ensure it dominates Asia are the two biggest foreign policy challenge America faces today. There can be only one response: when it comes to Trump’s foreign policy strategy, “America First” must mean Asia is the top priority above all else.

It's well past time that Washington make ‘Asia First’ a slogan it will put steel behind. There simply is no other choice.