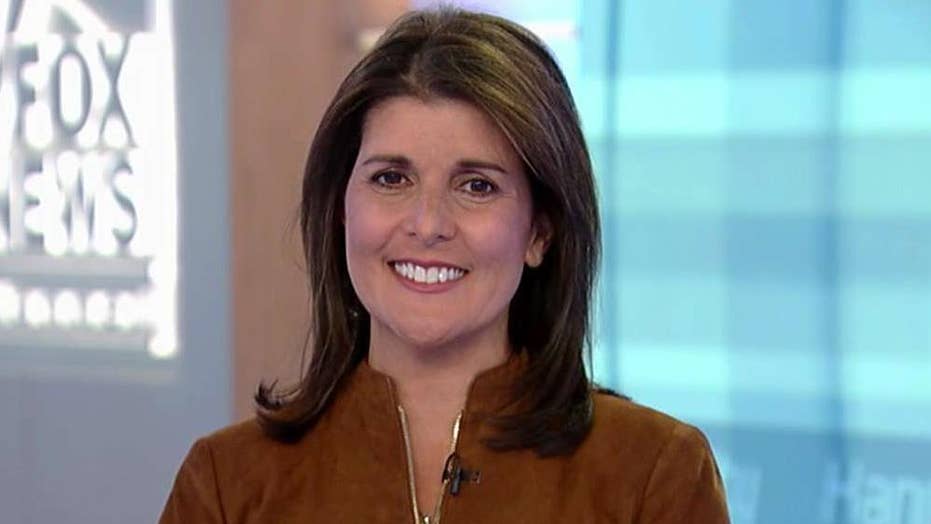 Haley: It's in our interest to have communication, relations

Outgoing U.S. Ambassador to the United Nations Nikki Haley weighs in on U.S. relations with Russia.

God bless Ambassador Nikki Haley. She left the UN shell-shocked to the end, lobbing bombshells even as she packed up during her last day on call at Turtle Bay. “UNESCO is among the most corrupt and politically biased UN agencies,” she tweeted while waiting to give her final speech as the U.S. representative.

What stunned so many world officials? Quite simply, it was the fact that Haley was so frank about the U.N.’s shortfalls. Even worse from their point of view, she was a textbook conservative voice at the General Assembly.

Haley pushed for the U.S. to dump its support for counterproductive organizations such as the execrable “Human Rights Council,” which she rightly labeled “a cesspool of political bias.” Haley made the case for accountability and fiscal responsibility. And she criticized UN “peacekeeping” missions that did a poor job at keeping the peace, such as the current failure in Lebanon.

After this week, though, Haley won’t be tweeting from U.N. headquarters anymore. Not only is she leaving the administration, the U.S. government made her give up her Twitter account. Still, odds are, like the Terminator, she’ll be back — a strong conservative voice in American national policy.

Meanwhile, what the U.N. can expect from the next U.S. ambassador is a lot more of the same. This administration is wrongly accused of shunning multi-national and international organizations and institutions.

German leader Angela Merkel delivered just such a veiled criticism of Trump’s team the other day. Like so many others, Merkel muddles Trump’s rhetoric with his policies. The U.N. is a case in point. The U.S. has used the stage at the UN very effectively, including a powerful defense of popular sovereignty from the president.

The administration has used its vote in the Security Council with authority, including blocking multiple efforts to defame valued U.S. allies. The U.S. championed reform — trying to make the U.N. work better — not abolish the body.

The U.S. sticks around (and ought to continue to stick around), for one simple reason: there is American business there to get done. The world just needs a better, more accountable U.N.

The administration has used its vote in the Security Council with authority, including blocking multiple efforts to defame valued U.S. allies. The U.S. championed reform — trying to make the U.N. work better — not abolish the body.

Rather than the U.S. leaving, the freeloaders, hate-mongers, and globalists at the U.N. ought to worry about getting another dose of tough love from America.

For starters, the U.S. will likely continue to review the mandates of ineffective peacekeeping missions so they can be either reformed or abolished. MINUSMA in Mali is a good example. Currently about 80 percent of the “peacekeepers” are there to protect the peacekeepers — a mission that makes no sense.

Expect the next U.N. ambassador also to press that the tax dollars we give the U.N. are used efficiently and effectively. Right now there is gridlock. Lots of people want to add mandates. Nobody wants to spend more money, unless it’s from us.

As a result, more and more of the budget is stretched to spend on stuff that is simply a waste. Case in point: the UN’s regional economic commissions. There is a commission for every region, even Europe, totaling over half a billion dollars.

That’s right, in the case of Europe, tens of millions are spent every year on the U.N. giving economic advice to some of the world’s most developed economies. That makes about as much sense as the U.N. lecturing the U.S. on poverty — which it did.

And, for sure, expect the next ambassador to continue pressing for more transparency and accountability. The U.N., for example, still woefully lacks adequate whistleblower protections. The case of Anders Kompass is a sobering reminder. Kompass exposed widespread sex abuse in an African peacekeeping mission. His reward was having to resign as a U.N. official.

Who will carry on this work? There is a good case to be made that Heather Nauert, nominated by the president, would make a worthy successor to Haley. Despite some lame attempts to impugn her qualifications, she is more than qualified.

There’s only one real objection to her nomination, as far as liberals are concerned: she will be carrying on policies that are not only right—they’re working.