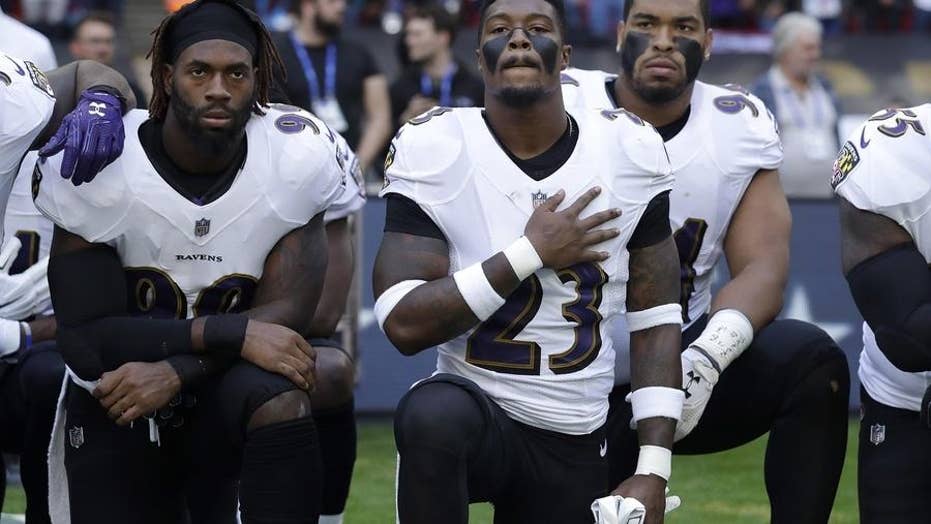 Are football fans going to boycott the NFL over protests?

As more than 100 NFL players protested during the singing of America’s national anthem across the country Sunday, what had been a small protest of the way police treat African-Americans turned into a much larger protest directed at President Trump.

The flare-up started on Friday with the president’s blistering attack against the NFL, the NBA and several players, telling a political rally in Alabama: “Wouldn't you love to see one of these NFL owners, when somebody disrespects our flag, to say, 'Get that son of a b---- off the field right now.' "

President Trump continued his barrage over the weekend via Twitter, calling on NFL owners to “fire or suspend” players who kneel during the anthem and saying that fans should boycott teams with any kneeling players.

Yet lost in the war of angry tweets and protests is the original reason for the fight:  alleged police mistreatment. Groups like Black Lives Matter and sports figures like Colin Kaepernik have long held that there is widespread police violence against black and brown people in America.

Kaepernik said: “I am not going to stand up to show pride in a flag for a country that oppresses black people and people of color…. There are bodies in the street and people are getting paid leave and getting away with murder.”

But is he right? A study by Harvard University says no.

In 2016, Harvard Professor Roland Fryer – an African-American academic who focuses on economics – decided to examine whether the nation’s police officers were killing black Americans more so than whites. When he launched the study, he fully expected to find a clear pattern of unjustified violence.

Fryer looked at four national databases of crime statistics representing police-civilian confrontations from diverse states like Florida, Texas, and California. After rigorous analysis, it turned out that he, Kaepernik and Black Lives Matter were all wrong.

Indeed, Fryer’s study showed that American police officers were not killing black people at a rate any higher than whites.

In short, the nation’s protectors showed no racial bias when it came to deadly force.

Fryer called it “the most surprising result of my career.”

Still, the study did show something troubling. Black and brown Americans were more likely to be touched, handcuffed, pushed to the ground or pepper-sprayed than whites during similar altercations.

All told, Fryer gave the American people an important gift in the combustible debate of racial violence. Using data science, he showed that the nation’s police officers were not out-of-control killers but committed professionals largely conducting themselves with honor.

And that leads us back to the president’s fiery condemnation of athletes who refuse to stand and show respect for our national anthem.

Simply put, President Trump is right to say that sports stars like Kaepernick aren’t helping the nation’s racial divide when they take a knee in protest of America’s cops.

That’s not an opinion. That’s a reflection of facts.

President Trump is also right to say that Kaepernick and his supporters deserve a degree of scorn for their behavior. After all, they’re inflaming racial tensions and hatred of our country without justification.

In other words, firing them sounds pretty reasonable.

Still, the Harvard study speaks to an uncomfortable truth: all is not well with how America treats our black and brown citizens. And it extends beyond the realm of criminal justice.

Consider employment. Studies show that resumes with names associated predominantly with black people (Lakisha or Jamal) get less interest than resumes with names without a racial association (Emily or Greg), even though the resumes are identical.

Why is that? Are most employers simply racist?

Kaepernick would likely say yes. And, to be fair, maybe some are. But the truth is more complicated.

Imagine you’re walking down a dark alley and you see a group of hooded black men walking towards you. They could be Baptist missionaries looking for lost souls, it’s true, but most reasonable people would assume otherwise.

In fact, it’s an assumption that even black men acknowledge they make about other black men.

For better or worse, our brains are hardwired to embrace stereotypes. It’s a system built within our species that helps us quickly assess both threats and opportunities.

Stereotypes are based exclusively on the information we feed our brains. If we know a lot of Lakishas and Jamals, for example, we’re more likely to give them a fair shake if our experiences have been positive.

However, if we rarely interact with a certain group – say, black men in general or Lakishas and Jamals in particular – our minds will cling to whatever fragments of information we’ve managed to come across during the course of our lives. That includes information like frightening news headlines, tawdry music lyrics or unfair movie characterizations.

Taken together, these stereotypes create what social scientists call our unconscious biases. And it may explain why Lakisha doesn’t get the job over Emily. It might also help us understand why a cop is overly aggressive with black and brown suspects.

The point, then, is that the debate over racist thinking is not a problem solved by a protestor’s knee. Instead, it goes to the core of how humans are built to behave. But that critical nuance is lost on protestors like Kaepernick. For them, it’s all black and white.

Actually, it’s all black vs. white.

And that’s the real tragedy in all of this. Protestors have the opportunity to elevate the conversation about race by talking about stereotypes, biases and how we all might challenge ourselves.

For instance, they could have encouraged us to pay close attention to when we experience the emotion of surprise. That’s the mind’s way of telling us that a bias is being challenged with new information.

A great example is when Fryer found himself surprised by his findings. That would have been an opportunity for him to ask himself, Black Lives Matter and Kaepernick why they were drawn to the false narrative of killer cops.

But that’s not how people like Kaepernick think. Rather than help move the country towards racial harmony, they are stuck in their own fact-free worlds of renegade cops and evil white people. America’s racial agitators choose political agendas over progress.

The bottom line is that sports stars would do well to get off their knees and lead a constructive conversation on race. If they can’t do that, maybe they should just stick to playing sports.

And for those joining the protests because of their opposition to President Trump – including former Democratic Congresswoman Donna Edwards – be warned. Disrespecting the flag and our country is a politically dangerous proposition, especially when the facts don’t support the outrage.

Voters have long memories. Attack ads make sure of it.