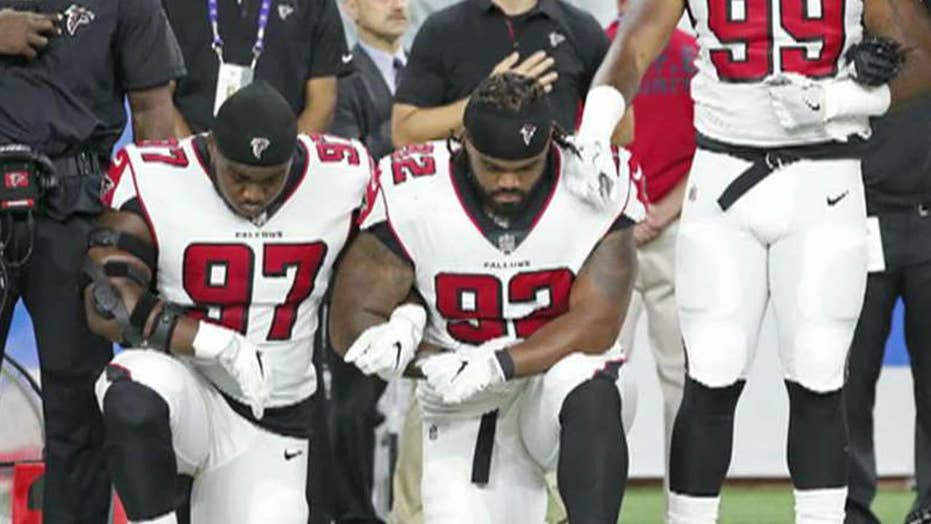 NFL owners seem poised to donate nearly $100 million (including some contributions from players) over seven years to support the favorite social justice causes of the players. But in a perfect show of how incompetent they are, the owners will get nothing from the players in return. No promise to stop disrespecting the national anthem or any other meaningful concessions.

Who taught these clowns to negotiate, Neville Chamberlain? Obviously, they are used to trying to buy their way out of problems. Can you even imagine the sum total spent bailing their pampered players out of legal beefs, domestic violence and sexual misconduct issues? It would likely dwarf even Congress and Hollywood. But do they really think this will solve their problem?

Now the owners have taught the players that disrupting the business that feeds them all will bring the players more satchels of cash to toss around to pet causes, in a frenzy of virtue signaling.

I will go out on a limb and bet this has the complete opposite effect and the players will go back to the well constantly for more Dane-geld. Dane-geld is the money that used to be paid to Viking marauders long ago to stop them from attacking your country. But as Rudyard Kipling pointed out in a poem:

So the NFL owners look like they will cave in and hope, hopelessly, that this will buy them some good will. Sadly, it will simply embolden the modern-day Vikings and Raiders and Buccaneers to continue their blackmail, lest the looting of TV ratings commence again.

“That if once you have paid him the Dane-geld

You never get rid of the Dane.”

So the NFL owners look like they will cave in and hope, hopelessly, that this will buy them some good will. Sadly, it will simply embolden the modern-day Vikings and Raiders and Buccaneers to continue their blackmail, lest the looting of TV ratings commence again.

What the owners should have done is said quite simply and emphatically: “Stand for the anthem or sit for the game – period.”

There would almost certainly have been a revolt if players got an ultimatum like that, and some of these ill-mannered millionaires would have continued to kneel or sit as “The Star-Spangled Banner” was played.

So what? Let them sit out the game, and play their back ups. Most of these guys are too over-leveraged spending their newfound wealth to miss too many paychecks.

Even if you had to miss a week of football, you would not be giving away control of the league to a collection of grievance mongers. Better to have one fight on principle standing up for the national anthem and flag both literally and figuratively, then to set yourself up for a series of cringing capitulations week after week and year after year.

The victorious players will now see their ability to extract funds for any cause, even their own enrichment, to be greatly enhanced.

The league has plenty of problems, including the massive liability caused by years of ignoring the damage done to player’s brains. Maybe they don’t think they have the standing to stand on principle right now. But by kneeling themselves, the owners have simply ensured that they will feed a social justice crowd that knows no compromise.

They would have been much better off to read to the end of that Kipling poem on Dane-geld and do the hard thing now:

No matter how trifling the cost;

For the end of that game is oppression and shame,

And the nation that pays it is lost!"

There are only a few perks that go with being a Green Bay Packer stockholder, but one is voting each year for the board of directors of the team. If the owners pay this bribe without securing an enforceable agreement that the players will not disrespect the national anthem and flag, then I will lead a stockholders revolt and run for the Packers Board on a promise to do just that.

These wannabe social justice warriors have plenty of their own cash and plenty of time outside the playing of “The Star-Spangled Banner” to pursue whatever causes they wish.

Americans should not stand for their disrespect, and I sure won't.