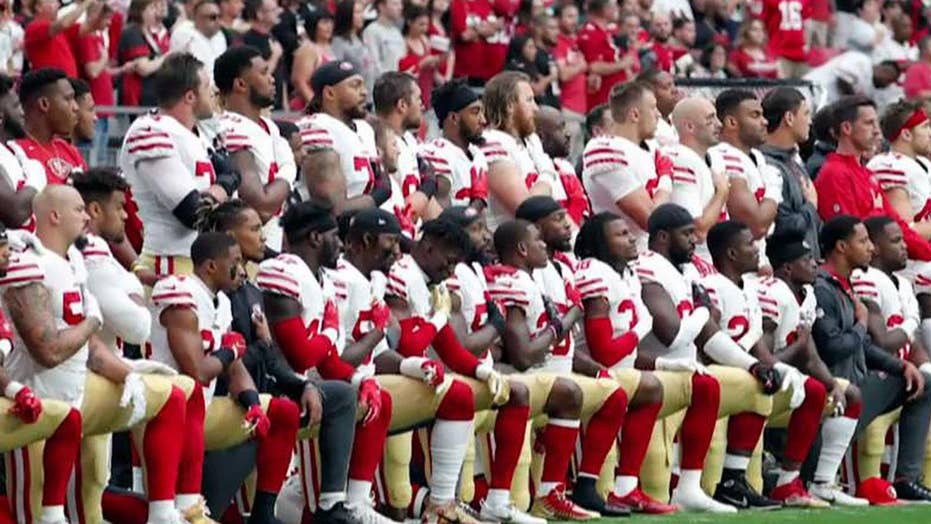 When my father-in-law (or “father-in-love” as I affectionately refer to Dan Reeves) was playing and coaching in the NFL, you’d never fail to see him standing for “The Star Spangled Banner.”

Twenty years before "Poppy" entered the League with Tom Landry and the Dallas Cowboys, the national anthem became an integral part of professional football.

Days after Japan surrendered in 1945 and brought an end to World War II, then NFL commissioner Elmer Layden called for “The Star Spangled Banner” to be played at all National Football League games.

He believed it “should be as much a part of every game as the kick off” and that “we should never forget what it stands for.”

The idea of the ball field serving as a place for all Americans to honor our country’s warriors and to stand in a display of solidarity is powerful. It’s something I’m glad Layden put in place and something I’m proud to adopt.

Growing up, my parents made sure I stood with my hand over my heart when our National Anthem played at a sporting event.

“Remember that the hearts of many Americans no longer beat because they died fighting for the freedoms you enjoy,” they’d say – a thought particularly compelling because Daddy’s life had been narrowly spared in combat by the heroic actions of an African- American Marine, Pfc. Ralph Johnson.

Daddy gave his own left eye and arm in Vietnam, and in his time there he gained a deep appreciation for the sacrifice of others that he worked hard to instill in his children.

To this day, when I watch a game with him, I can sense his wandering back to his high school and college days on the field when he had two eyes to set on his target and two hands to line up his throw.

In part because of what I was taught in childhood and also because of my love of country and football itself, I feel such pride as athletes, coaches, and fans all stand as one during the anthem preceding a game.

The respect and appreciation on display in those moments is a reminder of our common brotherhood as Americans. It makes me feel connected with everyone present – no matter which team colors they display.

I’m all for free speech and peaceable protest. Though I disagree with the desecration of the Stars and Stripes, it was witnessing someone burn the American flag during a Vietnam protest on a college campus that drove my dad right into volunteering as a recon Marine.

His experiences with the military enabled him to encourage thousands of returning soldiers and their families. But as a football fan, mother, and patriot, I’m saddened that the field is no longer a place where we, as a nation, collectively rise at the sound of our anthem.

We should rise – not because we agree on everything (after all, you and I may even be cheering for opposing sides) –  but because we appreciate the hard won right to have individual ideals and to assemble in peace.

We, as Americans, are a team. We are a wonderfully diverse team, and one that can work toward common good. While we certainly do not all share the same beliefs, we are united in the unequivocal right to hold them.

There is a time for freedom of expression. There is a time for debate. But there is also a time to put individual desires and frustrations aside and to come together. To be thankful for what’s right about our country. To show our children that all of us – despite our differences – are Americans.

February 2, 2002, marked Super Bowl XXXVI; it was the first one since our country was attacked on 9/11. That night the New England Patriots surprised thousands of fans by beating the favored St. Louis Rams.

It was the first Super Bowl victory for New England, but it made history for another reason as well. Previously, the Super Bowl was the only game of the year when each team’s individual starters – both offense and defense – were introduced.

This gave each player a moment in the spotlight at one of the world’s most watched events. But Coach Bill Belichick wanted his New England Patriots to think of themselves as a team, not a group of individual performers. And before the game, he informed the NFL officials that he and his players would forego the individual recognition and enter the field under one banner.

They were introduced this way: “Ladies and gentlemen, the New England Patriots.” Some say that choice won the game before it began.

Rising in respect for “The Star Spangled Banner” unifies us, regardless of whether we are Panthers, Bears, Jaguars, Giants, Broncos, Redskins, Cowboys, 49ers, or Falcons. And, I believe, like the triumphant patriots before us, we will find victory if we are willing to put aside our individual differences and respectfully come together as fellow American teammates.

Tara McClary Reeves is a cheerleader for veterans and active duty service men and women and is the author of “Is Your Dad a Pirate?” a children’s book that spotlights the service, sacrifice, and commitment of military families. Find her on Facebook at Tara McClary Reeves.