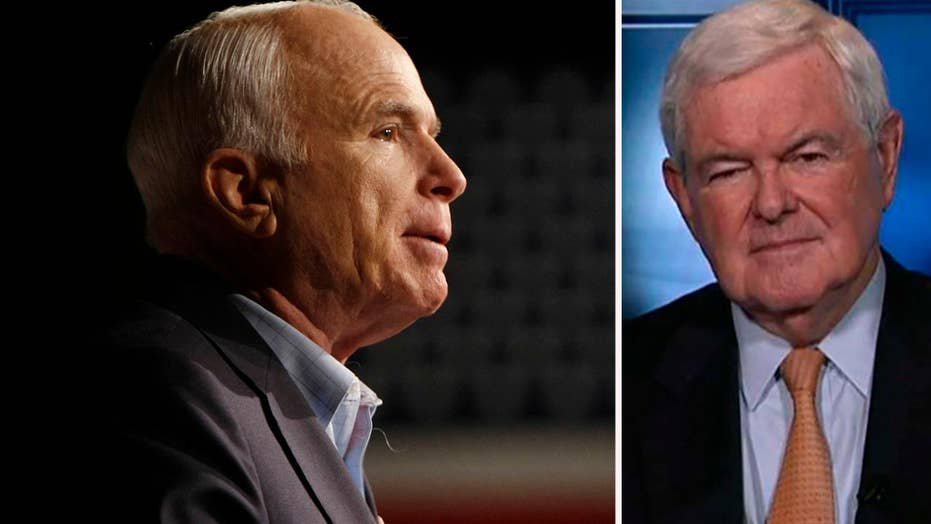 Newt Gingrich: Why John McCain was such an inspiration to me

When Callista and I first heard the news that Sen. John McCain had died, we were deeply saddened for his family. We are especially close to his daughter, Meghan, and had watched her devote endless hours in Arizona being with her dad as he fought the same terrible brain malignancy that had taken the life of Sen. Ted Kennedy.

McCain actually died on the ninth anniversary of Kennedy passing away. Our thoughts and prayers go out to Meghan, her mother Cindy and their entire family.

John McCain’s death is an appropriate time to think about this extraordinary man and his life.

I had been shaped in my view of McCain by my good friend, retired Air Force Gen. Chuck Boyd. Boyd had been a prisoner of war in Vietnam for nearly seven years (1966-1973) and is the only POW from the Vietnam War to achieve four-star rank. He respected John McCain from the bottom of his heart. He felt that McCain had shown courage and loyalty both to America and to his fellow POWs.

John McCain was always pushing the margins, looking for new ideas and trying to find better ways to do things.

By the time McCain won a House seat in 1982 he was already a significant figure. He had become a close friend to both President Ronald and Nancy Reagan. He had been a remarkably effective congressional liaison for the Navy, often pushing a buildup in opposition to the Carter administration for which he was supposedly working.

When John came to the House he was well known, energetic, enthusiastic and very personable. Both Democrats and Republicans liked him. He was also opinionated, argumentative and enthusiastically prepared to stand up for his beliefs.

One of my most personal encounters with John was in 1986 when I was in a very intense fight with the House Democratic leadership. Two physically large House Democrats came over and said they were sick and tired of what I was doing and I ought to know there would be a payback. One of them said “we are coming for you.”

For 81 years John McCain loved his country, lived his life as a patriot, and accepted hardships that few Americans have had to endure.

I had not realized that McCain had calmly come over to stand next to me. When the Democrat sounded threatening, John instinctively stepped closer to me and said “when you come for Newt, come for me too, the name’s McCain.”

I almost had the feeling I was seeing the kind of instinctive protectiveness McCain had developed for fellow Americans in the North Vietnamese prison camp where he was imprisoned and tortured for five years.

McCain’s greatest passion was for defending America. He spent endless hours trying to strengthen our military and to develop and implement effective strategies for national security.

When McCain became chairman of the Senate Armed Services Committee he asked me to join a small group that included retired Gen. Jim Mattis to discuss strategic planning for defense.

John was always pushing the margins, looking for new ideas and trying to find better ways to do things.

The Arizona senator was a maverick in the Republican Party, in his approach to being a senator, and in his relationship with presidents. This was good for America. We need a few more mavericks, not a few more conformists.

McCain understood that the Constitution was designed to have a strong Senate that could stand up to the executive branch. In a series of policy fights he was prepared again and again to use his senatorial powers to take on the bureaucracy and the president.

For 81 years John McCain loved his country, lived his life as a patriot, and accepted hardships that few Americans have had to endure.

The depth and intensity of McCain’s patriotism, his love for America, and his deep commitment to our nation remaining a free country are an inspiration to every American.

His is a life worth studying and praising.