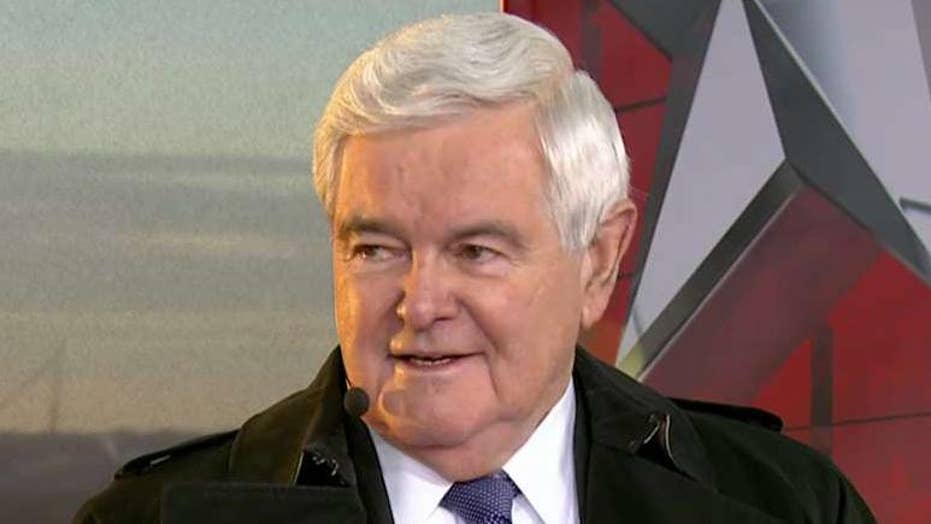 Newt Gingrich: Trump needs to stay on message after SOTU

Fox News contributor on what's next after the 'successful' speech.

Watching and listening to President Trump’s first State of the Union address Tuesday night, I was struck by how wide-ranging and visionary it was. I was also struck by how deeply the Democrats reject everything uttered by President Trump – even when it is something they believe in and support.

The president’s guests were emotionally powerful as examples of his values and the values in which most Americans believe. The synergistic impact of their personal stories being tied into the larger principles of the speech was inspiring. They were not only emotional guests. They were didactic guests, whose stories taught us something about ourselves and the values that have made America both unique and great.

Beyond these moving personal stories, this speech was a powerful collection of reform proposals that outlined a vision for a successful America which, as the president said, has to involve success for all Americans. His theme of making America great again for all Americans is one of the keys to what makes President Trump is so different.

It was a very inclusive speech, and its very inclusiveness seemed to leave the Democratic leaders unnerved. The more President Trump spoke about achieving positive, bipartisan goals, the more uncomfortable and unhappy House Minority Leader Nancy Pelosi, D-Calif., appeared. Her reaction to this forward-looking speech reminds us why she should not be speaker of the House again.

The contrast between the Trumpian optimism and the Democrats’ gloom and doom was reinforced by Rep. Joe Kennedy III, D-Mass., in his speech responding to the president.

The gap between good news and unhappy Democrats made me feel like I was reliving the Reagan years.

At a time of rising stock markets, record-low unemployment, companies announcing bonuses and investments, and the highest consumer confidence in a generation, Kennedy described the left’s version of our country, which most Americans would find unrecognizable.

The gap between good news and unhappy Democrats made me feel like I was reliving the Reagan years.

One of the strangest moments of the evening came after President Trump reported that black and Hispanic unemployment were at historic low points. Black and Hispanic Democratic members simply could not bring themselves to applaud something they had demanded for generations and that clearly meant better lives for their communities.

The depth of Democratic divisiveness and hostility was demonstrated again when President Trump offered a path to citizenship for three times as many Dreamers as President Obama had offered. Democrats simply couldn’t bring themselves to accept this victory for Dreamers, solely because it was President Trump’s proposal.

Actually, President Trump’s assertion that “Americans are dreamers too” reframed this entire debate from a focus on a small number of people here illegally to include all 327 million Americans. It may have been his best line of the evening.

President Trump evolved from “Trump the Fighter” to “Trump the Winner” in this speech.

The president’s policies are clearly beginning to work. Regulations have been rolled back more than ever before in our history. The tax cuts have had a shockingly big effect in their first 30 days. I have never seen American businesses react so aggressively with new investment plans, new bonuses, new pay scales and new hires.

The sheer day-after-day reporting on the positive response to the tax cuts is beginning to break through the elite media’s efforts to smear and distort them.

We have had a year of President Trump learning to be more and more effective, and this learning process showed itself Tuesday in both his style and tone.

Historians will look at President Trump’s successful, positive speech in Davos, Switzerland, last Friday and this speech four days later as the emergence of a national and world leader of the highest order.

There were an extraordinary number of specific reform proposals in the State of the Union address. Many of them are so practical that Democrats will be forced to work on a bipartisan basis.

How many Democrats want to be against $1.5 trillion-worth of infrastructure investment, combined with reforms to get things built quickly?

How many Democrats want to oppose lowering the costs of prescription drugs?

How many Democrats want to vote against fighting the opioid crisis?

How many Democrats want to oppose allowing people with fatal illnesses the right to try new drugs and new techniques?

How many Democrats want to oppose better vocational education to improve the work force and raise Americans out of poverty?

With this speech, President Trump set the stage for a series of bipartisan reforms, despite the Democrats’ hostility.

This is quite an achievement.