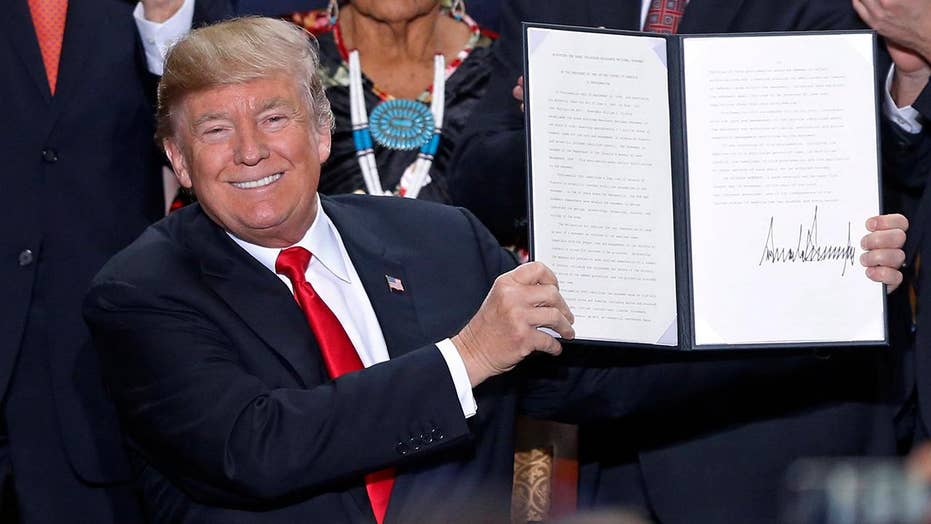 The president announced that he's decreasing the size of the Bears Ears National Monument and the Grand Staircase Monument in Utah; Dan Springer tells us why on 'Special Report.'

Once again, President Trump is taking a reasonable action to correct enormous overreach from previous administrations, and once again, the media and the left are going berserk.

The Trump administration's decision this week to reduce the size of the Bears Ears and Grand Staircase-Escalante national monuments in Utah was neither unique nor even out of the ordinary.

Similar actions have been taken at various federal monument sites nearly 20 times before by presidents such as John F. Kennedy, Woodrow Wilson, and Dwight D. Eisenhower. Yet, there are already lawsuits filed seeking to halt the president’s actions, and the media is gleefully repeating erroneous allegations that the administration may have done something illegal.

As a historian and a life-long conservationist, I spent much of my career working to protect our nation’s history and important sites – as well as our natural resources. My concern for the health of our planet and environment led me to co-author "A Contract with The Earth" with Terry L. Maple.

So, allow me to set something straight: Despite what the administration’s critics might say, redefining the boundaries of these monuments will not harm the environment, open the flood gates for dangerous mining or natural resource exploitation, or endanger Native American artifacts or historic locations.

The land around the monuments will continue to be federally protected and managed by one of our several highly-qualified federal land management agencies – which are the same agencies that manage national monuments. These surrounding public lands will be reclassified and will become national forests, wilderness areas, or other federally-controlled, cherished natural sites.

Here’s the difference: The regulatory regime for a national monument is focused entirely around protecting specific objects, so federal regulators have more control over what activities can and cannot happen on the designated land. A regulator, for example, could decide to prohibit activities which would otherwise be allowed in a federal wilderness area or forest.

This reclassification may change which federal agency manages a particular portion of the surrounding land, but the notion that land around these national monuments will somehow be endangered because it might be managed by the Bureau of Land Management instead of the National Park Service, or by U.S. Fish and Wildlife instead of the U.S. Forest Service is simply absurd. What the changes mean is that the people of Utah will have increased access to the land for grazing cattle, hunting, fishing, harvesting timber, and other traditional uses.

In fact, both of these monuments were designated by politically motivated presidents who were looking to overrule officials from a largely Republican-led state. In 2016, despite opposition from local and federal public officials who actually live in Utah, Obama designated nearly 1.35 million acres of land in the state to create Bears Ears National Monument. The designation just happened to mirror legislation that had previously failed in Congress.

Similarly, Bill Clinton, who was looking for a re-election in 1996, designated Grand Staircase-Escalante National Monument against the wishes of the entire Utah congressional delegation.

Obama and Clinton both also completely ignored parts of the Antiquities Act of 1906 (the law that provides presidents with the authority to designate national monuments) when they made these designations.

The act stipulates the designated land must be “confined to the smallest area compatible with proper care and management of the objects to be protected.”

Bears Ears is named for two buttes which rise out of the ground in Southern Utah. They are beautiful and historically significant to many Native Americans in the area. However, it is unlikely that they require 1.35 million acres – an area slightly larger than the State of Delaware (1.25 million acres) – to be properly managed and protected.

President Trump, along with Secretary of the Interior Ryan Zinke, are well within the law – and are, in fact, working to correct past illegal behavior which deprived the people of Utah any say over how land in their state could be used.