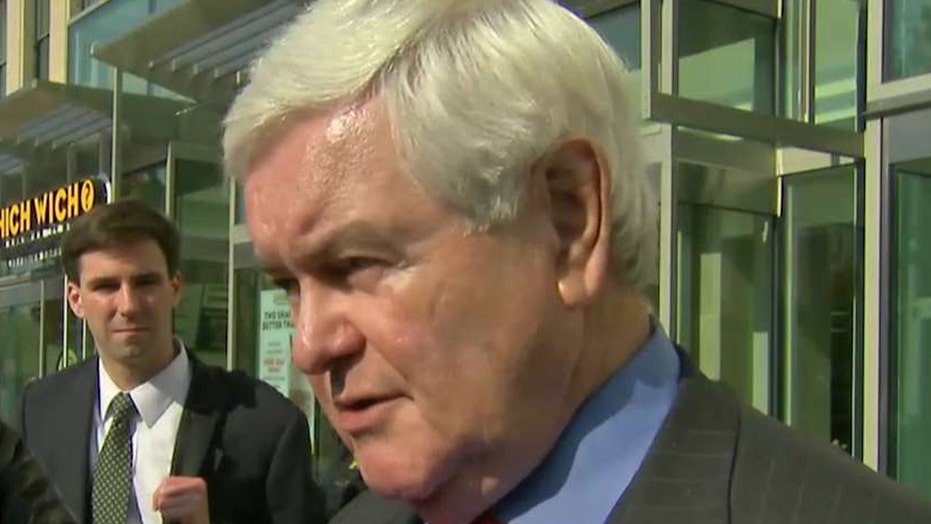 Gingrich on role in Trump transition, reports of turmoil

Former speaker of the House weighs in on 'Happening Now'

On Sunday, the publisher and the executive editor of the New York Times published a letter to the paper’s readers, promising to “rededicate” the paper to its “fundamental mission”. That mission, they said, is to “report America and the world honestly, without fear or favor, striving always to understand and reflect all political perspectives and life experiences in the stories that we bring to you.”

This is as close as the Times is likely to come to apologizing to its readers for a year and a half of unbalanced--and often unhinged--coverage of the presidential race.

SEAN HANNITY: TRUMP MUST IGNORE THE MEDIA AND TRUST HIS GUT

I grew up in an era when the New York Times was the greatest newspaper in the world. Throughout my political career, there were plenty of moments when I thought the paper’s coverage had an unfair slant. But I knew it remained America’s most revered newspaper, and that generally its reporters held themselves to the highest standards.

It was sad to see a 165-year-old paper destroy its credibility over one election season. But the Times’s complete abandonment of its old standards was obvious to anyone who read its coverage.

Thus I watched with some regret as all of that went out the window this election cycle. It was sad to see a 165-year-old paper destroy its credibility over one election season. But the Times’s complete abandonment of its old standards was obvious to anyone who read its coverage.

The paper wrote stories that were unrelentingly hostile to Trump and his supporters.

It allowed reporters to include their personal opinions and political analysis in news coverage.

It allowed political reporters to spew their animosity to Trump on social media. (I am old enough to remember when reporters maintained the conceit that they did not have political opinions.)

It published stories about Trump in which it distorted the accounts of interviewees, according to the subjects’ own testimony.

It published front page stories and editorials with headlines that accused Trump of “lying”--but never so characterized any of Hillary Clinton’s well-documented lies.

And now the same publisher and the same editor that oversaw this partisan assault are promising to “rededicate” themselves to reporting “honestly”. Perhaps even the paper’s liberal readership has tired of reporting that increasingly resembles the state-controlled propaganda of totalitarian regimes.

Before readers take the paper at its word, they should ask its leadership some of the following questions:

1. Does the Times have any reporters, editors, or columnists who will say they voted for Trump, and has it hired any new ones?

2. Has it hired any reporters who are even Republicans?

3. Has it changed its policies that allowed journalists to express their opinions about the events and people they covered in their news stories?

4. Will it ask the Pulitzer Prize board to withdraw, and its reporters to return, any prizes that might be awarded for news stories that contained reporters’ personal opinions?

5. Have its editors retracted misleading news headlines that expressed opinions or pure speculation--such as the paper’s coverage of Trump’s tax returns?

6. Has it fired reporters who admitted to writing politically motivated “news” stories and encouraged interview subjects to talk to them so they could stop Trump?

7.  Has it retracted its shameful election-eve front-page story “reporting” on Trump’s innermost thoughts and feelings, virtually every sentence of which is filled with reporters’ opinions and speculations--featuring claims like “he is struggling to suppress his bottomless need for attention”?

If the answer to all of these questions is “no”--why would anyone believe that the paper is now “rededicated” to honesty? And why would anyone trust the New York Times to report on American politics?