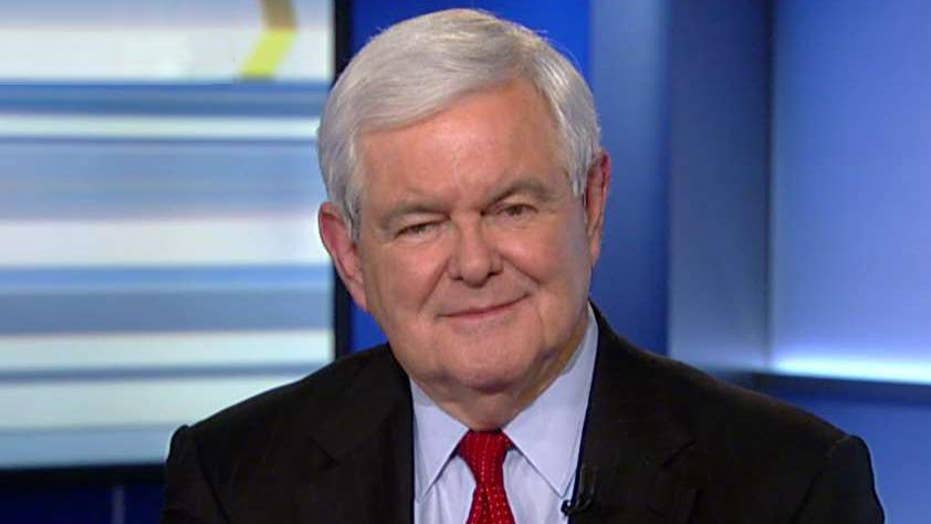 Newt Gingrich on GOP gaining momentum ahead of midterms

Once-dire polls now point to Republican leads; reaction from former Speaker of the House Newt Gingrich on 'The Ingraham Angle.'

Despite the Democratic hopes for a “blue wave” to give them majorities in Congress, there is good reason to be optimistic about Republican chances in the midterm elections in November – and the 2020 elections as well.

I think Republicans stand to gain four to six seats in the Senate. While we may lose some seats in the House, we will still keep control. I think we could potentially do even better – and there are plenty of reasons to support this belief.

Every Republican candidate should pay attention to – and be very encouraged by – the recent Reuters poll that found Republicans leading the 2018 generic ballot.

According to Reuters, 39 percent of registered voters, when asked last week, reported that they would vote for Republicans in November. This is compared to 36.7 percent who said they would support Democrats. This more than 2-point lead is significant when you consider that in early April Democrats were leading by more than 10 points. A swing of 12 points is a big deal.

I have no doubt the Republican surge is happening because the left-wing media is finding it harder and harder to ignore the positive outcomes of the Trump administration’s policies.

As I point out in my new book – “Trump’s America: The Truth About Our Nation’s Great Comeback” – under President Trump we have seen ISIS effectively destroyed, the biggest tax cut in 31 years, the lowest unemployment rate in 17 years (including the lowest black unemployment rate ever recorded), and one of the healthiest and most robust stock markets in decades.

Furthermore, on May 21 Gallup reported that Americans’ optimism about the ability to find good jobs is at a record high. According to Gallup: “67 percent of Americans believe that now is a good time to find a quality job in the U.S., the highest percentage in 17 years of Gallup polling. Optimism about the availability of good jobs has grown by 25 percentage points since Donald Trump was elected president.”

This finding, combined with the dividends from more than a year of Republican leadership, totally validate the Trump administration’s economic policies and totally repudiate the arguments of the so-called experts and left-wing politicians and pundits who have spent the last 17 months misleading the American people about how the economy works.

(By the way, the Federal Reserve Bank of Atlanta is estimating 4.1 percent economic growth for the second quarter of 2018. In 2016, these same experts said this was nearly impossible).

The fact is, when you combine the massive Trump-Republican deregulation effort, the tax cuts, and a Republican agenda that is being fueled and guided by innovation, America’s future looks very bright. By virtually every major metric, America is becoming great again – and Americans are starting to feel it.

However, as I also discuss in “Trump’s America,” the comeback is not guaranteed. Republicans – officials and citizens alike – must realize that we are in a real fight. It is a political-cultural civil war.

The forces on the left are bitterly opposed to President Trump and those who support him, because the left genuinely wants to change this country into something other than America. They see their supposed blue wave collapsing, and they will not go down quietly.

This is not a fight that will end in a compromise. One side will win and one side will lose. Republicans must not get complacent or allow their enthusiasm or energy to falter.

Every time Republican candidates are asked by the media about the supposed blue wave, they should push back. They should point out every way that Republicans have made – and will continue to make – life better for all Americans.

The left will continue to try to wage niche social fights fueled by identity politics and zany socialist principles. Let them.

Republicans must stay above the nonsense, fight the fights that matter, and keep delivering good outcomes for the American people. This is the only pathway to success in 2018 and beyond.