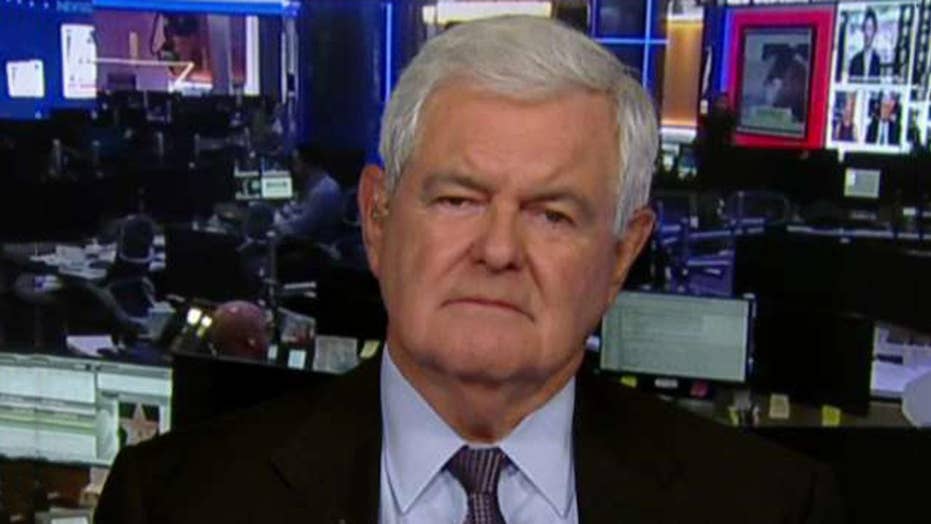 Gingrich: Do any Dems have the guts to vote for Kavanaugh?

America has witnessed an unbelievably savage and despicable effort by Democrats and their media allies to destroy Supreme Court nominee Judge Brett Kavanaugh through false and dishonest personal attacks.

Republicans on the Senate Judiciary Committee on Friday voted to send Kavanaugh’s nomination to the full Senate, and now the burden of proof should be on Democrats to show why he should not be confirmed.

Kavanaugh has clearly, unequivocally and convincingly denied all charges of sexual misconduct against him.

The New Yorker magazine’s smear against Kavanaugh was an absurdity. A woman could only remember a self-described drunken event, which supposedly took place over 30 years ago, after she spent six days in discussions with her attorney. Everyone connected with the alleged event repudiates her attack on Kavanaugh.

The claim by a client of anti-Trump lawyer Michael Avenatti that Kavanaugh was present at the scene of her alleged gang rape was beyond unbelievable. Classmates and high school friends of Kavanaugh simply repudiated her accusation as having zero credibility, and she provided zero evidence.

Another absurd attack on the judge came from a mother whose daughter promptly said nothing happened, and that her mother is simply wrong. The daughter goes on to affirm Kavanaugh’s decency as someone she briefly dated in the 1990s and remembers fondly.

Staff members working for Senate Judiciary Committee Chairman Chuck Grassley, R-Iowa, have received messages containing vicious threats – including that they deserve to be raped. Those messages, by the way, should be tracked down by the FBI and prosecuted.

If Kavanaugh can be defeated by this kind of manufactured and manipulated evidence-free process, then what reasonable conservative would ever put his or her name up for Senate confirmation?

The Kavanaugh family has also received death threats – which again, should be tracked down and prosecuted. Kavanaugh’s wife and two young daughters have had to endure vicious, humiliating, personal attacks on their husband and father.

Professor Christine Blasey Ford and her family have received death threats after being pulled into the Democrats’ scheme. These threats should, of course, be tracked down and prosecuted as well.

Ford has been manipulated by the Democrats, who hid her letter making uncorroborated accusations against Kavanaugh for over a month, dragged her into the national limelight, and urged her to avoid meeting with the Senate Republican staff members.

At one point Ford said she couldn’t meet because she was afraid to fly, although it was revealed at Thursday’s Judiciary Committee hearing that she has flown numerous times for vacations.

Ford was put through all of this even though she could not remember in what house the alleged gathering and assault on her took place, or when it occurred. At the same time, no one she said was present has corroborated her story.

Ford’s testimony was emotionally compelling. It is clear that something happened to her – but she knows as a professional psychologist that 36 years after an event, people can vividly remember things that didn’t actually happen.

If Kavanaugh can be defeated by this kind of manufactured and manipulated evidence-free process, then what reasonable conservative would ever put his or her name up for Senate confirmation?

Some people have said Kavanaugh should have been better vetted. How could he have been? He has undergone six separate, thorough FBI background checks for top positions throughout government. And all those investigations have turned up absolutely nothing that would disqualify him for high federal positions.

Further, Kavanaugh has stated under oath – under penalty of perjury – that he never did any of the things for which he is being attacked. He could not have known in advance how to defend himself against allegations dealing with things he never did. It’s impossible to plan for or anticipate last-minute character assassinations that are based on falsehoods and impossible-to-verify charges.

So the key to the next stage is not the Republicans.

The real question is: Are there any Democrats who are disgusted by this process of dishonest character assassination and manipulation? Are any upset that this is becoming their party’s operating pattern?

Are there any Democrats whose sense of decency forces them to vote “yes” for a decent man and brilliant jurist, whose entire public career has exemplified honesty, sincerity and patriotism?

Are there any Democrats who understand that a 36-year-old, unsupported allegation can’t possibly be the standard for blocking a U.S. Supreme Court nominee?

If no Democrat has the courage to vote for decency, honesty and a sense of fairness, then we are truly in deep trouble as a country.

The focus for the next few days ought to be on the Democrats.

Let us see what kind of a party they have become.