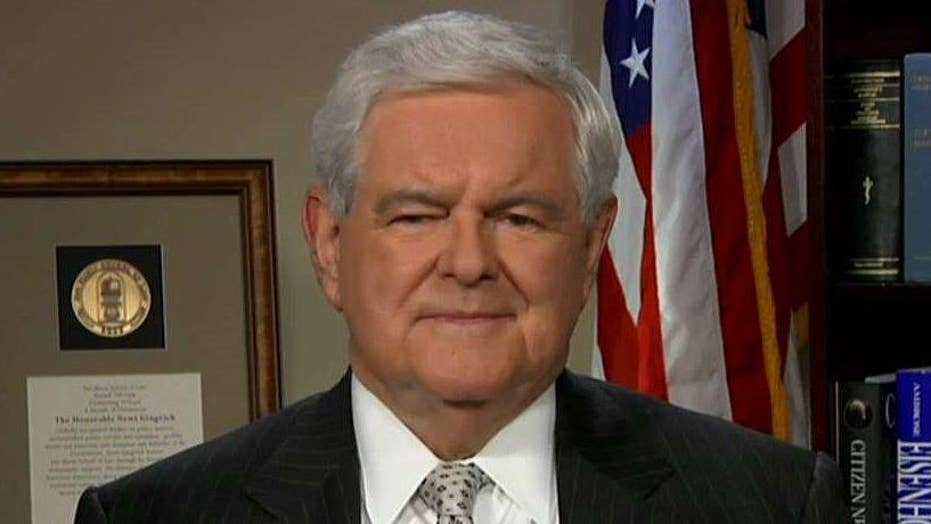 On 'Hannity,' the former House speaker says the president is telling Americans the truth and the elite media hate it

Americans have once again been subjected to a dishonest, one-sided elite media frenzy.

In what is becoming an all too common occurrence, the media covers an event, distorts it, and then builds on its own distortion, condemning anyone who refuses to blindly accept their falsehoods.

All of this is done in a tone of hysteria, designed to both distract us from the serious problems the Left can't solve and to isolate conservatives on emotionally hateful grounds.

Let me be clear: The conflict in Charlottesville last Saturday was terrible. An American was killed in an act of domestic terrorism by a hateful fanatic. Every American should condemn neo-Nazis, the KKK, and racism in all its hateful forms.

However, for leftwing fanatics and the elite media, bringing the country together and refusing to tolerate any group or individual that promotes racism and violence is not enough.

Instead, they believe that we should support eliminating large parts of American history.

If a person defends a historic monument or statue, the Left and the elite media immediately claim it is a sign of racism, anti-Semitism, and any other harsh emotional condemnation they can throw.

Never mind the words of former Secretary of State Condoleezza Rice, a Republican who was the first African American woman to serve as Secretary of State and who witnessed the atrocities of racism first-hand when members of the KKK bombed the 16th Street Baptist Church in Birmingham, Alabama in 1963, killing one of her close friends and three other young girls.

When asked earlier this year about removing Confederate memorials, Rice said, "When you start wiping out your history, sanitizing your history to make you feel better, it's a bad thing."

However, engaging in rational debates about this issue is impossible in this media frenzy because only the Left's views are tolerated.

During the opening monologue of his Fox News show, Carlson raised concern about discrediting every historical figure who was a slave owner, saying that in doing so, we risk undermining our founding documents. In response, Kristol tweeted, “They started by rationalizing Trump. They ended by rationalizing slavery.” Kristol then went on to infer that Carlson was anti-Semitic.

This is a perfect example of the current hysteria. Carlson was raising a valid question about whether it is reasonable to start whitewashing our history and denigrating every American historical figure who owned slaves. Do Kristol and others in the elite media think that we should tear down the monuments of George Washington and Thomas Jefferson, both of whom owned slaves?

The surprising thing about Kristol’s unexpected attack on Carlson was that Carlson had worked under Kristol for years at the Weekly Standard. According to Carlson, “I knew him well. He was a genuinely smart guy. He’s a good boss, too. He was humane and fair-minded. He was the kind of person I never would imagine would write something that nasty and dishonest about an enemy much less an old friend. What happened?”

But Kristol’s rash tweetstorm against Carlson is exactly the kind of impulsive reaction the frenzy produces.

However, the media will soon learn that the clear majority of Americans repudiate this kind of hysteria.

A recent poll conducted by NPR, PBS News Hour, and the Marist College Institute for Public Opinion indicated that 62 percent of voters nationally think monuments of Confederate leaders should remain up as historical symbols, while only 28 percent of those polled said they should be removed because they are offensive and 10 percent of people were unsure.

Commenting on the poll in his Lunchtime Politics newsletter, political analyst Ron Faucheux  went into further detail on the Marist poll, noting that 44% of Democrats, 86% of Republicans, and 61% of independents say the monuments should remain as historical symbols.  By region: 53% in the Northeast, 61% in the Midwest, 66% in the South, and 61% in the West say the statues should remain. Also, 67% of Caucasians, 44% of African Americans, and 65% of Latinos say the statues should remain.

So, in the Left's and elite media's view are 44 percent of African Americans secretly racist since they accept the historic role of old statues?

This is just further proof of the dishonest, hysteria-driven smear campaign being run by the Left and the elite media.

But don’t be fooled. The Left is not motivated by their desire to defend morality. Their actions are fueled by their desperation to focus our attention on symbolic emotional fights to detract from their failed policies.

The day after the tragedy in Charlottesville, six people were shot and killed in Chicago and five more have been killed since. In Baltimore, eight people have died of gunshot wounds in the past week. And on Thursday, at least 13 were killed and approximately 120 wounded in an ISIS terrorist attack in Barcelona, Spain.

The fanatics of the Left have no answers for these problems.

All they can do is attempt to arouse hysteria by focusing the debate on symbolic issues.

However, if the Left and the media continue their hysteria, fanaticism, and attacks on America, it could pose a serious threat to our nation and our future.

It is therefore time the rest of us defended America as aggressively as the Left attacks it.