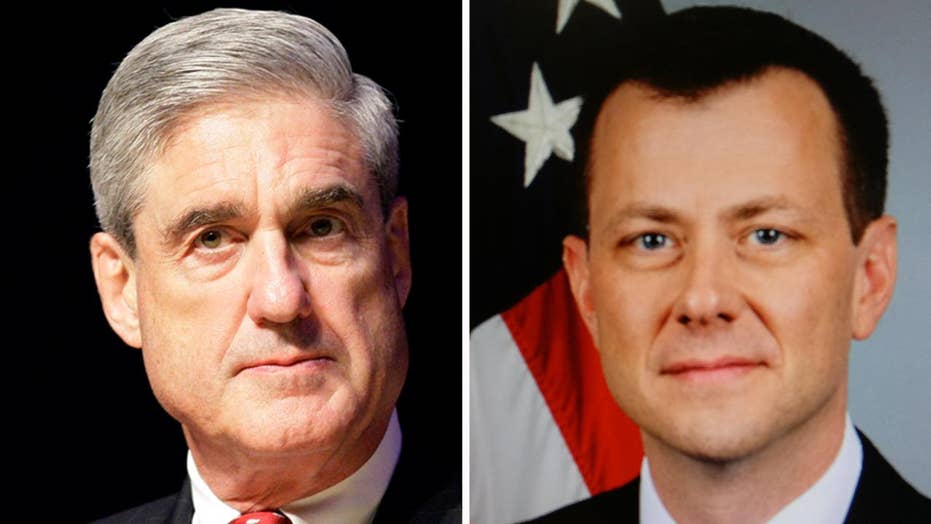 Catherine Herridge has more on the text exchange between Strzok and Page.

The Justice Department has no official policy to vet prosecutors for conflicts of interest or bias. Attorney General Jeff Sessions recently confirmed this policy gap to the House Judiciary Committee, stating that it is “the responsibility of the person involved in the investigation to ensure that nothing they do has a conflict of interest that requires a recusal.”

In other words, at the highest levels of our government’s prosecutorial system, the investigator is expected to self-report and ask to be removed from the case if he has a conflict of interest or bias. This outrageous failure would never be tolerated in the private sector.

Sessions, perhaps overcautiously, recused himself from any investigation of the 2016 presidential election. But the rest of Special Counsel Robert Mueller’s team has not followed suit to deal with conflicts or bias.

In fact, the Justice Department has supplied Mueller with biased investigators who have deeply entrenched, unchecked conflicts of interest. This is what happens when partisan investigators are given autonomy to influence investigations.

At the highest levels of our government’s prosecutorial system, the investigator is expected to self-report and ask to be removed from the case if he has a conflict of interest or bias. This outrageous failure would never be tolerated in the private sector.

Here is a rogues’ gallery of those assigned to investigate the 2016 election.

Rosenstein oversees Mueller’s investigation of the 2016 election. Rosenstein previously supervised an investigation into the approval by the Obama administration of a controversial sale of an American company now known as Uranium One to Russia. At the time Hillary Clinton was secretary of State.

Russia used bribery, kickbacks and extortion to influence the uranium deal. During negotiations, Bill Clinton was paid $500,000 to speak in Russia, and the chairman of Uranium One made a $2.35 million donation to the Clinton Foundation. Despite these glaring concerns, the FBI quietly ended the case in 2015.

Special Counsel Robert Mueller. He is a former FBI director and former partner at the law firm WilmerHale.

Mueller was FBI director during the uranium investigation. He stepped down and was replaced by James Comey in 2013, just as the investigation was concluding. After being dismissed by President Trump, Comey leaked government memos to influence the investigation. Comey may have violated the law, but he accomplished his goal of getting his mentor Mueller appointed special counsel by Rosenstein.

Strzok was demoted from the Mueller investigation for sending anti-Trump text messages and allegedly relied on the anti-Trump 'Dirty Dossier' created by Fusion GPS (paid for in part by the Clinton campaign) to begin an investigation into Russian election interference, including spying on Trump campaign associates. He was also in charge of the Clinton email investigation and declared her “careless” – not “negligent” – which was the basis of the decision not to prosecute.

McCabe was involved in both the FBI’s investigation of the uranium sale as well as the investigation in Hillary Clinton’s use of a private email server, neither of which resulted in negative outcomes for Clinton. The inspector general is now investigating allegations that McCabe should have recused himself, among other concerns, from the handling of the Clinton email controversy.

A few months before the Clinton investigation began, McCabe’s wife received over $675,000 from Democratic campaign committees, including Clinton loyalists, in her campaign for the Virginia state Senate.

Weissmann donates frequently to Democrats. He attended Hillary Clinton’s election night party, and praised then-Acting Attorney General Sally Yates, saying he was "so proud" of her for defying Trump. Weissmann is one of Mueller’s top deputies.

Zebley represented Justin Cooper, a key figure in the Hillary Clinton email controversy. Zebley is now on the Mueller team.

Just how disturbing is Zebely’s employment for Mueller’s witch hunt? Cooper admitted to two instances where he destroyed Hillary Clinton’s old mobile devices by breaking them in half or hitting them with a hammer.

Rhee represented ex-Obama Deputy National Security Adviser Ben Rhodes, the Clinton Foundation in a 2015 racketeering case, and Hillary Clinton herself in a lawsuit seeking access to her private emails. Rhee was hired by Mueller to serve on his witch hunt.

Almost every day, we hear of biases and conflicts among the Justice Department-Mueller team – with no end in sight. Investigators did not report their conflicts during the department’s investigation of Hillary Clinton. Mueller’s team continues to ignore its own conflicts of interest in a most unethical way.

Our justice system deserves a better outcome. We must clean up the Justice Department and institute an official process to vet our investigators.