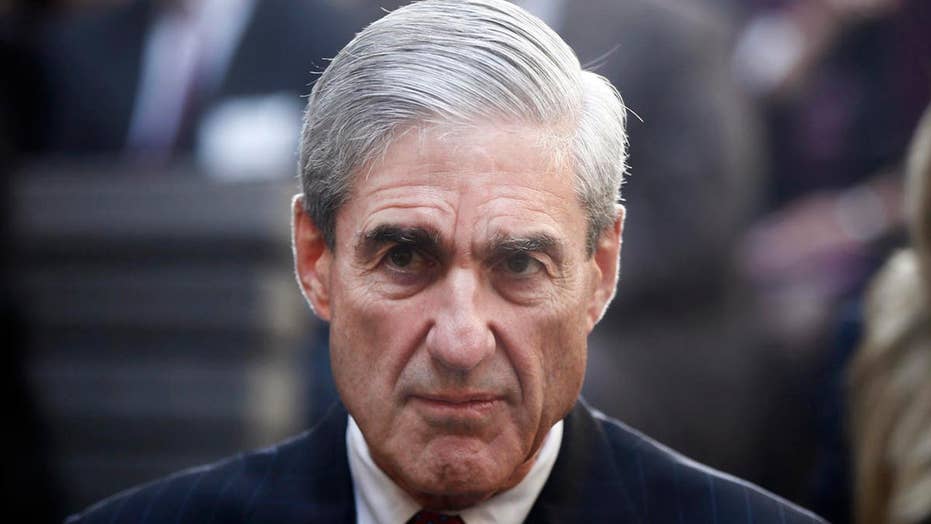 A few questions for Robert Mueller

The way the Special Counsel and his team have conducted the Russia investigation has raised a lot of questions. One former Clinton adviser wants to know whether he would answer a few. #Tucker

Most Americans are sick and tired of the leaky, slow-motion drama that Special Counsel Robert Mueller’s so-called “Russia collusion” investigation has become.

Mueller has mounted an all-out effort, funded by your tax dollars, to find something – anything – that he can use to accuse President Trump of illegal conduct. The goal is clear: getting the president either convicted on criminal charges (if such a thing is even possible for a president) or impeached and removed from office.

This may be as close to a coup as we’ve ever come in the United States. Unhappy with the 2016 election results – attributable to Americans who Hillary Clinton called a “basket of deplorables” – President Trump’s opponents are now arrayed against him and want him out of the Oval Office.

The precedent being set by these post-election machinations is constitutionally damaging, and genuinely deplorable. Investigations of future presidents by their political opponents, as a means to force them from office, may become the norm.

Then the judge opened up the throttle. "We don't want anyone in this country with unfettered power,” he said, and “it's unlikely you're going to persuade me the special prosecutor has power to do anything he or she wants," since "the American people feel pretty strongly that no one has unfettered power."

Let’s remember one thing: The American people elected Donald Trump because we wanted him to tackle the nation’s serious problems – not be forced to devote endless time to an investigation that’s more debacle than disclosure, waste than haste, and increasingly arrogant.

Whatever the original intent, the Mueller investigation has begun to consume people, eroding bonds that make us one. That is why it has to wrap up.

Now, on top of everything else, we face a constitutional crisis, as the Department of Justice challenges long-established congressional oversight authority.

To what end? To preserve a clutch of second-tier convictions? For that, Deputy Attorney General Rod Rosenstein is gambling America’s institutional trust and longstanding inter-branch relationships.

Members of Congress recently requested documents from Rosenstein, including the full “scope memo” explaining exactly what the Mueller probe was assigned to investigate. That’s a reasonable request, since there’s a great deal of confusion surrounding the Mueller investigation’s scope, duration, motives, authorities, personnel and selective focus.

Congress wants to understand – as do many Americans – whether Mueller’s wide-ranging investigation has gone beyond its scope, and when the investigation nightmare will end.

But Rosenstein refused to produce the scope memo without redactions, arguing that it pertains to an ongoing criminal investigation. This is a weak excuse, given the flood of recent leaks about the Mueller probe.

So Rosenstein is on shaky ground in telling Congress that it has no right to see what it needs to exercise oversight.

Rep. Mark Meadows, R-N.C., who is chairman of the House Freedom Caucus, said earlier this week: "Valid investigative requests from Congress have been slow-walked, stonewalled, and impeded at each step of the way under his (Rosenstein’s) watch."  That should not happen.

In response to Rosenstein’s refusal to produce key documents, some House members have prepared articles of impeachment against him as a last resort. They want accountability. They are right to want it.

Maybe Rosenstein just wants to be left alone – or to give Mueller more time for rummaging around for something on the president. Perhaps Rosenstein is allied with forces that want to avoid further congressional scrutiny.

Either way, Rosenstein said Tuesday: "I can tell you there are people who have been making threats privately and publicly against me for quite some time and I think they should understand by now: The Department of Justice is not going to be extorted."

Extorted? By members of Congress? Men and women elected by the American people to seek truth and assure accountability? What a curious, inapt and constitutionally disparaging reference by Rosenstein – a man trained in careful use of words like “extorted.”

Aiming to put himself in the right, Rosenstein added: "We’re going to do what is required by the rule of law and any kind of threats that anybody makes are not going to affect the way we do our job."

Someone needs to slow this train down, or turn the burner back to simmer. No personal threats are contained in congressional insistence that executive branch officials comply with constitutional oversight. That is what the law requires. Refusing to comply doesn’t uphold the law – it ignores the law.

In fact, the Justice Department has often been forced to disgorge documents to Congress that compromise cases. Whether Rosenstein likes it or not, that is the law. He is not exempt from legitimate congressional oversight, which can at times impinge on individual cases.

Constitutional oversight is paramount. In a head-to-head battle over what is produced, Congress always wins. Absent executive privilege, the deputy attorney general cannot bar Congress from the documents it seeks.

I was a principal counsel in the Waco investigation by Congress in 1995, which examined a disastrous siege by federal law enforcement officers against members of an armed religious cult in Waco, Texas. Some 86 people died – including four federal agents.

The committee I served compelled the FBI; Bureau of Alcohol, Tobacco and Firearms; Immigration and Naturalization Service; and Justice Department to provide us with hundreds of thousands of documents that later resulted in criminal referrals.

Like today, tricks were played by political actors at the Justice Department. Our committee was stiff-armed, slow-rolled and flayed in the media. Documents were over-redacted, under-produced, and dumped on the eve of hearings, hiding critical things in a massive pile of nothing important.

But we got them. Such shameless legal games, in that day, distressed average Americans. They still do. These antics do a disservice to the pursuit of truth, disaffect regular people, and create unnecessary suspicion and distrust around institutions that work on trust.

Complying with lawful congressional oversight is central to upholding rule of law in a democracy. Obstructing Congress should not be a policy for any department, especially not the Justice Department.

No wonder that President Trump tweeted, in response to Rosenstein’s obstruction: “A Rigged System - They don’t want to turn over Documents to Congress. What are they afraid of? Why so much redacting? Why such unequal ‘justice?’ At some point I will have no choice but to use the powers granted to the Presidency and get involved!”

President Trump would be within his rights to “get involved.” Ironically, presidents have been criticized in the past for not providing information to Congress. But no modern president has been harangued by the opposition party for saying a department should provide Congress with material sought pursuant to constitutional oversight.

Here’s the bottom line: Rosenstein has a responsibility – indeed, a duty – to give Congress the full “scope memo” explaining what Mueller is investigating and other information Congress needs to carry out its oversight responsibilities. America has a right to know.

And Mueller and his team have a responsibility to wrap up their investigation, so President Trump and his administration can get on with the important work he was elected to do.

At a certain point, words run out, and action is required.