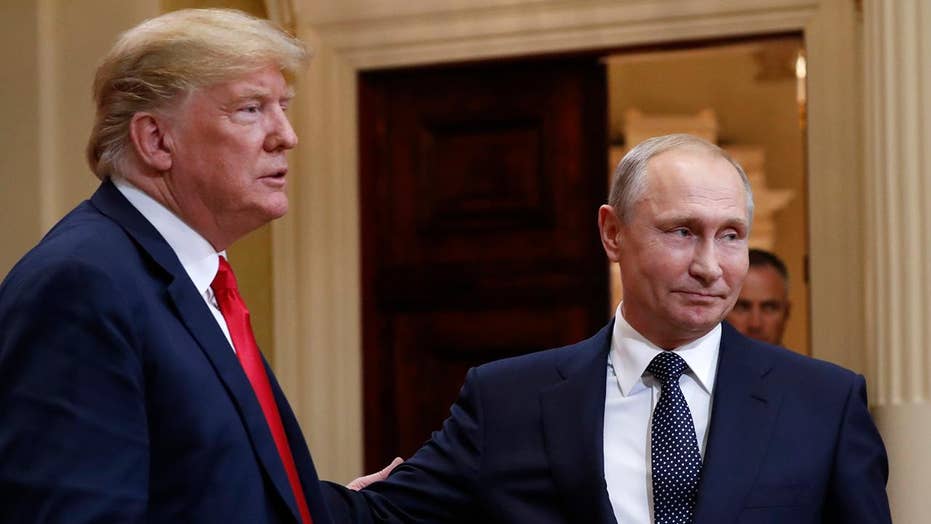 President Trump invites Putin for a US visit this fall

President Trump, who I voted for and support, is a strong and decisive leader – a man of action. He often approaches foreign relations and meetings with leaders of other nations like a boxer – standing alone, fighting hard for the best interests the United States. The events of the past few days involving his summit with Russian President Vladimir Putin show he’d be wise to start acting more like the quarterback of a great football team.

With his background as the head of a private company with a relatively small staff, President Trump is used to making deals one-one-one with other corporate executives. That worked for his business empire and made him a billionaire. But the responsibilities of the presidency are much broader, the decisions far more complex, and the number of issues any president has to deal with are enormous.

No president can possibly master the details of every issue he must deal with. That’s why – like a great quarterback – he has a team surrounding him. Just as no quarterback can take the field alone and win a football game, no president can handle his job – particularly the challenges of foreign policy and national security – by himself.

As a strong supporter of President Trump – and as someone who has served as an assistant secretary of state under Colin Powell and as a White House staffer under Presidents Ronald Reagan and George H.W. Bush – I want to give President Trump this helpful advice: rely on your outstanding team of Cabinet members and senior advisers. This is not a sign of weakness. It is a sign of strength.

Candidly, the president should not have met alone with Putin and only translators for about two hours at their summit in Finland on Monday. President Trump should have been accompanied by Secretary of State Mike Pompeo, National Security Adviser John Bolton, White House Chief of Staff John Kelly, Defense Secretary James Mattis, U.S. Ambassador to Russia Jon Huntsman, perhaps a handful of other officials, and a note-taker.

The president was wise to select this A-Team of senior officials – probably the most talented assembled since the Reagan presidency – to advise him and execute his policies. He needs to trust them and use them. But they can’t do their jobs if they’re not in the room when he meets with his foreign counterparts and if they’re not consulted on major decisions.

Embarrassingly, Director of National Intelligence Dan Coats was surprised to learn Thursday from NBC News reporter Andrea Mitchell – during a televised interview – that President Trump had invited Putin to visit the White House. And when Coats was asked what Presidents Trump and Putin discussed in their private meeting he responded: “I don’t know what happened in that meeting” – three days after the meeting was held.

The president should have consulted Coats, the senior officials mentioned above, and CIA Director Gina Haspel before extending his invitation to Putin. Similarly, he should consult with his team before making significant decisions dealing with North Korea, China, NATO nations and other nations around the globe.

Ultimately, of course, President Trump makes the final decisions – that’s as it should be. But he should take advantage of the brainpower and experience of his team. That’s why they’re there, to support him and help him succeed on behalf of our nation.

President Trump needs to take his star players out of the locker room, put them on the field, and take advantage of their experience and talents.

Together, the president’s A-Team has more than 300 years of experience in foreign policy, the military and national security positions. They are wise, honest and great patriots.

To cite just one example from my own personal experience: National Security Adviser John Bolton, with whom I worked at the State Department, is a tried-and-true thinker, drawing his advice from decades of intense study of foreign motivations, machinations, historical steps and missteps – especially dealing with the countries President Trump most needs to understand.

In addition to relying on his A-Team to attend meetings he holds with foreign leaders and to review big decision before he announces them in remarks or a tweet, the president should invite criticism internally. He needs to slow down enough to recognize that no human being can possibly know everything and be right 100 percent of the time.

International relations and national security should not be conducted like an exercise in public relations or a reality TV show. And while the president is understandably averse to endless pondering and delays in decision-making – something that plagued the Obama White House – he needs to accept that fact that sometimes snap decisions made without consulting experts can turn out to be the wrong decisions.

Here’s the bottom line: President Trump is a brilliant leader, and his slogan of Make America Great Again motivates everything he does. He has been unfairly dogged by a long, drawn-out investigation led by Special Counsel Robert Mueller that is harming our nation and that has produced no evidence that he has engaged in wrongdoing.

Millions of American voted for Donald Trump because they wanted the disruptive leadership he promised, with the goal of steering our nation in a new direction, after a dismal eight years under President Obama.

By trusting in his team President Trump can avert geopolitical landmines, unintended ambiguities and the consequences of loosely used words. He can avoid accidental missteps, mixed messages, misunderstandings and misfires. He should let his team out of the locker room and have them join him on the field and in the huddle.  With his full team fielded, he will run up the score.