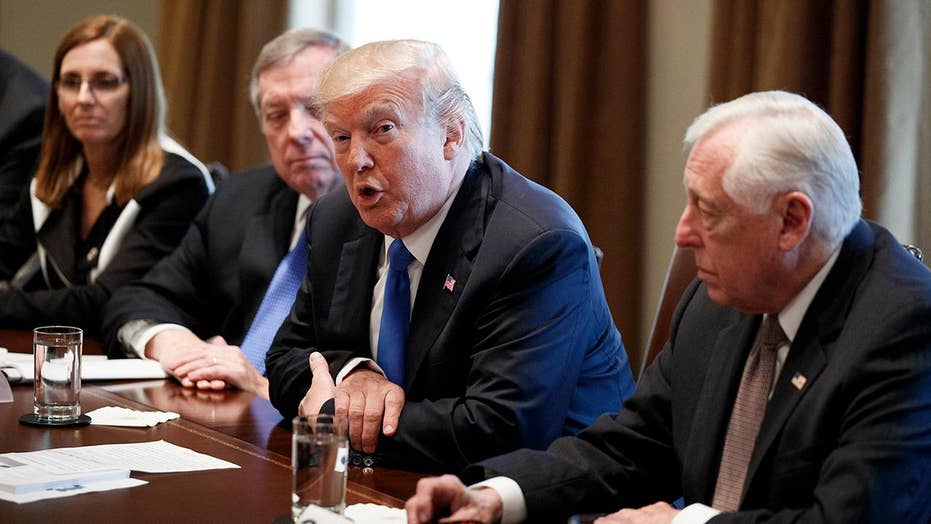 Trump challenges Dems to work with GOP on immigration reform

The president went into the televised meeting demanding security provisions, like a wall, an end to chain immigration and the visa lottery and more ICE agents in return for a DACA fix; John Roberts has the roundup for 'Special Report.'

The Deferred Action for Childhood Arrivals (DACA) program, which defers deportation for about 700,000 illegal immigrants brought to the U.S. as children, has been the topic of intense negotiations between President Trump and members of Congress this week. But this discussion is premature. Action to improve border security must come first.

The president wants to begin phasing out the existing DACA program in March – though a federal judge this week temporarily blocked ending the program while a lawsuit is pending. The Trump administration is challenging that order. But the possible end to the program in coming weeks has driven Democrats to seek legislation to change the law to allow DACA recipients to stay in America.

Our country is filled with generous people. Each year we let over 1 million people legally immigrate to our country. More come legally for school and work. But at the same time, hundreds of thousands enter our country illegally by crossing our southern border.

It has been a longtime problem that, once again, became a huge campaign issue in 2016 elections. Republicans, led by President Trump, recommitted to building a wall along our southern border to stem the tide of illegal border crossings with its attendant problems. Democrats promised to grant legal status to DACA recipients – and urged even broader changes to immigration laws leading to amnesty for the estimated 11 million illegal aliens in our country today.

We need to enforce our internal immigration laws and remove the incentives to enter and stay in America illegally. Only after all these things have been done should we start to debate further immigration reforms.

The American people elected Donald Trump as president and Republican majorities in the House and Senate. In keeping with the electoral outcome and the long-term health of America, we should not put the DACA cart before the build-a-wall horse.

Before Congress passes any legislation on DACA or a broader amnesty bill for those who are in the United States illegally, we must fund, start, and complete building of the border wall. Congress must also add additional infrastructure on the border to make sure it is as secure as possible.

We also need to enforce our internal immigration laws and remove the incentives to enter and stay in America illegally. Only after all these things have been done should we start to debate further immigration reforms.

In 1986, amnesty was granted to 3 million illegal aliens. We were promised secure borders, strong enforcement, and a host of other immigration reforms in exchange for what was billed as a one-time amnesty program. The amnesty was quickly given – but we have been waiting for more than 30 years for the other promises to be delivered.

If there is one thing I have learned in my brief time in D.C., it is to make sure the other party upholds its promises before giving up the leverage I hold. Somehow, the other side is never capable of fulfilling its end of the bargain.

Today DACA delays the appropriate legal action against people who are in America illegally.

DACA has a plethora of problems, and most recipients aren’t the valedictorians that the media would like the public to believe. Pro-DACA sources admit that more than 20 percent of self-described DACA recipients have already dropped out of school.

Insiders warn that there is a severe lack of vetting within the program. Further, a person receiving DACA benefits can be a criminal, committing up to two crimes without being disqualified, and can be up to age 36 when applying!

DACA distracts the public and fails to meet the objectives the American people expressed support for in the voting booth. Voters indicated the desire for a border wall or fence and other border security measures. That’s a big reason many Americans made Donald Trump president.

Moreover, permanent DACA status does not satisfy the DACA recipients I have talked to. Why? Because it is, ostensibly, only a benefit for these illegal aliens and is not citizenship.

Instead, DACA recipients want a pathway to citizenship – full amnesty – and all the benefits that come along with it for themselves, their parents (who brought them here illegally in the first place), and the entire group of people in the “chain migration” scheme – a long list of extended family members, their spouses and children.

As a result, the movement to provide a “fix” for DACA recipients has morphed into the passage of the clean DREAM Act – a plan to allow millions of illegal aliens to remain in the United States. DACA recipients have been dubbed Dreamers.

Even if Congress extends or makes permanent the DACA program, Democrats and Dreamers won’t rest until they achieve full amnesty with passage of the DREAM Act. They want illegal aliens to move ahead of the millions of people have been waiting to enter the country legally or who have been here legally for many years on temporary visas.

I can’t help but think of the many friends I have who have become naturalized American citizens. Most have taken 10 to 12 years. They did it the right way. Is it humane to reward people who broke the law over those who have waited years and followed all the rules?

Extending DACA or passing a larger amnesty bill before we build the promised border wall, before we take other actions to improve border security, before we beef up internal enforcement of our immigration laws, and before we remove the incentives to come and stay in America illegally would be a colossal mistake.

President Trump has said it would only take a year to complete the wall, though others estimate it would take longer. Let’s take that year or more of construction and complete the wall before we discuss DACA and immigration reforms. I will do all I can to keep the commitments to uphold the law that I made to my constituents on the immigration issue.