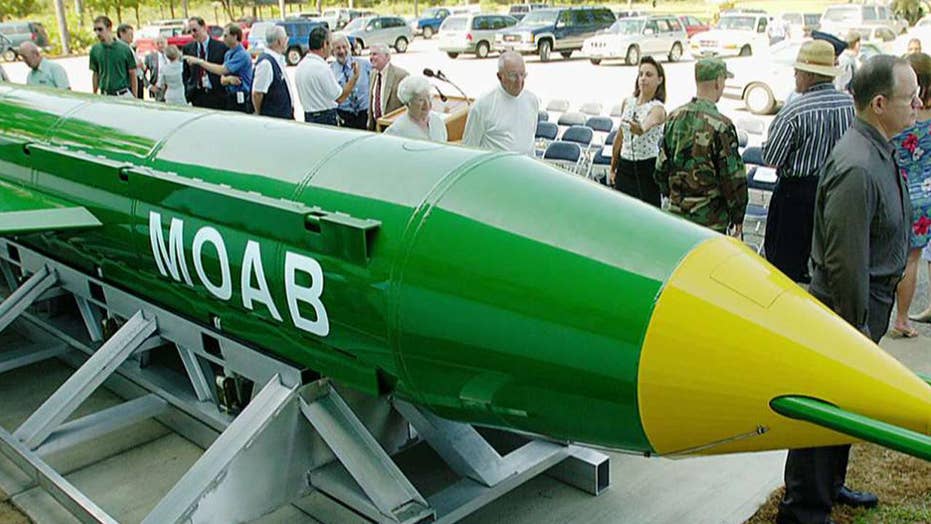 There’s been lots of breathless news coverage Thursday of the U.S. deciding to use the largest conventional bomb in its inventory to attack an ISIS tunnel complex in eastern Afghanistan.  Most of that interest is misplaced.  There is nothing particularly significant about the employment of the weapon slyly titled the MOAB (‘Mother of all bombs”).

It is not the conventional equivalent of the Hiroshima bomb, it releases only one-tenth of one percent of the destruction that bomb did, and with no radiological effects.

The president and Secretary of Defense had previously pushed down the chain of command responsibility for operational decisions of this nature.  That is a significant change from the Obama administration practice of holding such authorities at high political levels, but it has been in place for some time.

America’s military commander in Afghanistan, General Nicholson, gave the approval, so there is no reason to suspect higher headquarters like the Pentagon or White House were seeking to send a message to North Korea or Iran.

The review of Afghanistan policy is evidently still underway in the Trump administration, so this tactical choice wouldn’t be intended to signal a change in course. The ordnance itself is designed to destroy wide, shallow target sets, like tunnel complexes, so there is no reason to suspect North Korea or Iran would fear for their deeply buried nuclear weapons facilities because of its use. Theater air planners matched it to the target set.  It hasn’t previously been used in combat because most of American combat since the bomb’s introduction into the inventory has been in urban or heavily-populated terrain, which would unduly risk civilian casualties.

And that’s the interesting part of Thursday’s operation: ISIS has infested the sparsely-populated Afghan-Pakistani border region, the U.S. apparently had good intelligence on their location, and took action to kill as many ISIS fighters as possible while they were training and organizing, before they deployed to an area of operations.

One of the principal impediments to winning the war in Afghanistan has been the sanctuary Al Qaeda, the Taliban, and other malign actors have had because of the limited Afghan government reach into the borderlands and Pakistani complicity in their activity as a way to have influence in Afghanistan.  Former Afghan President Hamid Karzai has already taken to twitter to condemn the use of the weapon, increasing the pressure on his successor to likewise denounce it.

Which means that our military operations may be at odds with the leadership in both countries whose policies must align with ours for the current strategy to succeed. And that in turn increases the likelihood that the Trump administration’s Afghanistan policy review will elect to wind down our current nation-building strategy for Afghanistan, and instead narrow our policy from a counter-insurgency to a counter-terror approach, ceasing to help the Afghan government to secure its territory and improve its governance and instead using military force to reach in and attack suspect activity.  Ironically, that will involve more military strikes Hamid Karzai disapproves of.

Kori Schake is a Hoover Institution Research Fellow at Stanford University. She is the editor, with Secretary of Defense James Mattis, of "Warriors and Citizens: American Views of Our Military."