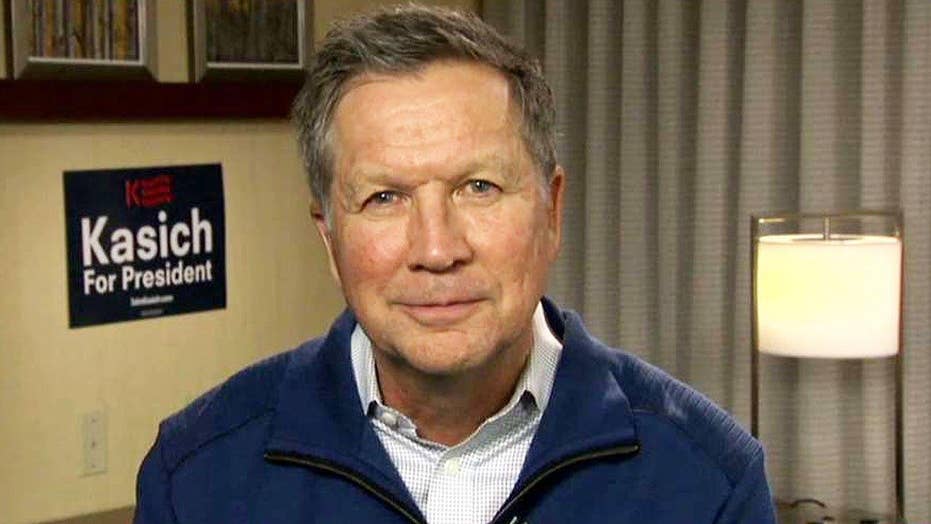 Kasich: We want to be a story coming out of New Hampshire

On 'Hannity,' presidential candidate explains why he has to win in the Granite State

I’ve thought long and hard about who should be the next president.

If there’s one thing 22 years in the military taught me, it’s that we need an adult in the White House.

Someone who’ll stand up to our enemies abroad. Someone who is responsible enough to command the world’s most powerful military. Someone who’ll rise above the din of toxicity infecting our national dialogue and unite our bitterly-divided public. Someone who can work with both sides while remaining true to their core beliefs.

That adult, in my view, is Governor John Kasich, who for the first time since I left the GOP in the early 90’s to become an Independent has me excited about the GOP.

The GOP is in trouble. Without expanding the tent—reaching out to a wider and more diverse pool of voters—the GOP will likely lose in November.

That’s not speculation. It’s a fact—one that played out in the 2012 election, and one the GOP acknowledged afterward.

So much for that. Instead of a new message of unity and inclusion, we’ve gotten division and antagonism.

We’ve gotten Donald Trump’s bigoted rhetoric against Latinos and patriotic Muslim Americans. We’ve had little focus on issues important to African-Americans, like lifting communities out of poverty; or criminal justice reform, which everyone—from the Koch brothers to Bernie Sanders — agrees must be addressed.

This Republican primary, in my view, has been an embarrassment. It’s led me to wonder if America’s best days are behind it.

It’s time for the GOP base to have a reckoning with reality – bigotry in the form of scapegoating and puffery are not a platform – it’s time to choose the one adult in the field, John Kasich.

Fortunately, there’s been a voice of sanity -- John Kasich.

He’s focused on his record, and it’s an impressive one.

Back in the 90’s, Kasich and fellow Congressional Republicans made smart policy compromises with President Clinton.

Compromise. I know that word is anathema to Ted Cruz, but it led to prosperity in the 90s, massive surpluses and balanced budget. Last time I checked, those are in line with conservative principles.

I reject the criticism that Kasich isn’t a conservative. It’s ludicrous — especially from those looking for the next Ronald Reagan. Reagan, today, would be a RINO.

Some say allowing Medicaid expansion in Ohio proves Kasich is a “closet liberal.” It’s ridiculous. On Medicaid, Kasich was unwilling to cow tow to extremists.

Admirably, he put principles ahead of what was in his best interest politically -- that takes guts. Some said it would collapse the state’s finances. In fact, Ohio has a balanced budget and significant surplus.

When it comes to security and the military, we need a steady hand.

I cringe when I hear the term “carpet bombing” from Senator Cruz; or when Donald Trump proposes taking Syrian or Iraqi oil for our benefit. Both are war crimes, and reflect ignorance toward a complex world.

Another candidate suggested finding out if “sand can glow in the dark.” Was he proposing using nuclear weapons against ISIS?

That’s not strength, it’s senseless puffery. Voters should ask themselves if they’d like to “feel safe” or “be safe.”

We cannot pretend fear-mongering and bigotry qualifies a person to serve as our Commander-in-Chief.

An issue dear-to-my heart is care for our veterans, and I firmly believe John Kasich BY FAR the best choice to root out corruption at the VA and honor our most sacred national obligation -- caring for those who fought for our freedom.

It’s time for conservatives to alter course and channel their anger into an aspirational message; to present a vision that appeals to a majority of Americans.

This contest has come down to who can scream the loudest and it’s come down to bigotry, which marginalizes huge segments of voters.

Democrats, at least, are having a substantive debate on issues. They’re behaving like grownups, and when push comes to shove, Americans want a grownup as president.

I don’t agree with John Kasich on everything.

I differ from him on drug policy, on a woman’s right to choose, on education.

However, I believe he’s a man you can trust; a man who’ll look you in the eye, hear you out, and have an honest conversation.

America doesn’t necessarily need a candidate with whom each of us always agrees. America needs a candidate that inspires us to believe our best days are still ahead, and John Kasich is that candidate.

If the GOP base doesn’t wise up quickly and unite behind the one candidate who can beat Hillary Clinton, it will have only itself to blame for her election.

Montel Williams is a graduate of the United States Naval Academy who served 22 years in the Marine Corps and the Navy. He went on to host the Emmy award-winning "Montel Williams Show" for 17 seasons and is now a noted activist on veterans issues. Follow him on Twitter @montel_williams and on Facebook at Facebook.com/montelwilliamsfan.