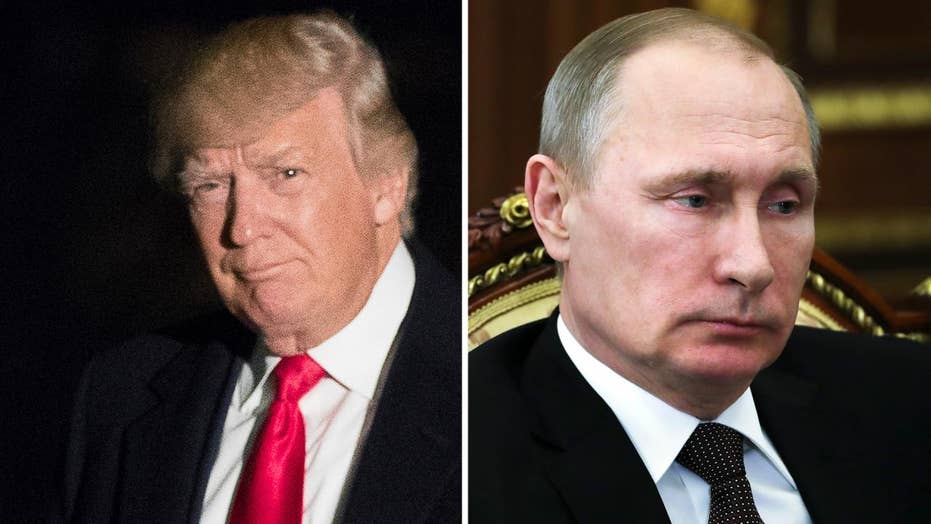 Russia cuts back on positive coverage of President Trump

Officials scale back their optimism of what one top diplomat calls a new post-West world order; Rich Edson explains on 'Special Report'

No single foreign policy challenge is more contentious, or crucial, than getting Russia right. Under President Donald Trump, Republicans and Democrats have embraced diametrically opposing views on how to handle President Vladimir Putin.

Both have it wrong.

Throughout the campaign and the initial days of his presidency, Mr. Trump has continued to express admiration for President Putin and his desire for warmer relations with Moscow.

Though he seemed to backtrack at a press conference in Washington and a weekend rally in Florida, and though Vice President Mike Pence offered boilerplate reassurances at a conference in Munich that Washington intends to hold Russia “accountable” for provocations aimed at undermining NATO and the European Union, Mr. Trump himself has clung to his view that closer cooperation with Russia is needed to defeat ISIS and radical Islamic terrorism. “If we have a good relationship with Russia, believe me,” he said, “that’s a good thing, not a bad thing.”

Resisting Russian intimidation should be more than a campaign slogan. While almost no one wants a return to the Cold War, a world in which Russian hegemony is unrestrained increases the chance of global conflict.

Given Mr. Trump’s odd bromance with Russian’s autocratic ruler, many analysts in Washington and Moscow expect him to try to repeal or reduce the sanctions imposed after Russia illegally annexed Crimea from Ukraine in 2014 -- a prerequisite, the Kremlin has made clear, for warmer ties.

After Flynn’s dismissal, House Minority Leader Nancy Pelosi called for the creation of a bipartisan, independent commission to “expose the full extent of Russia’s influence on the election and this administration. Senate Minority Leader Chuck Schumer warned Trump officials not to try to cover up improper contacts with Russian intelligence. Flanked by fellow Democratic senators Dianne Feinsteinand Mark Warner, Sen. Schumer insisted that records of contacts between Mr. Trump’s campaign, transition, and administration officials be kept. “I’ve been in Congress for a long time, I’ve never seen anything like this,” Sen. Schumer fumed with outrage.

But Democrats have attacked Mr. Trump’s Russia policy mainly as a partisan weapon. Their criticism is aimed not at reversing his dangerous approach towards Russia, but undermining his political clout and legitimacy. Seeing Russia policy primarily through the lens of domestic politics, in turn, serves to trivialize it and weakens calls for what should be a serious debate about what kind of Russia policy best serves American interests.

For his part, Mr. Putin has has lost little time capitalizing on America’s partisan divide. Sensing Trump’s reluctance to criticize, much less counter his meddling in Europe’s elections and other provocations in Eastern Europe, the Balkans, Middle East and Asia,and the Democrats’ use of that reluctance for partisan gain, Mr. Putin has grown ever bolder.

Mr. Trump has done nothing about the presence of a Russian spy ship loitering off the East Coast, Russian fighter jets buzzing a U.S. destroyer in the Black Sea, or a ballistic-missile test that many military experts have interpreted as a violation of arms accords.

He has been silent on Russian hacking and other attempts to elect pro-Russian candidates in elections in the Netherlands, France and Germany who, like Mr. Trump, question the value of NATO and continued membership in the European Union–pillars and symbols of America’s leadership of the west.

Though Russia has denied such intervention, its cyberhacking, financing of pro-Russian candidates, and spread of disinformation appear to be focused most heavily for now on defeating German Chancellor Angela Merkel, Europe’s most influential champion of European unity and maintaining sanctions on Russia over Mr. Putin’s annexation of Crimea.

A truly bipartisan policy would enable Congress, among other things, to end sequestration so that the U.S. military can have sufficient resources to contain Russia. Resisting Russian intimidation should be more than a campaign slogan. While almost no one wants a return to the Cold War, a world in which Russian hegemony is unrestrained increases the chance of global conflict.

Partisanship in America may be growing. But unless Republicans and Democrats, liberals, moderates and conservatives unite to support the nation’s core interests and values, Putin will continue to benefit.