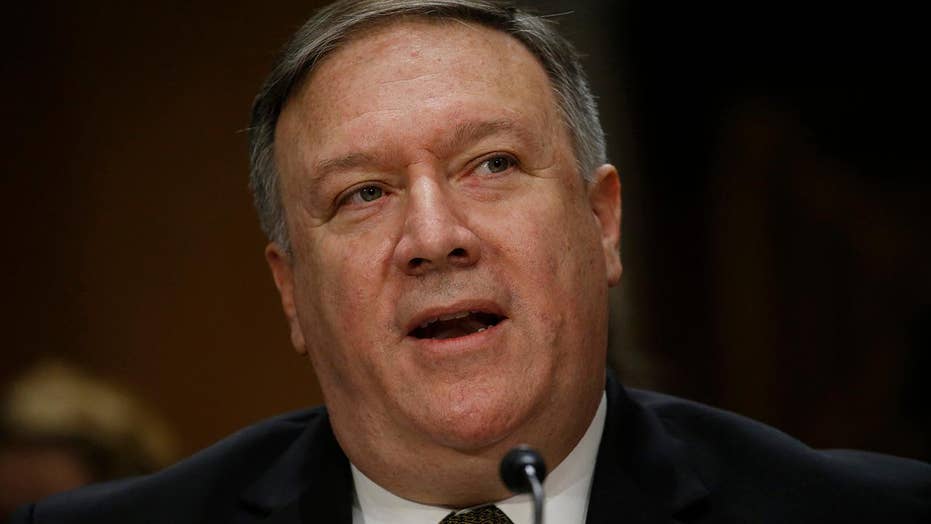 All of the committee Democrats and Rand Paul say they will vote against the secretary of state nominee. Rich Edson reports from Capitol Hill.

CIA Director Mike Pompeo is highly qualified to be our next secretary of state and President Trump made a wise choice in nominating him to become America’s top diplomat. Following Pompeo’s confirmation by Senate Foreign Relations Committee on Monday, he seems all but certain to be confirmed by the full Senate.

Every Democratic on the Foreign Relations Committee voted against confirming Pompeo on Monday. And Sen. Rand Paul, R-Ky., who earlier said he would oppose Pompeo, changed his mind at the last minute and threw his support to Pompeo in the committee vote.

On top of that, two Senate Democrats not on the committee – Joe Manchin of West Virginia and Joe Donnelly of Indiana – announced Monday that they would support the confirmation of Pompeo as secretary of state when the full Senate votes.

Earlier, another Democrat not on the committee – Sen. Heidi Heitkamp of North Dakota – said she would vote to confirm Pompeo as well. The support of these three Democrats should assure Pompeo of the support he needs to become secretary of state.

Most Democrats would rather play politics and try and score points with their base than put our own nation’s interests first. Their opposition to Pompeo has no justification, because Pompeo is one of the most qualified and respected nominees for secretary of state in decades.

All three Democrats face re-election races in November in states that supported Donald Trump in the 2016 presidential race. On the Pompeo vote, all three should be commended for putting patriotism over partisanship in saying they will vote to support President Trump’s nominee.

Pompeo, who served as a Republican member of the U.S. House from Kansas from 2011 until he became CIA director last year, has a wealth of knowledge when it comes to foreign affairs.

Regrettably, most Democrats would rather play politics and try and score points with their base than put our own nation’s interests first. Their opposition to Pompeo has no justification, because Pompeo is one of the most qualified and respected nominees for secretary of state in decades.

Failure to confirm Pompeo to head the State Department would put America’s most important negotiations with North Korea in years in mortal jeopardy. That’s because if Pompeo’s nomination were to collapse, North Korean dictator Kim Jong Un may rightly wonder if has a viable partner on the other side of the negotiating table that he can do business with.

And putting any doubt in Kim’s head, especially at a time when we are trying to convince him to give up his nuclear weapons, would be a huge mistake.

It’s worth noting where we are when it comes to negotiations with North Korea and how such talks could be derailed if President Trump was denied his choice of Pompeo to be secretary of state.

Pompeo recently met with Kim in the most high-level meeting between America and North Korea since Secretary of State Madeline Albright visited the North near the end of the Clinton administration. So it’s important that Pompeo continue to serve as a channel between the Trump administration and the Kim regime.

After spending several days in talks with top North Korean officials, Pompeo may have a better sense than any other American about North Korea’s negotiating position on the nuclear issue – and whether Kim would give up his nuclear weapons and long-range missiles under any circumstances.

Loosing Pompeo now would mean we lose everything he learned on his trip to North Korea as Kim’s calculus of the situation would change – and we would need to start our approach to North Korea all over again. Kim might even conclude that divisions between the Trump administration and Congress are so deep that there is no point in trying to reach an agreement with the administration, because he might not feel he can trust America to keep its word.

While there are several other potential State Department heads who could speak directly to the North Koreans, there is no person on Team Trump who seems to have the working relationship, time in the administration and respect of the president that Mike Pompeo does.

So it stands to reason that Pyongyang might have even requested to speak with Pompeo, knowing that he has a close bond with President Trump. The more Kim thinks he is to talking to someone who knows how President Trump thinks, the more comfortable he will be in agreeing to conditions to allow a summit, and to reaching agreements at the summit.

While I certainly hope that a Trump-Kim summit goes forward and Pyongyang agrees to give up its nuclear weapons over a short period in a verifiable manner, history tells us this offer of a summit is most likely North Korea laying a giant trap for President Trumps to step into.

We need someone like Pompeo at President Trump’s side to help the president deal with such a trap. For example, if President Trump demands a timetable for North Korea to give up its nuclear weapons that includes international inspectors and Pyongyang tries to stall or have the meeting before such a blueprint is put forward, what should President Trump do?

And if no agreement is possible between the U.S. and North Korea, then what happens? Pompeo could play a critical role in taking us back from the brink of war.

If the Trump-Kim summit collapses or never even happens, President Trump would only have two choices left when it comes to North Korea:

?         Go to war to denuclearize the North, risking a nuclear conflict that could result in millions of deaths.

?         A containment strategy that won’t be easy and that could span years.

Knowing that Pompeo has seen the intelligence, has met with Kim Jong Un and has a better understanding than most likely anyone else of the stakes involved, there is no one better to have as our secretary of state at this dangerous time.