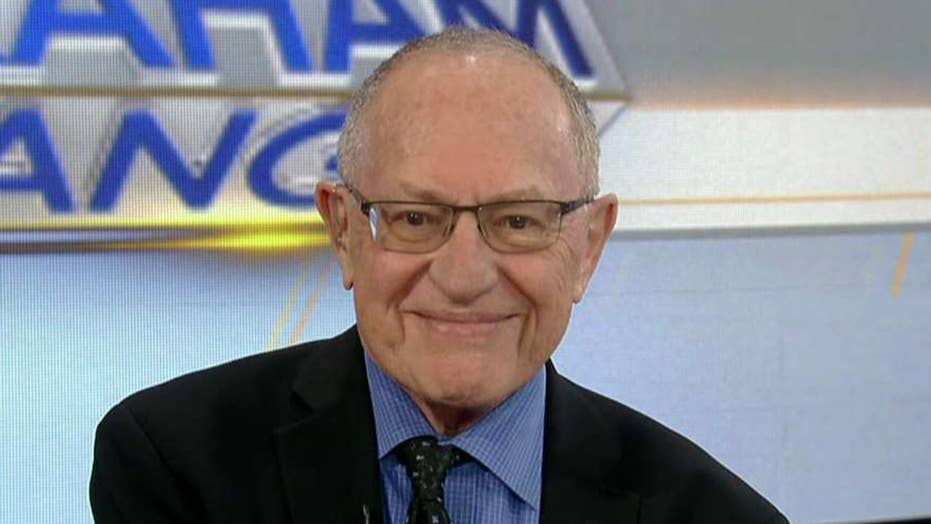 Dershowitz: It's not obstruction if the president acted within his authority

Harvard law professor Alan Dershowitz reacts to obstruction accusations against Trump in the fallout from the Mueller report on 'The Ingraham Angle.'

Yes, President Trump committed obstruction. From the moment he defeated Hillary Clinton, Democrats have tried to overturn the 2016 election, but Trump has obstructed their efforts every step of the way.

This was obstruction in the interests of justice. The president should be applauded for it.

First, partisans within the Justice Department spied on the Trump presidential campaign. They used a mainstream news article to obtain a warrant to surveil Trump’s campaign staff by misleading a Foreign Intelligence Surveillance Court judge about the source of the article.

In fact, the news story was based on unverified opposition research funded by the Clinton campaign and the Democratic National Committee.

Recently uncovered text messages between disgraced FBI agent Peter Strzok and FBI lawyer Lisa Page suggest this surveillance continued after the election, shifting its focus from the Trump campaign to the transition team of then-President-elect Trump.

Then, according to fired FBI Deputy Director Andrew McCabe, several Justice Department and FBI officials discussed staging what would have amounted to a coup to oust the duly elected president of the United States from office.

The coup would have been staged by invoking the 25th Amendment to remove President Trump from office.

Now desperate Democrats, bereft of any legal basis for impeachment, have seized upon Trump’s displeasure at two years of presidential harassment as their new grounds for removing him from office.

The amendment was adopted to deal with cases when a president is unable to carry out his duties following a severe injury or illness – such as being wounded in an assassination attempt, suffering a stroke, or being in a coma. None of these conditions applied to President Trump.

Deputy Attorney General Rod Rosenstein allegedly suggested wearing a wire to secretly record conversations with President Trump in the hopes of entrapping him to lead to his overthrow.

Next, Trump’s critics called him a traitor. Sen. Tim Kaine, D-Va., who was Hillary Clinton’s vice presidential running mate in 2016, suggested that Trump might have committed treason as early as July 2017 – just two months after Special Counsel Robert Mueller began his investigation into Russian interference in the 2016 election.

Then John Brennan, who was CIA director under President Obama, described President Trump’s conduct as “nothing short of treasonous.”

Others leveled the same false charge at President Trump as well.

After that, government leakers and their mainstream media allies discussed imprisoning members of President Trump’s family along with him.

According to the narrative, Donald Trump Jr. and presidential son-in-law Jared Kushner were destined for orange jumpsuits over an allegedly nefarious meeting with some Russians at Trump Tower. There was even talk of the president’s daughter Ivanka going to prison.

A writer for Vice.com reported giddily on the reaction of federal inmates to the prospect of an incarcerated Trump.

Democratic politicians clamored for the impeachment of President Trump. Many said they expected Mueller’s investigation would show that Trump worked with Russia to get elected. In their minds, the president was guilty until proven innocent.

Now desperate Democrats, bereft of any legal basis for impeachment, have seized upon Trump’s displeasure at two years of presidential harassment as their new grounds for removing him from office.

Over the past two years, President Trump has voiced his displeasure at what he considered unfair attacks. According to the Mueller report, upon the appointment of the special counsel, Trump said that “this is the end of my presidency,” followed by an expletive.

The Mueller report then quoted Trump as saying: “Everyone tells me if you get one of these independent counsels it ruins your presidency. It takes years, and I won’t be able to do anything.”

The president took to Twitter to assail the special counsel’s investigation as a “witch hunt.” He allegedly considered firing Robert Mueller.

According to Attorney General William Barr, President Trump didn’t obstruct justice. But neither did Trump take attacks on his presidency lying down.

Sen. Elizabeth Warren of Massachusetts, one of 20 Democrats seeking her party’s presidential nomination to replace Trump, tipped her party’s hand when asked recently to cite the grounds for impeachment.

“This isn’t even specifically about Donald Trump himself,” Warren said. Right – it’s about overturning the results of a presidential election that didn’t put Hillary Clinton in the Oval Office.

Now Democrats would like to impeach Trump for obstructing their repeated attempts to overthrow him.

As far as many Democrats are concerned, Trump’s real crime was winning the presidency in the first place.