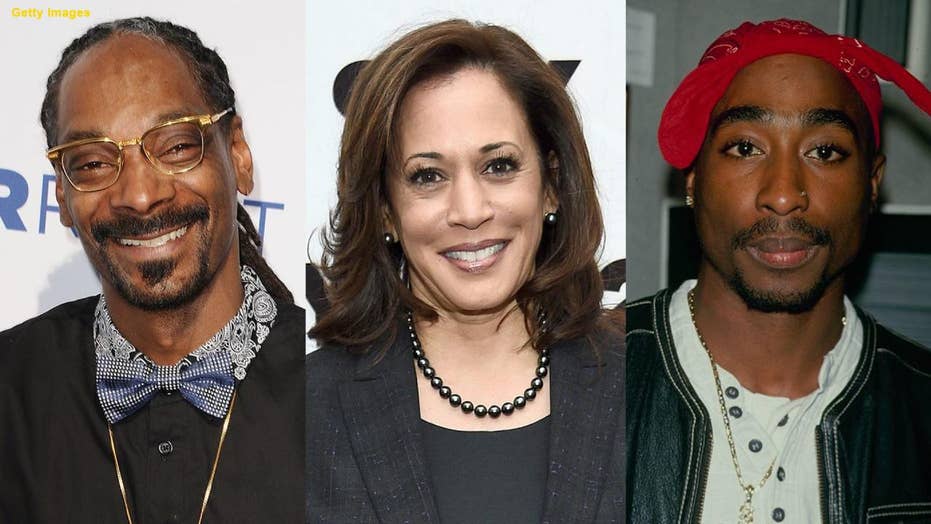 Kamala Harris says she listened to Snoop Dogg and Tupac in college, yet their albums came out after she graduated

Sen. Kamala Harris of California says she loved to smoke the Devil’s Lettuce in college, especially while jamming to Tupac and Snoop Doggy Dogg.

Sen. Elizabeth Warren of Massachusetts has little or no Native American ancestry, despite decades of claiming American Indian heritage for professional advantage, but she believes strongly in “the importance of lifting up and celebrating Native voices,” as she herself will tell you ad nauseam.

Sen. Cory Booker of New Jersey wants you to adopt his faddish diet lest the world’s upwardly mobile hordes “destroy our planet” by eating meat.

And when former U.S. House member and defeated Senate candidate Beto O’Rourke isn’t skateboarding through fast food parking lots, he passes his unemployed hours writing angsty public diary entries. He’s “been stuck lately,” you see, “in and out of a funk.”

These puerile Democratic politicians appear more inclined to run for president of their high school class than president of the United States. Yet Harris, Warren and Booker have announced their candidacies for the White House, while O’Rourke continues to ponder whether to run.

Has Harris ever tried marijuana? Her “memories” of smoking pot include listening to Tupac and Snoop while studying at Howard University, where she graduated in 1986 – five and seven years, respectively, before Tupac and Snoop released their debut albums.

More likely, the tough-minded Harris spent her years at Howard listening to Brahms and studying for law school. But her campaign spends precious little time advertising the candidate’s nearly three-decade career as a prosecutor, preferring to focus instead on “mood mixes” and marijuana.

Racial fraud aside, Warren could make a substantive case for her presidential qualifications. She was a tenured professor at two of the most prestigious law schools in the country. And she has influenced significant matters of public policy, from the implementation of the Troubled Asset Relief Program to the founding of the Consumer Financial Protection Bureau.

Yet instead of launching her presidential bid on her progressive policy accomplishments, Warren chose release a DNA test that suggested she might be 1/1,024th Native American.

Booker, a Rhodes scholar educated at some of the world’s finest universities, chose to make his opening argument for office not on his accomplishments as mayor of Newark or senator from New Jersey, but rather through a series of carefully choreographed temper tantrums in which he “cried tears of rage” and compared himself to Spartacus, a Thracian gladiator from the late Roman Republic.

Beto O’Rourke served in Congress and on the El Paso City Council for a dozen years before trying and failing to unseat Republican Sen. Ted Cruz. Has he even once referred to his actual record in elected office in his quest for national office?

A bug and feature of democracy is that the people get what they want. Our elected officials reflect the people who put them in office.

For Democrats seeking the 2020 presidential nomination, that means even potentially substantive candidates must abase themselves to appeal to their childish primary base.

Former prosecutor Harris needs the support of a party that complains about law enforcement in our cities and at our border.

Warren needs to attract primary voters in the throes of intersectional identity politics.

Beto O’Rourke – whose real name is Robert Francis O’Rourke – must appeal to voters at a time when women and minority candidates are enjoying great popularity.

So the candidates try on new identities and talk like schoolchildren about their favorite music, diets, drugs and feelings.

The sophomoric contest is only a prelude to the real battle. Whoever wins the Democratic presidential nomination is expected to face President Trump in November 2020.

The presidential nominees will debate economic growth, border security, trade, war, late-term abortion and other issues. Unfortunately for the eventual Democratic nominee – and to the incumbent’s advantage – general elections are no child’s play.