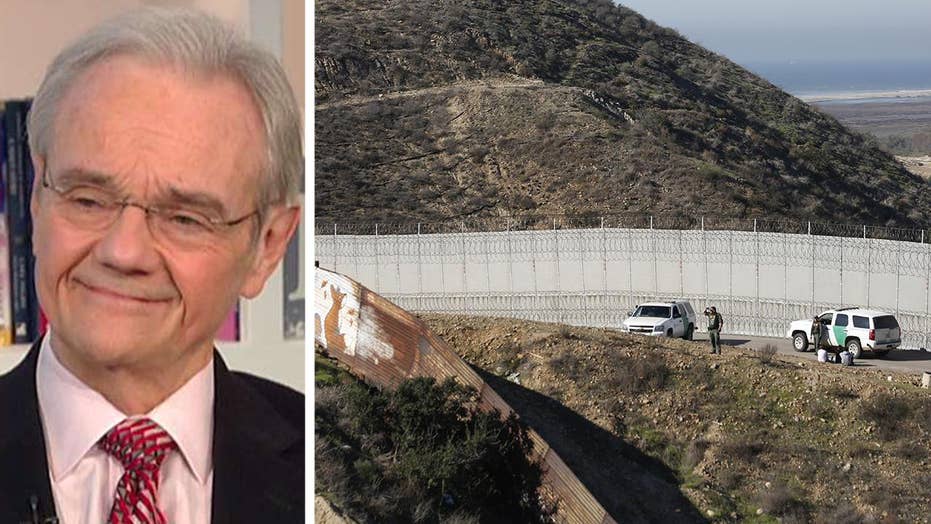 The wall. Say those words and you need say no more. There is only one wall on America’s mind.

It was even the protagonist in a White House reality show. The TV ratings were boffo!

Candidate Donald Trump vowed to build the wall on the Mexican border if elected, and has had only minimal success. The migrant caravans from Central America ­refocused attention on its absence at key crossing points.

But the wall has grown into something larger than itself. It is the ultimate symbol of Trumpism to both supporters and opponents.

To supporters, the wall, combined with better trade deals, is synonymous with America First. The promise to build barriers for much of the 2,000-mile border is key to Trump’s plan to end decades of mass entry by illegal immigrants, some of them violent, and stem the flow of narcotics.

To Democrats, the wall symbolizes an anti-immigrant agenda that some call racist. Nancy Pelosi calls the wall “immoral,” even though walls already exist at various points along the border.

Democrats, including Hillary Clinton when she was in the Senate, supported walls and backed expansion as part of a large immigration package, but the open-border movement is surging in Pelosi’s party. Besides, with Dems taking the House and prosecutors determined to nail Trump, the growing impeachment movement won’t allow the president any policy victory.

Pelosi and Chuck Schumer are thus adamant that additions to the wall aren’t necessary and offer their support for just $1.4 billion in government funds for maintenance and added security.

Trump, who sent the military to provide border assistance, swears he will shut down the government if he doesn’t get a deal for $5 billion in wall money by the end of this week. Both sides believe they have the political advantage in the standoff — but both can’t be right.

Perhaps there is a third way, one that would provide the money and keep the government open.

Let the people who support the wall pay for it — directly and voluntarily. That’s what a number of readers suggest.

They were responding to a letter I published last week from a man named Nolan Thomson Hare. He wanted to know how he could help fund a barrier, asking, “Can you please give me a note about where I can find a campaign organized to collect money from the general public?”

If Congress won’t secure the borders, then it is necessary for the public to step in. It would be a modern and critical twist on the Founders’ ideal of self-government.

I didn’t have an answer, but asked for suggestions. The response was quick and enthusiastic, and here are examples.

“I just said to my wife this morning that someone should start a GoFundMe site for the wall,” said reader Robert Zorcik.

“It seems that the taxes we pay are not going to be spent for our border protection by Chuck and Nancy and a number of Republicans.

Jack Murray was blunt and creative. He did the math and came up with this calculation: “If the 63 million people who voted for Trump each pledge $80, we can build the wall.”