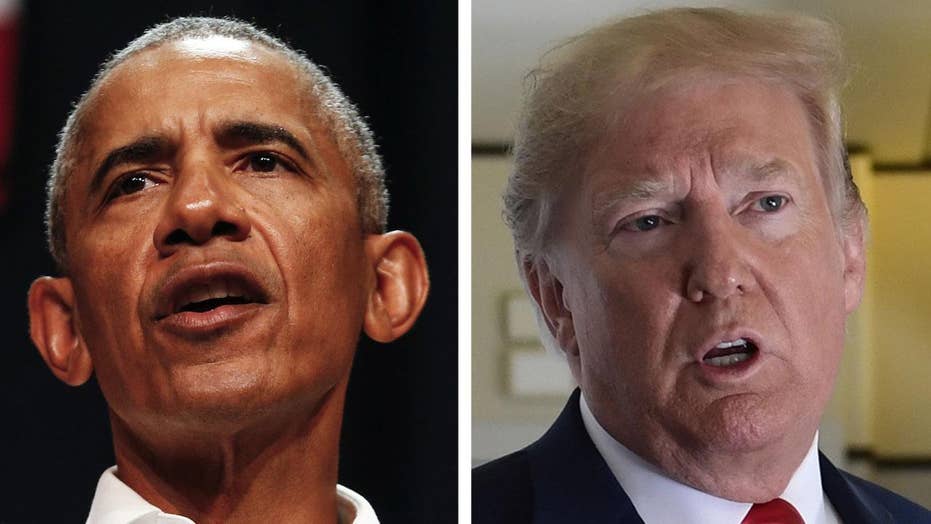 The former president hits the campaign trail for Democrats.

With Hillary Clinton already part of the midterm scrum, Barack Obama’s entry last Friday shows the old band is getting back together again. So far, the music is uninspiring.

Clinton, as usual, is all about the money. Her latest slush fund, ­Operation Together, sent an ­email offering donors a “Resist” sticker if they send her $5. I was able to resist the offer.

Twitter promoted it as a “candid speech,” which is accurate only if you think Obama is an honest politician. Twitter’s bias is showing again.

It’s true there were some clever and cutting lines about President Trump being divisive, but to appreciate them, you had to forget Obama’s eight years in the Oval Office. Those without amnesia will recall that polls said Americans thought the nation was more divided when he left than when he started, ­including along racial lines.

Obama’s harsh partisan tone Friday, complete with his typical mocking of Republicans, was in striking contrast to the odes to ­bipartisanship voiced at Sen. John McCain’s funeral. Too bad Obama wasn’t there . . . oh, wait, he was.

Not surprisingly, he seemed bitter about the way the country is moving on without him. It still hasn’t dawned on him that, by 2016, America wasn’t buying what he was sellinng.

While campaigning for Clinton then, he said it would be a “personal insult” if young people and nonwhites didn’t turn out in big numbers. That they didn’t could explain why much of his speech had a scolding tone about voting.

But as someone said about empty sports stadiums, you can’t force people to go to the game if they don’t want to.

The already-revealed misconduct at the top levels of the FBI amounts to a scandal of historic proportions — and it is almost certainly the tip of the iceberg.

Inadvertently, Obama did have some funny lines, as when he claimed credit for the rousing economy. He also demanded “a restoration of honesty and decency and lawfulness in our government.” Even Hillary must have cackled over that one.

Count Sen. Lindsey Graham. R-S.C., as among the unimpressed.

“The more former President Obama speaks about the ‘good ol years’ of his presidency, the more likely President Trump is to get re-elected,” he tweeted.

Trump claimed he fell asleep during Obama’s speech, but now that Obama and Clinton are active again, the president had better wake up to seize advantage of the ripe target they present.

If so, he will finally start releasing the files that chronicle the effort by the Obama White House, FBI, Justice Department, State Department and the CIA to help Clinton and stop him in 2016.

The already-revealed misconduct at the top levels of the FBI amounts to a scandal of historic proportions — and it is almost certainly the tip of the iceberg.

There is every reason to believe there exists compelling evidence that would implicate numerous officials across the Obama administration, including power players John Brennan, Susan Rice and James Clapper.

But that evidence remains hidden because Deputy Attorney General Rod Rosenstein won’t give it up. A handful of congressional Republicans have been diligent in trying to get the mother lode, but Speaker Paul Ryan offered little help and they have been stymied.

Trump himself has been strangely serene, confining himself to tweets instead of using his power to declassify the documents and make them public. However, he did promise The Daily Caller last week that his team is “very seriously” looking at declassifying documents the FBI and Justice submitted to the FISA courts to get a spying warrant on Carter Page two years ago.

There are numerous issues at stake with those documents alone, the most important being whether officials misled the judges about what information they had that would justify using the Foreign ­Intelligence Surveillance Act to spy on an American citizen.

Based on public evidence so far, it’s likely the officials had little, and perhaps nothing, more than the unverified Russian dossier on Trump that was secretly financed by Clinton through a law firm. The FISA documents presumably would also reveal whether the judges knew that its British author, Christopher Steele, said he was determined that Trump not be elected and that the FBI had hired, then fired, Steele for lying.

A number of readers have written to say they believe Trump is waiting until the fall campaign heats up before releasing the documents. If they are right, the time is close.

But releasing the documents is not only a campaign issue. This is fundamentally about transparency and piercing the armor of excessive secrecy that shrouds too much of what the government does in the name of the governed. Secrecy is especially galling when used to protect wrongdoing or simple embarrassment.

Trump might even make common cause with Sen. Spartacus. Also known as Cory Booker, the New Jersey Dem led a revolt in the Senate over the release of documents related to Supreme Court nominee Brett Kavanaugh’s White House work under President George W. Bush.

So far, the documents Sen. Spartacus and other Dems released in their grandstanding ploy don’t damage Kavanaugh’s path to confirmation, but that only underscores the value of transparency. It exposes the truth in all occasions.

As the late Supreme Court Justice Louis Brandeis famously said, “Sunlight is said to be the best of disinfectants.”

If there is anything all Americans should be able to agree on, it’s that our government needs much more sunlight.