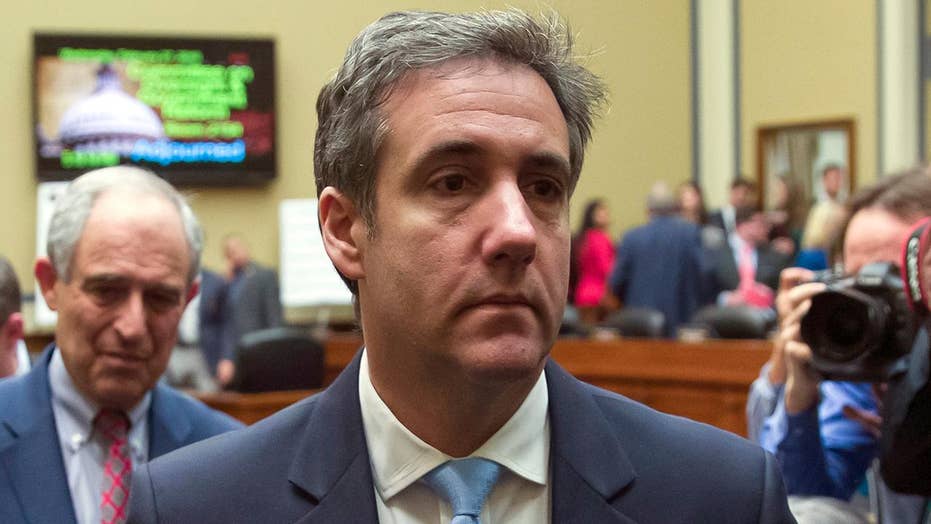 Texas Republican Rep. Will Hurd says he does not believe anything new will be learned from the House Intelligence Committee’s closed door meeting with former Trump attorney Michael Cohen.

Lights, camera, Cohen. Democrats got the reality show they wanted out of President Trump’s fixer-turned-enemy, with their star witness parroting the party’s talking points.

Racist, liar, con man, cheat and a threat to democracy -- Michael Cohen accused Trump of all that and more as he came to bury the man he ferociously defended for a decade. Turncoats don’t turn any more dramatically than this, and never on a bigger stage.

There was also a turn-back-the-clock quality to the spectacle. Sitting over Cohen’s right shoulder was Lanny Davis, Hillary Clinton’s longtime pal and now a Cohen lawyer.

Don’t tell Davis and Clinton that she lost the 2016 election. They think it’s not over yet.

Underneath the theatrics, that was the fantasy fueling Wednesday’s hearing, which was allegedly arranged by Davis. He aimed for Cohen to demolish Trump’s legitimacy and set the stage for impeachment hearings before the next election.

He’ll have to do much better than Wednesday to remove a sitting president. Dems are still playing exclusively to Trump haters, a significant force in America but not yet a decisive one.

Don’t tell Davis and Clinton that she lost the 2016 election. They think it’s not over yet.

More to the political point, adding a plan to endlessly torment Trump to a platform of higher taxes, open borders and free stuff doesn’t sound like a formula that will win over the blue-collar workers and middle-class voters who elected him. Congress has a 20 percent approval rating, and there’s no reason to think Wednesday helped.

Meanwhile, the president was in Vietnam, trying to prevent nuclear war on the Korean Peninsula. Some in the GOP protested the timing of the hearing, saying it put politics on the front burner and national security on the back.

They are correct -- but the juxtaposition works to Trump’s advantage. The contrast of him doing important work for peace while Dems were stuck in pure partisanship is striking.

Still, the Cohen show must be measured on its own terms, so the question deserves an answer -- did the hearing work at all? Did the convicted felon and disbarred lawyer help Dems make their case against Trump?

Yes, most obviously in his continuing smearing of the president’s character and integrity. While the hush-money payments are well-documented, Cohen’s repetition of the sordid saga and his allegation that Trump was directly involved guarantees that the issue will not go away.

In fact, his testimony bolstered the belief that the real threat to Trump isn’t special counsel Robert Mueller. It’s the separate probe by federal prosecutors in Manhattan who took over the Cohen case, as well as any Trump matters growing out of it.

For example, Cohen repeated the claim prosecutors insisted he make in his own guilty plea that Trump directed a “criminal scheme to violate campaign-finance laws,” which included disguised reimbursements.

Cohen also said he was aware of other Trump illegalities that he could not discuss because they are still under investigation in Manhattan.

It’s a guessing game what those are, but most likely, they are related to financial issues surrounding Trump’s many businesses and now-defunct foundation. Various Dems asked Cohen who else they should call to testify on those matters, and he was happy to name names, meaning we can probably expect a drumbeat of similar hearings.

Yet it’s equally true that Cohen inadvertently helped Trump combat some of the most persistent and serious allegations against him regarding Russia and the 2016 campaign.

By repeating earlier denials that he never visited Prague, Cohen further discredited one of the key claims of the infamous Russian dossier — that he had been there and met with Russian agents.

Cohen also denied that Trump had directed him to lie to Congress in 2017. This was important because if Trump had ordered Cohen to lie, it could have been a serious article of impeachment.

Most important, Cohen said he was not aware of any collusion between the president and Russia, although when pushed by one Dem, he agreed that Trump’s “desire to win would have made him work with anyone.”

He also debunked a series of hothouse rumors that the left has long wanted to inject into the political bloodstream. One had a Trump love child, another held that there was a tape of Trump hitting his wife, Melania, in an elevator.

Neither story was true, Cohen said, a clear disappointment to Dems and a rare relief to Republicans. They had insisted all day that Cohen couldn’t be believed, but they were happy to take his word on those issues.

On other topics, Cohen gave answers that didn’t clearly cut one way or another. He said he believed Trump knew in advance about the 2016 meeting in Trump Tower with a Russian lawyer who promised dirt on Clinton, although he had no proof.

He also said Trump knew in advance about a WikiLeaks plan to release more of Clinton’s hacked emails in July of 2016, although Republicans insisted the plan had been reported in a British newspaper a month earlier.

Cohen is scheduled to give private testimony to another House panel Thursday, and in May, he’ll begin serving a three-year sentence in federal prison. Unfortunately, we haven’t heard the last of him.

He said publishers and movie makers already have contacted him, thus confirming once again that dumping on Trump is big business in America. Even a convicted liar and tax cheat can strike it rich.