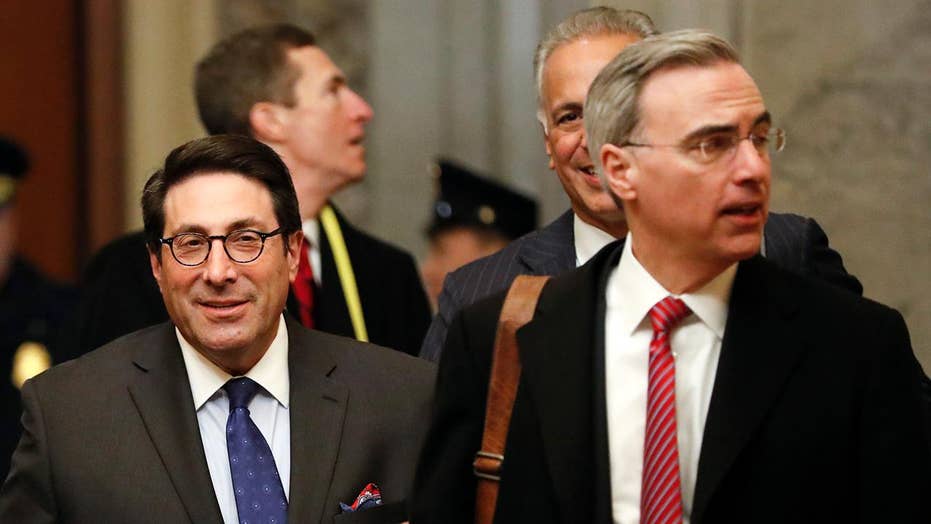 Long before Democrats finished making their marathon impeachment case, momentum had deserted them. The loops of repetition had gone from annoying to unbearable and the wild assertions got even wilder as their talk, talk, talk became a trial of its own.

Despite the historic nature of the event, the public voted by staying away. Many gallery seats sat empty, a fact that recalls a gem from the late Yogi Berra that “If the people don’t want to come out to the ballpark, nobody’s gonna stop them.”

Still, even a fraudulent impeachment is not a laughing matter and until the Senate votes, nothing is guaranteed. To that end, President Trump’s team finally got their first turn at bat Saturday and delivered several big hits in a strong start.

They began with something Trump has said repeatedly, including to me when I interviewed him Jan. 7: “Read the transcript and you’ll see exactly what it is.”

Pat Cipollone, the White House counsel, echoed that view when he told senators the transcript of the president’s call with the president of Ukraine on July 25 “is the best evidence” that Trump “did absolutely nothing wrong.”

He cited passage after passage in the transcript that undercut the Dems’ charge of a quid pro quo involving American military aid in exchange for investigations into Ukraine’s role in the 2016 presidential election and Hunter Biden’s lucrative gig with a corrupt energy company.

After reading each passage, including those on the need to combat corruption in Ukraine and the presidents’ agreement that Germany and France should pony up more aid, Cipollone noted that Dems did not mention any of those in their presentation. He accused them of hiding evidence that didn’t fit their “predetermined outcome” and of trying to pull off “the most massive interference in election history.”

He returned to that point in his team’s final remarks, saying this impeachment amounts to interfering in this year’s election “by removing the President of the United States from the ballot.”