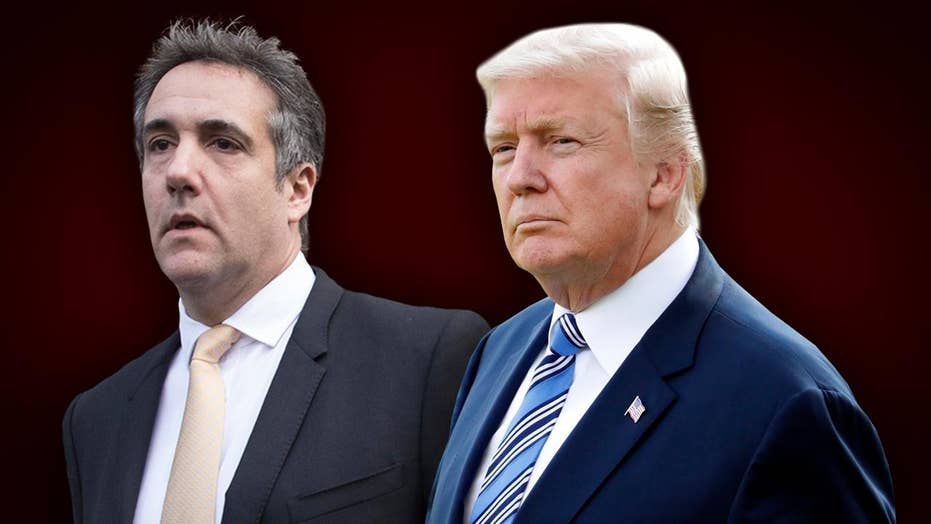 A timeline of Michael Cohen's case: From standing by Trump to implicating him in a plea deal

Despite the guilty plea he entered Aug. 21 to charges of campaign finance law violations, it appears that President Trump’s former lawyer, Michael Cohen, did not actually violate the Federal Election Campaign Act.

“Equal justice under law” is a phrase engraved on the front of the U.S. Supreme Court building, but the Justice Department sometimes fails spectacularly to live up to this ideal. This is illustrated by the way it aggressively targeted Cohen for alleged campaign finance law violations – but gave everyone in Hillary Clinton’s presidential campaign a “get out of jail free card” for such violations.

It is hard to continue to have faith in the objectivity of the Justice Department in the face of what seems like politically driven prosecution decisions to throw the book at Cohen – and implicate President Trump in allegedly illegal conduct – while ignoring clear lawbreaking by the Clinton campaign.

No one is questioning the legitimacy of the guilty pleas Cohen entered Aug. 21 in federal court to six tax evasion and bank fraud charges. But those charges have nothing to do with President Trump. They involve Cohen’s failure to report over $4 million in income from work with taxi companies, along with several hundred thousand dollars in other income, to the Internal Revenue Service.

But you have to wonder about the legal advice Cohen received when he pleaded guilty on the same day to two violations of the Federal Election Campaign Act – the law that governs the financing of federal elections campaigns. Many election law experts, including former commissioners on the Federal Election Commission (FEC), say his conduct, however sleazy, didn’t violate the law.

I’m one of those former commissioners and I’m also a former Justice Department attorney. Based on my experience serving in government and now as a senior legal fellow at the Heritage Foundation, it appears to me that Cohen was innocent of the campaign finance law violations.

The law Cohen pleaded guilty to violating bans campaign contributions by banks, corporations and labor unions. It also limits the amount that an individual can contribute to a candidate. During the 2016 election cycle, that limit was $2,700.

Here’s how the Federal Election Campaign Act works: For the rules, contribution limits, and reporting requirements of law to apply to an expenditure, it has to be made “for the purpose of influencing” a federal election. But such a broad definition could cover anything on which a candidate spends money.

As former FEC Chairman Bradley Smith says, that could include “buying a good watch to make sure he gets to places on time, to getting a massage so that he feels fit for the campaign trail, to buying a new suit so that he looks good on a debate stage.”

So the campaign finance law specifies that such personal expenses are not considered campaign-related expenses even though they might “influence” the election outcome.

Personal expenses are defined as “any commitment, obligation, or expense of a person that would exist irrespective of the candidate’s election campaign.” That would include expenses such as clothing purchases, home mortgages, etc.

Cohen pleaded guilty to “willfully causing an unlawful corporate contribution” and making “an excessive campaign contribution” according to the agreement sent to Cohen’s lawyer by the Acting U.S. Attorney, Robert Khuzami on Aug. 21. The contributions are defined as hush-money payments Cohen arranged to two women who claimed they had affairs with Trump years before the 2016 election.

Also according to Cohen’s plea, another payment of $150,000 was made by the National Enquirer to former Playboy model Karen McDougal for the rights to her story alleging she had a months-long affair with Trump. The tabloid, run by Trump friend David Pecker, never published the story.

The key question in determining whether Cohen broke the campaign finance law is: Were the payments to Daniels and McDougal personal expenses or campaign-related expenses?

Many legal experts don’t believe such payments are campaign-related. Wealthy celebrities are faced with these types of embarrassing claims all the time, and often pay nuisance settlements (even if they are not running for office) to avoid bad publicity.

The Justice Department only prosecuted someone for a campaign finance law violation like the one Cohen pleaded guilty to on one occasion and the department lost its case – despite having stronger evidence.

The previous prosecution took place in 2012 and targeted a former Democratic vice presidential nominee, presidential candidate and senator, John Edwards. The Justice Department argued that $1 million paid by campaign contributors to Edward’s mistress – who was working for his presidential campaign – was a campaign-related expense. Prosecutors said the contribution exceeded the legal limit and should have been reported.

The government was unsuccessful in its claim that these payments were intended to “influence the election” by hiding Edwards’ affair when he was seeking the Democratic presidential nomination in 2008. Edwards was acquitted on one charge and a mistrial was declared on five other counts.

At his trial, Edwards’ lawyers sent a letter to the Justice Department telling the government that in the opinion of two former FEC chairmen – Scott Thomas and Ron Lenhard – the payments to Edwards’s mistress were “not a campaign-related expense and could not be lawfully paid by the campaign or reimbursed by the campaign.”

I have little doubt that President Trump’s opponents would be urging the same U.S. Attorney’s Office to prosecute the Trump campaign for using campaign funds to pay off this personal obligation.

Smith says that “at the very least, the law is murky about whether paying hush money to a mistress is a ‘campaign expense’ or a personal expense.”

So what does this all mean?

It means that experts disagree on whether Cohen’s actions violated the campaign finance law, and some former commissioners at the agency charged with enforcing the law don’t think payments to a mistress fall within the purview of the law.

In addition, another expert on the campaign finance law and a former FEC attorney, Craig Engle, pointed out to me that the payment the National Enquirer made to buy the rights to McDougal’s story also cannot possibly constitute a prohibited corporate campaign finance violation.

The Federal Election Campaign Act contains a broad media exemption that applies to “any broadcasting station, newspaper, magazine, or other periodical publication” unless it is owned by a candidate. Since there is nothing illegal about the National Enquirer buying the story rights, Cohen’s urging the publication to do so can’t be illegal.

Pecker, the head of the company that publishes the National Enquirer, has reportedly been granted immunity for his testimony on this – despite the fact that under that exemption, he can’t legitimately be charged with a campaign finance law violation, no matter what the U.S. Attorney’s Office is telling him.

This gave the Clinton campaign control over the finances, activities and expenditures of the DNC, including more than $84 million raised by the DNC and state Democratic parties.

Cleta Mitchell, one of the foremost campaign finance lawyers in Washington, calls this a “massive scheme to completely evade the legal contribution limits to the Clinton campaign” and the “greatest campaign-finance scandal in history.”

This comes on top of the misreporting by the DNC, the Clinton campaign, and their law firm of the payment to Fusion GPS for opposition research against Trump by former British spy Christopher Steele. This research started the investigation by the FBI and later Special Counsel Robert Mueller of Russia’s interference in the 2016 U.S. presidential election and possible cooperation between Russia and the Trump campaign to help Trump win the election.

The Clinton campaign payment to Fusion GPS was falsely reported to the FEC as “legal fees,” with no mention of who it was paid to or what the actual purpose was – a straight-out violation of the Federal Election Campaign Act.

So what gives? Why is the same U.S. Attorney’s Office ignoring the potential massive violation of campaign finance law by the Clinton campaign, yet lowering the hammer on Cohen for questionable conduct that does not seem to actually violate the law? And why are Justice Department lawyers wasting time pursuing these non-campaign finance violations against other individuals?

The conclusion seems unavoidable: Cohen was targeted for prosecution because he was Donald Trump’s lawyer, and Hillary Clinton’s campaign got off scot-free because she was Trump’s opponent. What we have here is unequal justice under law, based on politics.