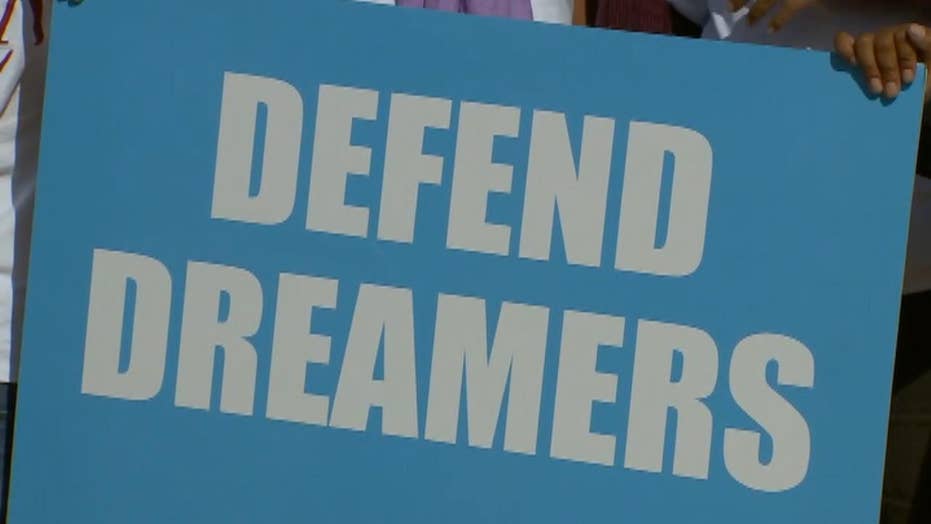 Trump’s DACA demands: What it means for immigration reform

President Trump outlined more than a dozen demands lawmakers must consider before passing immigration and DACA reform. From increased immigration enforcement agents to border wall funding: could the demands stonewall any hopes of legislative action?

Hundreds of protesters stormed the Hart Senate Office Building near the U.S. Capitol on Thursday, hung banners and staged a loud demonstration demanding a no-strings-attached solution to allow immigrants brought to our country illegally as children to remain here. Fifteen were arrested by Capitol Police.

About 800,000 such immigrants have been protected from deportation since 2012 under a program begun under the Obama administration called DACA (Deferred Action for Childhood Arrivals). But in early September, Attorney General Jeff Sessions and the program would end in six months, giving Congress time to pass legislation before then to extend protections for young people now here under DACA, who are known as Dreamers.

I am very pro-DACA. I have advocated both publicly and privately to the White House, including to the president himself, for extending its protections.

Since DACA recipients entered the United States as children, they had no say in violating our immigration laws. As such, they comprise a totally separate category from adult illegals who willfully violate our rules.

I believe a compromise can be reached. But unruly, disrespectful activists make that process harder with their outrageous tactics.

Governing and legislating require compromise. It would be totally foolish for the White House to extend DACA protections without receiving concessions in return, which is what the protestors demanded Thursday.

It is only reasonable for the White House to require more resources to protect our border and action to move toward a merit-based immigration system in return for continuing DACA protections.

Importantly, illegal immigrants – no matter how much empathy I maintain for them – have no standing to make loud demands of the American people. Their attitudes should convey incredible gratitude that this country – unique among nations – shows such compassion to people who do not belong here legally.

As a pro-DACA Latino, I urge these groups to cease using the leftist radical tactics of the so-called “Occupy” movement, and instead make a humble, reasoned case to persuade America why they should be allowed to stay.

The ethical and economic arguments for extending DACA are compelling. But storming a government building and forcing the police to make numerous arrests creates a counterproductive antagonism.

As an analogy, if uninvited guests came to your home and you decided to accommodate them, would your willingness persist if they jumped on your kitchen table, started screaming and pledged to never leave?

Or would you then call the police and have them summarily removed?

Many of these activists would respond that they are, in fact, Americans. Some, like illegal immigrant journalist Jose Antonio Vargas, have created entire careers out of such double-speak, exemplified by his “Define American” group.

Well, Jose, the term “American” can be defined in precisely six words: a citizen of the United States. It is a legal term in a country where rights are defined by laws – not by force.

I am a citizen because I was born here, and I thank God daily for that good fortune. My father was a citizen because he immigrated here legally. This concept is not difficult to understand and is not up for debate.

Legal Hispanics, whether immigrant or native-born, represent a treasure to this country. America so benefits from the culture, hard work, faith, and family ethos of 50 million Hispanics who call America home.

I hope and pray that the DACA young adults are soon welcomed permanently into our country, and I humbly ask Congress and President Trump to ignore the radicals and work expeditiously toward a reasonable compromise.