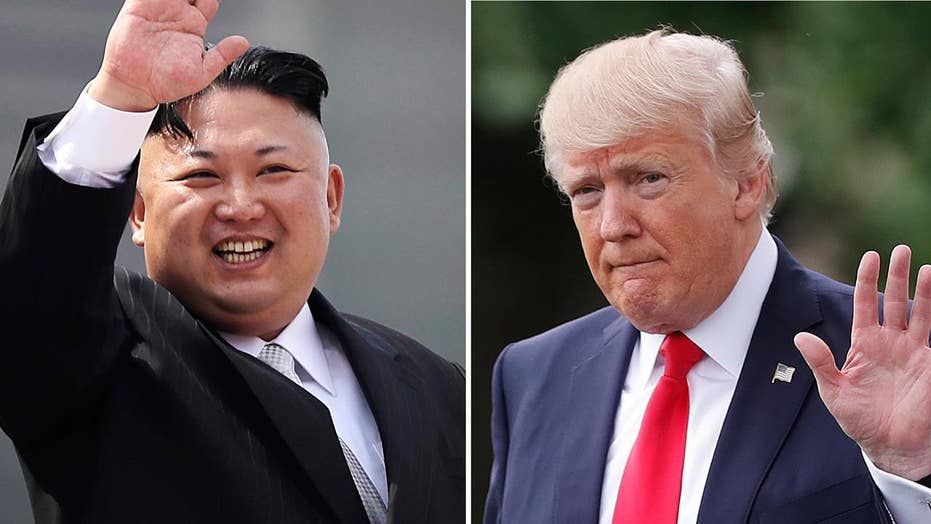 The Trump-Kim summit, designed to discuss U.S. demands that North Korea get rid of its nuclear weapons and agree not to build new ones, had been scheduled for June 12 in Singapore.

However, President Trump cancelled the historic meeting – the first ever by an American president and a North Korean leader. He wrote in a letter to Kim Thursday that the meeting would be “inappropriate” following North Korean expressions of “tremendous anger and open hostility” to the United States.

But after the North responded with a conciliatory statement – free of its usual anti-American insults and saber-rattling – that it hoped talks could still be held, President Trump tweeted Friday night: "We are having very productive talks with North Korea about reinstating the Summit which, if it does happen, will likely remain in Singapore on the same date, June 12th., and, if necessary, will be extended beyond that date."

Will there be a summit between President Trump and Kim? It all depends on Kim. All the photo-ops, hugs and warm gestures in the world aren’t going to solve the North Korea crisis. Kim needs to show he is serious about moving toward denuclearization.

What nearly brought the U.S. and North Korea to the brink of war last year on multiple occasions was Kim’s growing nuclear weapons arsenal, coupled with the North’s long-range missiles that could carry the nukes to the U.S. homeland – potentially killing millions of Americans.

Our allies South Korea and Japan would be far easier targets for a horrific nuclear attack by neighboring North Korea.

Preventing North Korea from starting a nuclear war that could be the most devastating conflict in human history must be the urgent focus of the international community.

We need to look at the North with cold-eyed realism. Even though Kim is not detonating nuclear warheads or flinging missiles over Japan now to test his military capabilities – as he did last year – North Korean scientists are continuing work in their labs to strengthen and expand the North’s atomic arsenal.

Each minute that passes is another minute Kim can build more weapons of mass destruction – by some estimates, one new nuclear weapon every month – using technology the North has already has, without the need for further nuclear tests.

While the whole world is obsessed with summits, the Trump administration needs to focus on only one thing: Will Kim Jong Un give up his nuclear weapons in a way that is realistic and verifiable, offering a plan that is actionable?

If the answer is “yes,” then President Trump and Kim should meet. If not, there is simply no point in legitimizing a dictator whose family has caused the deaths of millions of North Koreans. Holding a Trump-Kim summit just for the sake of holding the summit makes no sense if it won’t result in progress toward North Korean denuclearization.

But how can both sides bridge what seems to be an insurmountable gap?

Kim – at least up until now – is only willing to offer an aspirational pledge to denuclearize, afraid that unilaterally giving up his nuclear weapons will leave him exposed to regime change in the future.

The Trump administration, it seems, is looking for something concrete, with a clear end date for a non-nuclear North Korea, including tough verification measures.

My advice, as I offered on “The Ingraham Angle” on Fox News Thursday, is a simple step-by-step approach, where both sides would give a little in a reciprocal fashion to build trust and end the standoff.

This step-by-step approach seems to have been hinted at in various formats by U.S. State Department officials and even by President Trump in several interviews.

Following a concreate pledge to denuclearize, North Korea would give up one or two nuclear weapons in rapid fashion.

Once these weapons come under some sort of international control and are verified for their authenticity, the United States and its allies – perhaps working with the United Nations Security Council – would remove a small portion of the economic sanctions that have badly damaged North Korea’s economy.

Next, North Korea would surrender several long-range missiles. This could include one or two intercontinental ballistic missiles or – if the North was wary of going that far – perhaps five medium- or intermediate-range missiles. The missiles would be placed under international control and verified. Then more sanctions would be lifted.

Such a process could go on for months and even a little longer, building trust and ensuring that North Korea keeps its word. It could also be expanded to include Kim’s chemical and biological weapons programs.

The step-by-step plan would include clear benchmarks for both sides and what each side gives and takes. It could even include incentives for a much more rapid denuclearization, along with a clear start and end date that must be honored.

Such a plan could also be terminated quickly if things were to sour – or if we discover that North Korea is trying, once again, to cheat on any deal.

If Pyongyang tried to wiggle its way out of such an agreement, tried to stall, or did anything that went against the agreement it could be stopped immediately. The U.S. and our allies would then reimpose the “maximum pressure campaign” and ensure Kim is contained, trapped in isolation until he decides he is serious about abandoning its nukes.

The result, thanks to such a step-by-step approach, would be a world free of Kim’s nuclear weapons and all missiles that could leave his territory. This would also make it impossible for North Korea to build any such weapons in the future through a tough, ongoing verification process. This would need to be accomplished by January 20, 2021 – the end of President Trump’s first term.

Of course, there would criticism of such a plan.

Some would argue that this is just an Iran-style deal and not tough enough because it fails to make North Korea surrender all it nuclear weapons upfront.

I would love to see Pyongyang accept unilateral nuclear disarmament, as Libya did. But considering North Korea’s own statements over anything like the so-called “Libya-model,” I think it seems clear this simply won’t happen.

Having studied North Korea for over a decade, I can tell you that if President Trump insists on such a deal, he will only make Kim dig in his heels. Kim will see the “Libya model” as surrender that could lead to him being ousted from power and killed. So there is virtually zero chance that he will agree to this.

The only process that will work is one in which both sides are making concessions nearly at the same time, allowing everyone to save face, with no one side looking like it is appeasing the other.

But none of this will happen unless North Korea is willing to come to the negotiating table in good faith – and history shows that has never been the case.

Now is the time for the Trump administration to test Kim’s intentions and find out once and for all if he is willing to make history and put the interests of his impoverished and long-suffering people above his own desire to use nuclear weapons inflate his ego and stay in power.