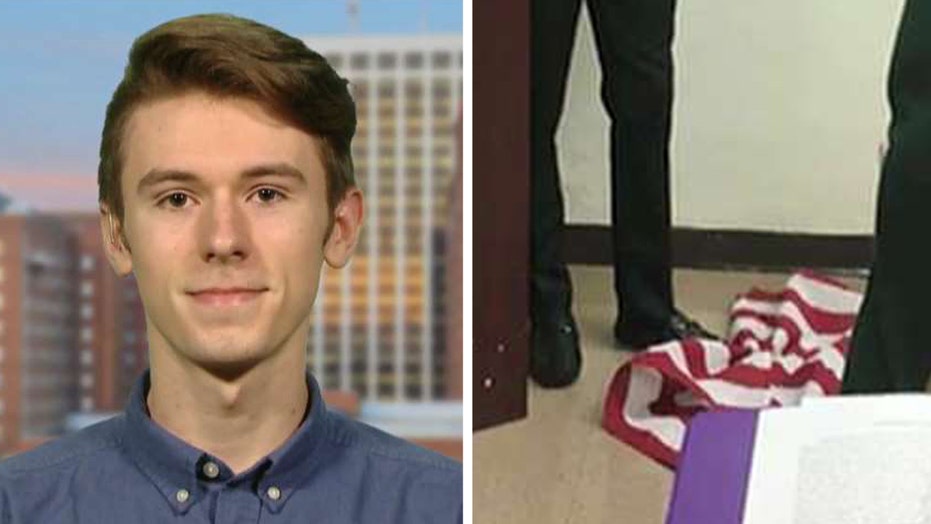 Student speaks out after teacher stomps on US flag

The 16-year-old junior at Massey Hill Classical High School in Fayetteville, North Carolina, is a red, white and blue patriot who loves America.

And he especially loves the American flag.

“I have a father in the military who taught me the way to respect the flag,” Alex told me.

When he saw that his teacher was desecrating the flag during a classroom discussion, the teenager knew he had to do something. And what he did has patriots across the fruited plain cheering.

History teacher Lee Francis admitted he desecrated the flag during a lesson on the First Amendment.

First, he asked the students for a lighter. Then, he picked up a pair of scissors on his desk and tried to cut the flag. When that did not work, he tossed it on the ground and stomped on Old Glory.

“It was such a disgraceful thing for a person to do – especially in front of so many military children who understand the meaning of the flag – apparently unlike him,” he said.

Alex was appalled at what his teacher had done.

So Alex grabbed his phone and snapped a photo – a photo that would eventually go viral on Facebook. Then, the teenager rose from his seat, picked up the flag and took the defiled banner to the principal’s office.

“We are extremely proud of him,” Alex’s mother told me. “He did the right thing.”

However, doing the right thing could land the brave, young patriot in hot water.

Mr. Francis told me Alex “broke the law” and should be punished.

“I believe that child does need to be punished in some way – absolutely,” the teacher told me. “I can’t take a picture of them, and in turn, they cannot do the same of me.”

I called the Cumberland County District Attorney’s office as well as the local superintendent to find out if any laws or rules had been broken. Neither agency returned my calls.

“If it’s within Mr. Francis’ rights to stomp on it, cut it and try to burn it, then it is within my child’s rights to defend that flag,” Mrs. Dunn said.

Sadly, many of the teenager’s classmates are siding with the teacher.

“There was much more support for what he did than what I did,” he said – noting that some students even protested by refusing to stand for the Pledge of Allegiance.

The question really isn’t about desecrating the flag. The school teacher certainly has the right to demonstrate his hatred of America.

“But was it appropriate in a classroom in front of children -- in front of military children? No, it was not,” Mrs. Dunn told me. “It wasn’t the appropriate place to defile an American flag.

I hope the school district or the district attorney does not punish Alex Dunn.

But should that happen, I would be more than honored to stand up and serve the punishment in his place.

And I’d wager there are plenty of American patriots across this great nation who would be willing to do the same.

Thank you, Alex Dunn for reminding us that America is still the land of the free and the home of the brave.