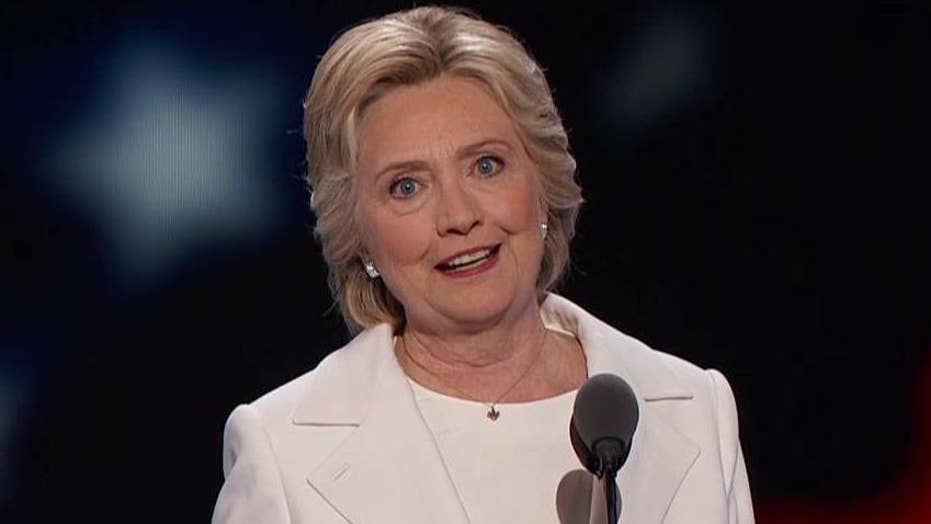 Democratic presidential nominee pledges she will be president for all Americans

One way to parse Hillary Clinton’s acceptance speech: Hillary 2016 is in fact Hillary 4.0 – firmware styled and restyled for a 21st Century market.

It began in 2000 with Hillary 1.0 and a U.S. Senate announcement tailored to tough-as-nails New Yorkers – a “new Democrat,” as she called herself, offering this bon mot: “I don’t believe government is the solution to all our problems.”

Hillary 2.0, unveiled eight year later at the close of a bruising primary loss to Barack Obama, was a liberal who’d just had her bleeding heart ripped out: “We fought for all those who've lost jobs and health care, who can't afford gas or groceries or college, who have felt invisible to their president these last seven years.”

Version 3.0, rolled out last summer in a Roosevelt Island reboot, was a giant H atop Democratic scales of justice: “equality of opportunity . . . “jobs for those who can work . . . security for those who need it . . . the ending of special privilege for the few . . . the preservation of civil liberties for all . . . a wider and constantly rising standard of living.”

Hillary Clinton played it safe on Thursday night. She tried to play to the base and, except on economics, appeal to those independents and Republicans looking for something less fiery than Trump.

That brings us to the latest update, introduced on the closing night of the Democratic National Convention.

This Hillary: she wants it all.

Change-Maker? Maybe I’m confused: the Clinton plan for revolutionizing the nation is… sticking with the status quo of the Obama administration, carrying Bernie Sanders’ water, or making peace will all sides on all conflicts?

The answer: all of that, and more.

Mrs. Clinton’s speech Thursday night began with this bow to Bernie Sanders: “I want you to know, I've heard you. Your cause is our cause. Our country needs your ideas, energy, and passion. That's the only way we can turn our progressive platform into real change for America.

We wrote it together – now let's go out there and make it happen together.”

And then she pivoted to an acknowledgement of the obvious: I've gone around our country talking to working families. And I've heard from so many of you who feel like the economy just isn't working.”

Her solution: “the biggest investment” in her first 100 days in office, which sounds mysteriously like the stimulus package that President Obama tried.

Cross-Over Appeal? The charm of the 1992 Clinton presidential run was winning back disaffected Reagan Democrats.

That lesson was not overlooked on Thursday night, with Mrs. Clinton vowing: “I will be a president for Democrats, Republicans, and independents.”

The Democratic nominee promised a constitutional amendment to overturn Citizens United, wagged a tut-tutting finger at Wall Street, called for a living wage, decried unfair trade deals, and curried favor with Bernie bots by warning “the super-rich are going to start paying their fair share of taxes.”

However, there were also signs that her husband had a hand in the remarks.

Mrs. Clinton labeled the military a “national treasure” (no booing there, as on Wednesday night) and she asked Americans to put themselves in the shoes of “young black and Latino men and women who face the effects of systemic racism, and are made to feel like their lives are disposable”, as well as “police officers, kissing their kids and spouses goodbye every day and heading off to do a dangerous and necessary job.”

Coupled with her call for common ground on guns, race and immigration, it was a bridge to 21st Century triangulation.

A Window Into Her Soul? Her daughter Chelsea’s introduction and the touchy-feely Shonda Rimes video (narrated by none other than actor Morgan Freeman) was the first indicator that the Clinton campaign sees the candidate’s personality as its biggest liability.

However, the speech didn’t pick up on the pathos. Yes, there was a passage about her family’s early days. Yes, Hillary leaned on her Methodist faith. And, yes, she movingly mentioned her mother being abandoned a young girl. Go back over the years, and you’ll find much of that covered.

And speaking of elephants in the room there was this brief admission: “I get it that some people just don't know what to make of me.” Otherwise, the window into the nominee’s soul did open very much.

Mrs. Clinton’s speech was much like her husband’s earlier DNC oration: reciting her resume – a little too much like Tracy Flick.

In fairness, her speech came on the heels of speeches by Bill Clinton and Barack Obama – two of this century’s most masterful storytellers.

But to the concept that there was a need to undo her friends’ contention that the nominee’s “the most famous person in America that no one really knows,” this version of Hillary Clinton wants to connect through policies and values, not emotion.

Cross-Over Appeal? The soup-to nuts style of this speech – feed an idea to the left, pull back to the middle to keep moderates engaged – worked wonders for her husband. Surely you remember those interminable State of the Union addresses?

Speaking of wars without end, Hillary’s remarks clocked in at a little over 56 minutes (Trump went on for 70-plus in Cleveland).

The guess here is that the full speech will focus-group through the roof, as the remarks left few stones unturned and said hardly anything that will generate controversy.

Clinton played it safe on Thursday night. She tried to  play to the base and, except on economics, appeal to those independents and Republicans looking for something less fiery than Trump.

Mission Accomplished? Credit the Democrats for throwing a party that flowed thematically – indoors, at least.

Was it effective? The polls will tell as much.

Meanwhile, there’s this problem for Mrs. Clinton that one speech and one thematic convention can’t solve.

Covering all the bases worked for her husband. Bill Clinton was new on the scene in 1992 and moving his party in a new direction. He also had a down-home style of relating things.

Hillary Clinton, on the other hand, is neither novel nor oozes empathy.

She has the tougher balancing act in touting the status quo while claiming to be a change-maker, a fighter and a peacemaker.

The speech? Slow-cooked, it had many of the right ingredients.

But what to do about the product’s troubled brand?