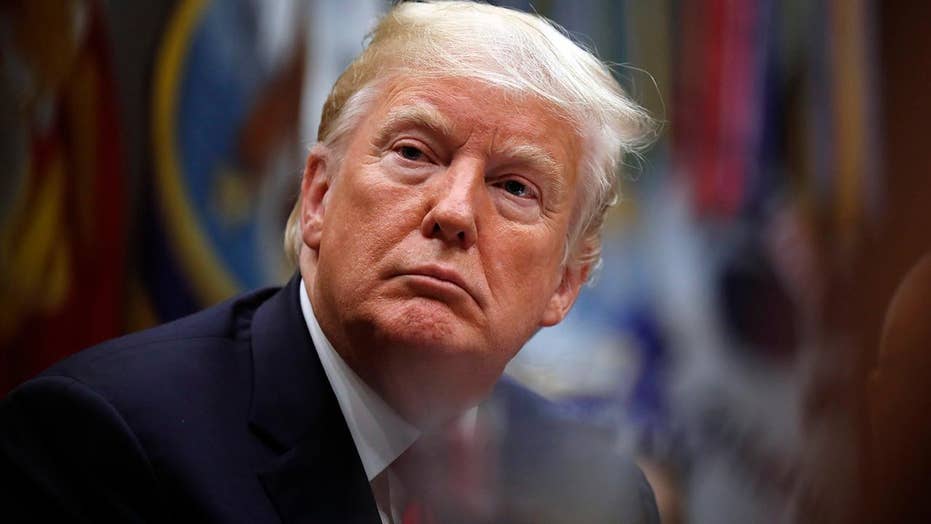 President Trump unleashes on media in a series of tweets

Anti-Trump news organizations continued to attack the president this past week on many fronts, including for what CNN Senior Political Analyst John Avlon called “a real culture of corruption.” In reality, Avlon should have been describing the state of journalism.

CNN, that stalwart of James Earl Jones voiceovers, has no room to point fingers. It got caught believing another phony story about President Trump and is too stubborn and woke to admit it. (Sort of like when three CNN investigative journalists had to resign in 2017, except then the network admitted they were wrong.)

Meanwhile, NBC is facing allegations from a former top producer that executives actively interfered in reporting on allegations of sexual misconduct against Hollywood mogul Harvey Weinstein. And The New York Times has become increasingly obvious about the word play it injects into news stories, so its left-wing agenda remains intact.

There are far too many failure points in the media to fit easily into one column – journalists ignoring Texas Democratic Senate candidate Beto O’Rourke’s past DUI arrest; hypocritical outlets that claim to love Republicans only after they pass away; and repeated defenses of Antifa.

If Avlon wanted to find his culture of corruption, he might start at NBC. The peacock network used to employ Ronan Farrow, who was digging into the Weinstein story. Only, as he got close, the bosses shut him down. He was forced to publish his investigative report and won a Pulitzer Prize.

Turns out it was deliberate. Both The New York Times and Daily Beast had scoops out this week showing how NBC executives tried to silence the Weinstein story. (Just don’t call this media bias!)

Former NBC investigative producer Rich McHugh told The Times that “the network’s handling of the matter ‘a massive breach of journalistic integrity.’” McHugh said he and Farrow were ordered to “stand down” three days before interviewing “a woman with a credible rape allegation against Harvey Weinstein.”

The Daily Beast piled on, writing: “Sources: NBC Threatened Ronan Farrow if He Kept Reporting on Harvey Weinstein.” The Beast explained: “According to multiple sources familiar with the matter, NBC News General Counsel Susan Weiner made a series of phone calls to Farrow, threatening to smear him if he continued to report on Weinstein.”

Farrow said he suspected NBC News President Noah Oppenheim “who moonlighted as a Hollywood screenwriter – was potentially communicating with Weinstein directly about the story, according to the sources.”

NBC went on to have its own internal #MeToo problem with “Today” anchor Matt Lauer, who was forced out in a huge sexual misconduct scandal.

NBC is still playing games on air – in the very same “Today” show. Friday, it spent just one minute and eight seconds on a report and 43 seconds of that time defending NBC.

“Meet The Press Daily” host Chuck Todd on MSNBC blundered into this fiasco by leveraging another story to pretend media bias doesn’t exist.

Todd said: “One of the mistakes we in the mainstream media made during when these false allegations against us for being biased for 40 years happened is we started believing, ‘Oh, maybe we are biased.’ ‘Oh, wait, we can’t look biased.’ So, then, we created a lot of false equivalency issues.”

2. Speaking of Blunders: Most journalists know that a too-good-to-be-true scoop seldom is. But they keep falling for them to aid the Resistance.

That hasn’t stopped CNN, as the network refuses to admit it ran another bogus story about President Trump. Here’s AP’s David Bauder describing the problem: “Despite a key source backing off his assertion, CNN is sticking by a story casting doubt on President Donald Trump’s claim that he did not have prior knowledge of a June 2016 meeting with a Russian lawyer to get damaging information on Hillary Clinton.” Broadcast networks went bonkers after the original report, devoting more than 39 minutes to it during morning and evening newscasts in the last week of July.

The key source is Lanny Davis, the lawyer for Trump’s former attorney Michael Cohen. Davis now says he was wrong when he gave CNN the information. CNN’s reporting team, including former Washington Post Watergate reporter Carl Bernstein, said on the July 26 broadcast of “Cuomo Prime Time” that Cohen would rat out Trump. He was supposed to tell investigators “Mr. Trump knew in advance about a now infamous June 2016 meeting at Trump Tower in which Russians were expected to offer damaging information on Hillary Clinton,” the New York Times reported.

Davis first denied on air at CNN that he was the source for this story. Then he fessed up, firing a torpedo at the network’s “scoop.” Yet it took the broadcast networks about a week to carefully distance themselves from this disaster. But CNN has held on for dear life.

The Washington Post published a long article dissecting CNN’s weird sourcing of the story, where Davis provided information on background but was then cited as declining to comment. The Post made it clear that “critics say the practice is murky at best and ethically dubious at worst.”

The result is even fellow liberal outlets have distanced themselves from CNN. Newsweek wrote: “CNN REFUSES TO BACK DOWN FROM COHEN, TRUMP TOWER STORY DESPITE LANNY DAVIS SAYING INFO MAY BE WRONG.” And Politico gutted CNN’s source as well, “Lanny Davis burns reporters. Should they still give him a megaphone?” (Hint: No!)

Trump has accused CNN of a “major lie” and called it “FAKE NEWS,” of course. CNN hasn’t given up … yet. The Daily Caller described its defense as “CNN QUADRUPLES DOWN ON DUBIOUS TRUMP STORY.” Next headline is quintuples.

3. Weaponizing Journalism: It wasn’t enough for The New York Times to claim conservatives had “Weaponized the First Amendment.” How dare those right-wingers expect equal treatment under the law? Now they’re accused of using the Catholic Church’s sex scandal in a similar manner.

The ridiculously biased piece was headlined: “Vatican Power Struggle Bursts Into Open as Conservatives Pounce.” (Note how conservatives “pounce!”) Poor Pope Francis is faced with a crisis because “an ideologically motivated opposition has weaponized the church’s sex abuse crisis to threaten not only Francis’ agenda but his entire papacy.”

This was a common theme in media as major outlets like The Times and Washington Post targeted conservative Catholic media to defend the pope’s liberal social agenda.

The Times’ weaponization of journalism doesn’t just stick to social issues. It has even warned how the Internal Revenue Service “could be weaponized for political purposes.” That’s apparently only a problem when Republicans do it, not Democrats.

4. Graphic Objection: Sometimes media bias is so bad, it takes a lawyer to object. Kudos to the lawyer in question, Ted Frank, director of litigation for the Competitive Enterprise Institute. Frank spotted a horribly screwed-up New York Times graphic about the number of appellate judges confirmed during a president’s first congressional session.

The chart ranged from 15 (Obama) to 24 (Trump), yet Trump’s gavel was, well, huge. “Today, the New York Times taught me that 24 is over ten times larger than 15,” wrote Frank. He was right. It was the kind of graphic you could only make if you are trying to make Trump’s 60-percent increase appear like a judicial apocalypse.