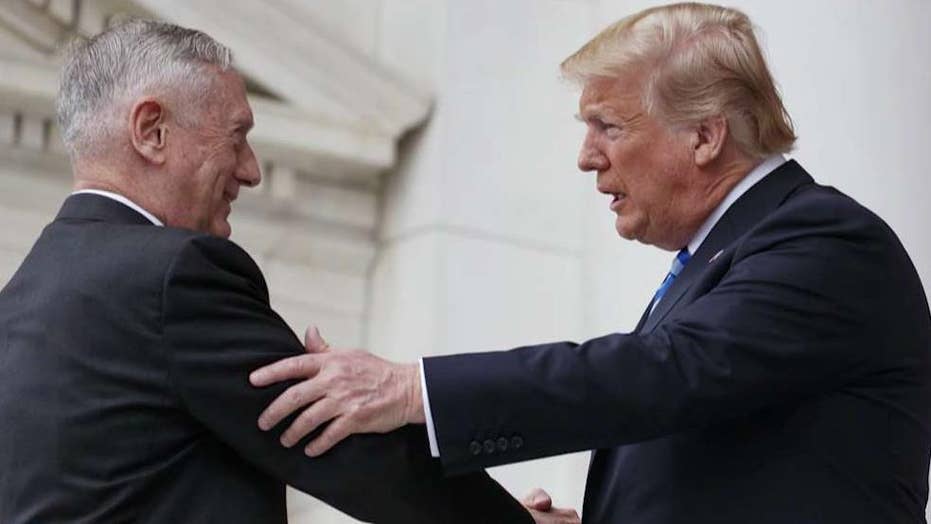 Defense Secretary Mattis to retire amid disagreements with Trump

Gen. Mattis will step down in February; Jennifer Griffin reports.

Secretary of Defense James Mattis, a retired four-star Marine general who served our nation heroically and with an extraordinary record of achievement, will retire Feb. 28 with his head held high. President Trump announced on Twitter Thursday that Mattis “will be retiring with distinction” and said Mattis “has been a great help to me.”

Following his more than 40 years in uniform – including combat deployments in the Persian Gulf War, the war in Afghanistan and the Iraq war – Mattis’ achievements at the Pentagon during chaotic foreign policy times include a record-high defense budget, increased readiness of our armed forces, and streamlined business practices.

President Trump made a wise choice in selecting this patriot to serve in one of the nation’s most vital roles.

Trump opponents who criticize everything he does and will forever try to drive a wedge in the president’s administration will dissect Secretary Mattis’ letter of resignation and no doubt view it in the most negative light possible. However, what has transpired is that a warrior, scholar and public servant has decided to retire after two years heading the Defense Department at age of 68.

In his letter, Mattis highlights the Trump administration accomplishments consistent with the goals of the National Defense Strategy, a subset of the president’s National Security Strategy. Chief among these accomplishments has been providing, “capabilities needed to prevail in conflict and sustain strong U.S. global influence.”

During Mattis’ tenure, the Trump administration has had to climb out of the foreign policy and national security vacuum left by the passive Obama administration.

Mattis then highlights where he and the president might diverge philosophically.

First, Mattis believes that collective security arrangements such as NATO and the anti-ISIS coalition are critical to U.S. power and influence in the world.

Second, the outgoing defense secretary points out that China and Russia are malevolent actors and that we should be “clear-eyed” about that.

During Mattis’ tenure, the Trump administration has had to climb out of the foreign policy and national security vacuum left by the passive Obama administration.

Problems the Obama administration left for President Trump, Mattis and others in the current administration to deal with include: North Korean testing of nuclear weapons and missiles; the Syrian government’s use of chemical weapons against its own people in that nation’s civil war; the terrorist group ISIS raging throughout the Middle East, capturing territory and murdering civilians; and Russia and China surging to global prominence

President Trump led the National Command Authority in his effort to take on each of these challenges.

Under the Trump administration, North Korean testing of missiles and nuclear weapons has all but stopped. A coalition of the U.S. and our allies has routed ISIS in Syria. China has been put on notice to stop its theft of intellectual property and unfair trade practices. And U.S. troops are forward-stationed in Poland as a show of force against Russia.

On top of this, NATO nations are beginning to pay a fair share – 2 percent of their gross domestic product – of their own defense costs, not expecting the U.S. to give them a free ride.

Much has gone well in the Trump-Mattis partnership. We should take the secretary’s letter as a military after-action review of sorts, as I’m sure the general is accustomed to writing after every significant mission.

Mattis’ letter follows the after-action report format: What went well? What do we need to work on?

In the “went well” department, Mattis lists budget, readiness, and business practices as having improved. In the “work on” department, he highlights alliances and peer competitors as challenges that will require work in the future.

It may very well be that the president’s decision to remove troops from Syria and potentially from Afghanistan was a final difference that Mattis could not overcome. But Mattis is smart enough to know that troop deployments are ultimately up to the president to decide, and that the defense secretary is but one member of the National Command Authority.

President Trump is fulfilling campaign promises. He is acting consistently with what he said he would do on the campaign trail.

Ultimately, the president is a nationalist in the best sense of word – a patriot who wants the best for his nation and all our citizens – not someone hostile to other parts of the world, as the distorted leftist rewrite of the term falsely asserts.

President Trump believes America First is a governing philosophy and that foreign interventions are only necessary when our national security is at risk.

Likewise, Mattis is a patriot who believes in a more forward-deployed foreign policy. That is the essence of the difference between the president and his defense secretary.

Whomever succeeds Mattis will face the same challenges and should come from a school of thought that America should only deploy its men and women in uniform when absolutely necessary to protect our vital interests.

Together, President Trump and Secretary Mattis accomplished much in the name of the defense of our nation and enhanced our security. That is what we should be celebrating and be grateful for on the announcement of Mattis’ retirement after a long record of outstanding service.