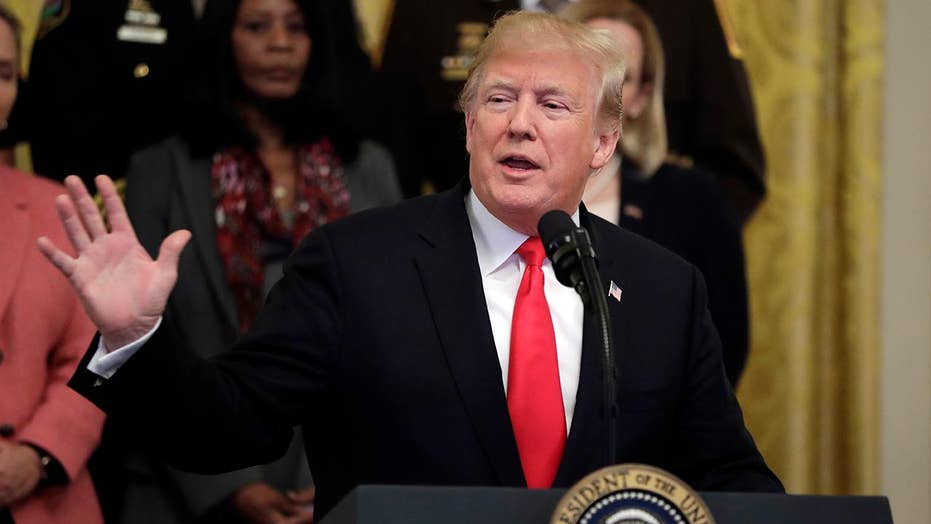 Trump: Threats of political violence have no place in US

President Trump: We will get to the bottom of what happened with the suspicious packages.

The horrible acts of the political vigilantes who planted possible pipe bombs must bring both parties together in their opposition to political violence and in favor of restoring civility in politics. They should appear together in the Rose Garden of the White House and the rotunda of the Capitol united in the defense of our country and our democracy.

President Trump, who has sometimes been tone deaf in times of crisis, struck exactly the right chord when he called for national unity and a bringing down of the tone of rhetoric on all sides.

But Democrats, Senate Minority Leader Chuck Schumer, D-N.Y. and House Minority Leader Nancy Pelosi,  muffed an easy opportunity to join in bipartisan calls for a better politics. Instead they blamed President Trump for any potential violence, alleging that he has frequently condoned violence and that his words ring hollow. They politicized the attempted bombings without even knowing the facts.

Then some media outlets weighed in blaming the President’s attacks on the media as a cause. Yet, it would be equally unfair to blame CNN for the ricin powder sent to President Trump.

This was an enormous opportunity missed. The media and some politicians just could not put aside their blind hatred and instead direct it at those who would disrupt our country.

And now the president has pointed a finger at the media in return.

As of today, we don’t know if these devices were able to or intended to explode. We don’t know who sent them and why. I am not going to even speculate on possible reasons. We simply at this point do not know and have no real evidence on which to judge.

In contrast, when a crazed Bernie Sanders supporting gunman opened up fire against Republican Congressmen on a baseball diamond, the Republicans did not blame the Democrats for inciting the violence. If anything, they carefully avoided making any comments that could be interpreted as politicizing the incident. They followed the golden rule here of never politicizing violence against politicians. We've lost too many of our greatest leaders to assassins to open the door even a crack to blaming one another for these acts.

And newspapers like the New York Times do their readers no service by pointing out the rhetorical excesses of Trump in their stories about the pipe bomb but leaving out the comments of Democratic leaders who urged kicking the Republicans or abandoning civility. No one has completely clean hands here and no one other than the perpetrators is truly responsible for these acts.

We are in a dangerous spiral and we are once again being manipulated by October surprises of unknown origin. Trump has been harsh on his critics but he has never advocated political violence against his opponents. Democrats of late were condoning the shouting down and public shaming of government officials but in fairness never advocated violence. If the mass mailing of pipe bombs doesn’t bring our country together in ways that rise above partisanship, then how will we ever solve issues like immigration and healthcare?

It’s time for all our leaders to show they can put the nation first over petty politics and appear together, united against violence as one voice. If not now, when?