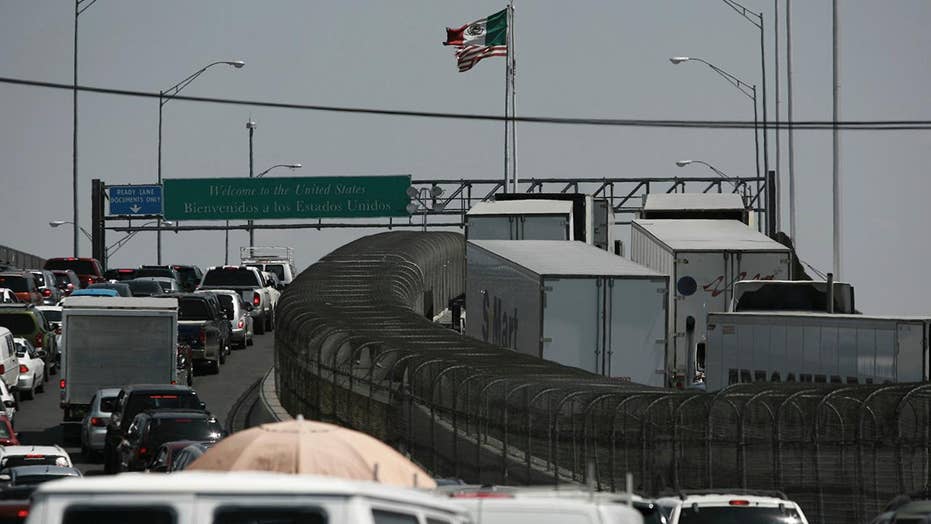 US, Mexico begin talks over tariff threat in Washington

Texas Attorney General Ken Paxton says Mexico is not doing enough to address the flow of migrants into the U.S.

President Trump is understandably frustrated by the crisis at the border. Anyone who watched the video of more than 1,000 illegal migrants sneaking through a hole in a fence near El Paso, Texas — the largest single breach of our border ever recorded — and still says we don't need a border wall is in denial.

There were more than 109,000 apprehensions at or near the southern border in April — the highest level since 2007. But unlike past border surges, when most of the illegal migrants were single men, the vast majority today are either families with children (58,474 in April) or unaccompanied minors (8,897). Our Border Patrol is not equipped to handle it.

Tariffs are the wrong tool to address this crisis. But Congress has denied Trump the right tools. On May 1, the president asked Congress for $4.5 billion in emergency border security funding — a request that included $3.3 billion for humanitarian assistance at the border but no money for a border wall. It's been more than a month now, and what has Congress done? Absolutely nothing.

Perhaps his threats will work. A high-level delegation of Mexican officials is in Washington to defuse the crisis. The Mexican economy shrank by 0.2 percent in the first quarter of 2019 and showed almost no growth in the fourth quarter of 2018. Mexico cannot afford a trade war with the United States. But if a deal is not reached and Trump goes ahead with tariffs on Mexico, it could also have disastrous, unintended consequences for this country.

Pelosi does not want to give Trump a victory by passing his trade agreement. Now she can blame any delay on Trump.

First, this showdown with Mexico comes just as we engaged China in a trade war. Unlike his threats against Mexico, which are opposed by many in his own party, Trump's decision to confront Beijing on its theft of intellectual property, forced technology transfers and barriers for U.S. businesses to compete in sectors of China's economy has strong bipartisan support. But a trade war with Mexico would undermine the trade war with China.

Imposing tariffs on Mexico would help China maximize pain for U.S. businesses and consumers. Why? China and Mexico provide us with many of the same kinds of products. Right now, many American families and businesses that buy those products can avoid the 25 percent tax on Chinese products by buying the same kinds of items from Mexico.

But, as my American Enterprise Institute colleague Derek Scissors points out, if Trump opens a second front in his trade war, they will now get hit by the same tax on Mexican products. And there are no alternatives because our other major trading partners — Canada, Japan, Germany and Britain — do not make the same products China and Mexico do.

Indeed, Mexican tariffs could be even more devastating for Americans than those imposed on China. Deutsche Bank estimates the tariffs could raise the average price of automobiles sold in the United States by $1,300. Indeed, U.S. and Mexican auto-supply chains are so deeply integrated that many parts cross the border multiple times before they end up in a finished vehicle — which means they would be hit by tariffs multiple times, compounding costs. Ten million U.S. workers' jobs depend on this supply chain; tariffs would put those jobs at risk, including those of the "forgotten Americans" in the industrial Midwest whose jobs Trump vowed to protect.

And that's just one industry. Mexico is the United States' third-largest trading partner, sending us $346.5 billion in goods in 2018. Escalating tariffs over the coming year amount to a massive tax increase on American businesses and consumers. After all the effort Trump expended to pass his tax cuts, why would he turn around and unilaterally raise taxes, putting the economic success he has had at risk?

Finally, a trade war gives House Speaker Nancy Pelosi, D-Calif., an excuse not to move on the United States-Mexico-Canada Agreement. Pelosi does not want to give Trump a victory by passing his trade agreement. Now she can blame any delay on Trump.

Are there other tools Trump might use besides tariffs? Senate Finance Committee Chairman Charles Grassley, R-Iowa, suggested "imposing a fee on the billions of dollars of remittances that annually leave the United States to Mexico, which only encourage illegal immigration and don't help the U.S. economy."

Let's hope it does not come to that and that Trump cuts a deal and the whole crisis blows over. Because a two-front trade war would be devastating to the U.S. economy. China is our real adversary. Mexico is not.