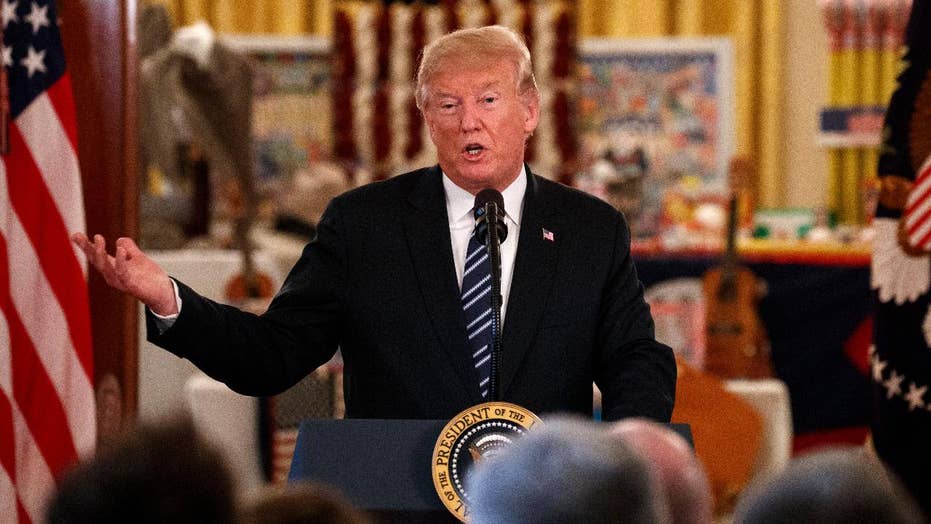 Trump hosts Made in America event as trade clouds gather

Senate Minority Leader Chuck Schumer, D-N.Y., is having a bad week – and it’s about to get worse. On Friday we’re expected to learn from the federal Bureau of Economic Analysis that the U.S. economy grew at a blistering pace in the second quarter of this year, further affirming the success of President Trump’s tax cuts and deregulatory efforts.

President Trump hinted at the good economic news in a tweet Tuesday, writing: “Our Country is doing GREAT. Best financial numbers on the Planet. Great to have USA WINNING AGAIN!”

Economists expect the Bureau of Economic Analysis report Friday will show that the nation’s gross domestic product (GDP) grew between 3.3 percent and 4.6 percent in the second quarter – showing not only a strong economy, but one that is accelerating.

Schumer hopes each day to distract from the booming economy by championing a bewildering array of issues – the latest being the news that “ghost gun” plans will appear on the Internet starting Aug. 1 and enable people to make guns with 3D printers.

The Democratic leader started off this week confronting unimaginable polls that are good news for President Trump and bad news for Democrats.

Despite withering criticism for President Trump’s press conference in Helsinki, establishment outrage over his trash-talking of NATO, alarm among even his supporters about a looming trade war, lingering angst over families separated at the border and serial other “offenses,” President Trump’s approval rating over the past week crept higher.

A new Wall Street Journal/NBC News poll shows 45 percent of respondents giving a thumbs-up to President Trump – a record since he took the oath of office.

Schumer, who desperately wants Democrats to take back the House and the Senate by winning majorities in each chamber in the Nov. 6 midterm elections, must wonder: What will it take to bring this president down?

To be sure, President Trump’s support comes almost exclusively from Republicans, some 88 percent of whom expressed approval of his job performance. As far back as President Harry Truman, only George W. Bush earned higher accolades from his own party at this point in his presidency, and in his case it came on the heels of the 9/11 terrorist attacks.

This is extraordinary – but not mysterious. The poll from the Wall Street Journal also showed a record 50 percent of people giving President Trump high marks for his handling of the economy. That is the only issue on which half or more of the population rates the president positively.

The problem for Democrats is that the economy is the issue that counts most. Every survey that ranks the concerns of Americans puts the economy up top. As families sit around their kitchen tables, few worry whether North Korea’s denuclearization is going as planned. But they sure are concerned about whether they’re about to lose their jobs.

Democrats are in a tough position. They would like to convince voters they hold the key to a more prosperous future. Facing an extremely prosperous present, they have adopted ever more extreme programs like guaranteed jobs or free college tuition to attract support.

Some think such promises are almost too good to be true. They are correct.

Take the proposal by Sen. Kirsten Gillibrand. D-N.Y., for a guaranteed jobs programs. In an interview with The Nation, she argued that such a plan is “exactly the type of roles that government must take to shift power back to workers and our communities.”

Don’t look now, senator, but that power shift is taking place today, when there are more job openings than people applying for work. Unemployment among blacks and Hispanics has hit all-time lows; felons and the disabled are also being hired in record numbers. That’s how capitalism works.

The Center on Budget and Policy Priorities conducted a study on Gillibrand’s guaranteed jobs idea, which is designed to “transform the U.S. labor market,” concluding it would cost nearly 3 percent of GDP. For comparison, our entire military budget makes up about 3.5 percent of the economy. Not happening.

Not every Democratic plan is nonsensical. Most recently, Rep. Steny Hoyer of Maryland, the House minority whip, launched yet another economic platform meant to inspire candidates running for House seats in the midterm elections.

Hoyer’s “Make it in America” program is actually an 8-year-old agenda refreshed by insights from what its author calls the “Make it in America Listening Tour” which, not surprisingly, focused on toss-up states won by Donald Trump. The new program emphasizes job training, providing health-care for entrepreneurs, and repairing infrastructure.

These are good ideas, which is why the Democrats’ program has been virtually pre-empted by President Trump.

On June 16 the president signed an executive order expanding the nation’s skill development and apprenticeship programs, an idea he campaigned on. In doing so, President Trump could tout the tight labor market – citing, for instance, that for the first time in the nation’s history there are more job openings than applicants.

Also, the White House just hosted a “Made in America” program, showcasing what the president described as “the greatest products in the world – products made with American heart, American sweat, and American pride.”

President Trump can point not only to knives and trucks made in the U.S.A., but also to the 344,000 manufacturing jobs that have been created since he took office. That’s powerful, especially since any number of left-leaning economists have long written the U.S. off as a manufacturing hub.

The White House is also working to create less expensive health-care for affiliated groups. That should help entrepreneurs and other small businesses.

A year ago Sen. Schumer launched a meager economic platform, called “The Better Deal,” which failed to get much notice. He rolled it out in response to polling that showed only 37 percent of voters thought that the Democratic Party stood for something, while 52 percent said the party only stood against President Trump.

For Democrats, things have only gotten worse. Not only has Trump’s approval rating gone up, but Gallup reports Americans’ satisfaction with the direction of the country recently hit a 12-year high. To repeat, the country is happier with our course today than at any time during Obama’s presidency.

Schumer knows his party needs to sell more than anti-Trump vitriol to voters. With every indication the economy will hum along through November, he has his work cut out for him.