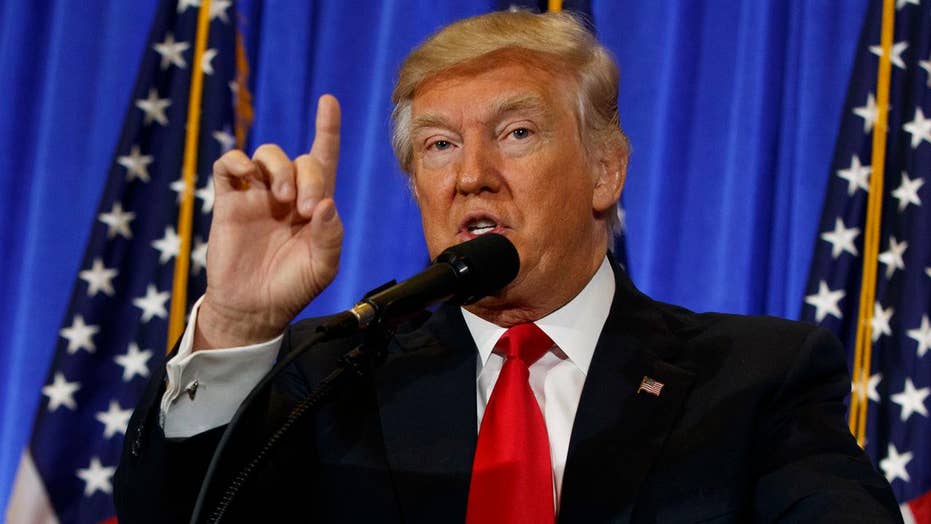 Trump: Russia will have far greater respect for US

The most impressive aspect of Trump’s first news conference was this: he hasn’t changed a bit. Anyone hoping to see a Donald Trump cowed by the enormity of the tasks set before him, defensive about  unconfirmed salacious “oppo research” just released, placating of the media regulars who will cover his time in office – were disappointed.

For the millions – now half the country – that support him, his first press conference since becoming president-elect was a wonder to behold. Strong, assertive, focused on making America great again.

Make no mistake, there’s a new sheriff in town, one who refuses to be intimidated by the news media.

The president-elect came out swinging against those who had published and thereby given credence to the unverified and compromising material collected by Russian operatives, reports that Trump called “phony.”

He praised the New York Times for making it clear the information is “unconfirmed” and admitting it was intended to “derail Trump’s candidacy.”

On the other hand, in retaliation for its role in disseminating the reports and treating them like a smoking gun, he refused to take questions from CNN, which he named “fake news;” many in the room applauded, and rightly so.

After weeks of telling the country how damaging fake news is to our democracy, it appears hypocritical in the extreme for the media to gleefully disseminate more of the same, as long as it might discredit the GOP president-elect.

While the press conference was timed to focus on the considerable measures the president-elect is taking to isolate himself from his business empire, most of the questions asked by reporters concerned the hacking by Russia of the DNC and John Podesta’s emails.

Trump agreed that Russia (and maybe others) had been behind the intrusions, but criticized the U.S. (and by implication the Obama administration) for its slow response to cyberattacks – from Russia, China, and other countries – and said that the federal government has done a particularly poor job defending against such invasions. He noted that of seventeen different industries, the federal government ranked 17th in protecting its data.

Trump more than once commended Reince Priebus, who, as head of the RNC, arranged to protect the party’s communications, noting that the DNC had only itself to blame for the apparent ease with which Russia had penetrated its servers.

He also drew attention, rightly, to what really harmed Hillary Clinton’s campaign – not the act of hacking, per se, but rather the injurious information revealed about Hillary’s camp conspiring with the DNC against Bernie Sanders, getting debate questions ahead of time, John Podesta’s unflattering view of the candidate and so on.

As to his purported bromance with Vladimir Putin, President-elect Trump emphasized that good relations with Russia would be an asset – not a liability – as the two countries have common ground in trying to eradicate ISIS.

He did not guarantee that he would be able to work with the Russian strongman, and suggested that if need be he would be tough on the Putin.

Answering a question about the possibility that Russia has video of Trump misbehaving in some way, or other materials with which they could blackmail him, the president-elect pointed out that he has been for many years a public figure, and as such, careful about security.

On his many trips to other countries, he said, he had always cautioned his entourage to be wary of hidden cameras and possible scrutiny. Like so much of Trump’s real-world practicality, this had the ring of truth.

Indicating that he takes cybersecurity seriously, Trump announced that he had charged Senator Dan Coats, his nominee for director of national intelligence, and Mike Pompeo, his pick for CIA chief, with preparing a report within 90 days outlining measures to bolster the country’s cyber defenses.

Mr. Trump reiterated his promise to build a wall to secure our southern border, and that through some means Mexico will pay for the wall. He dismissed criticism that he had backed away from that guarantee, explaining that he wanted to move ahead with the construction instead of waiting for a year or more to line up Mexico’s contribution.

The president-elect made it clear that another kind of wall – one which isolates him from his business interests and potential conflicts of interest – will be constructed even sooner.

His sons will run the Trump organization, and he personally will have no input, and will not even receive detailed information about its progress.

To avoid possible pay-to-play problems, his real estate company will not undertake any new deals in foreign countries, and has scrubbed 30 such projects that were already underway. While domestic deals will be allowed, each will be thoroughly vetted by an ethics advisor. Also, any profits collected by foreign diplomats staying at Trump properties will be turned over to the U.S. Treasury. Though critics will doubtless find these arrangements insufficient, the plan seems thoughtful and quite comprehensive.

At the end of his time in office, Mr. Trump said he will review how his sons have done, and hopes that they will have done well. If not, he said, he’ll tell them “You’re fired.”