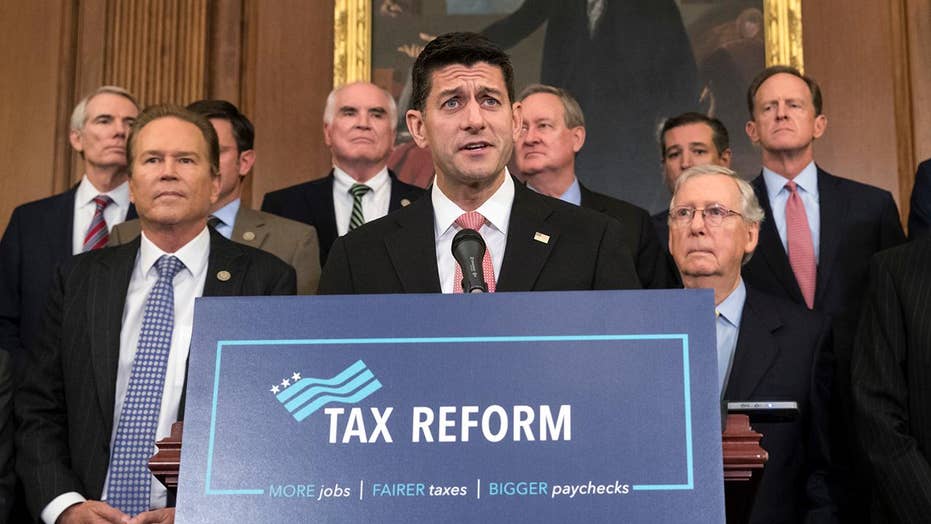 The GOP tax plan is, to quote Joe Biden, a “big f***ing deal.”  For Republicans, it is a chance at redemption, having failed miserably to follow through on their number one campaign promise: repealing and replacing ObamaCare. For Mitch McConnell and Paul Ryan, it is an opportunity to demonstrate the leadership that was lacking in the health care battle. For President Trump, passing comprehensive tax reform would show supporters that he can navigate the swamp, and that their votes meant something. For the country, the proposed changes rolled out Wednesday could be a major shot of B-12, energizing investment and spending.

Most important to that end is the suggested 20 percent tax rate for corporations, down from 35 percent, the resolution of our one-off treatment of overseas-earned income and lower taxes for so-called “pass-through” entities. The latter include many millions of small businesses whose owners have historically filed as individuals and paid a top rate of 39.6 percent; under the plan, their rate declines to 25 percent. Since small firms (defined as having fewer than 500 employees) account for well over half of job growth, providing tax relief for that sector will boost hiring and investment.

Lowering tax rates for corporations will reduce the incentive for businesses to move overseas and make them more competitive with foreign rivals. Resolving, as the plan will do, our unique and dysfunctional approach to taxing profits earned overseas will cause less uneconomic maneuvering by corporations and allow them to repatriate monies earned abroad, which should boost domestic investment.

Those measures are welcome. Donald Trump was elected because millions of working people were discouraged by our nation’s sluggish growth and miserly income gains. During the Obama years the economic cylinder that failed to spark was business investment. The torrent of regulations, White House hostility to the business community, anxieties left over from the financial crisis and excessively high taxes combined to staunch spending, resulting in below-par growth and reduced productivity. That under-investment hampered wage increases, and makes this effort at tax reform critical.

Legislators will have to stare down the harsh glare of Nancy Pelosi et al, and endure the inevitable demagoguery from the liberal media. They will have to show some fortitude, and some cohesion, which they failed to do in the health care battle.

On the individual side, the news is mixed. The plan calls for a modest hike in the lowest tax bracket (from 10 percent to 12 percent), but claims that, "Typical families in the existing 10 percent bracket are expected to be better off under the framework due to the larger standard deduction, larger child tax credit and additional tax relief that will be included during the committee process.”  Elsewhere, rates are lowered, and the near-doubling of the standard deduction will help most Americans.

In other words, middle class families should benefit from the plan, as was promised. So far, so good.

In addition, getting rid of the Alternative Minimum Tax will be celebrated by those caught in its ever-expanding and unintended web. As Mercatus Center fellow Veronique de Rugy once wrote, “The Alternative Minimum Tax (AMT) was created in 1969 to prevent 155 wealthy taxpayers from using deductions and credits to avoid paying any federal income taxes.” Last year it ensnared over four million taxpayers.

The least attractive aspect of the plan is the indication that higher-earning Americans may have to shoulder an even greater share of the nation’s taxes than they do today. Currently, the top 1 percent pays 40 percent of all income taxes, while their share of income is 21 percent. The top 10 percent of earners pays 70 percent. Those figures do include sole proprietorships and other entities that file as individuals; those groups will pay less in taxes, but regular people with high-income jobs will pay more. That same group will be socked by the elimination of the deduction for state and local taxes. It looks like successful New Yorkers and Californians should have voted for Trump.

Rather than provide tax relief to people with high incomes, the Group of Six legislators and White House participants who crafted the plan decided to ditch the inheritance tax. Prepare to hear howls from Democrats, who will charge that the program is a big give-away to the rich. In fact, they are right; only people who die with an estate valued at more than $5.49 million will owe any inheritance tax.  Taxing income rather than wealth, in my view, is a questionable priority but doing away with the inheritance tax has long been a priority for the GOP, and rightly so.

Trade-offs like that will have to be made because Republicans failed to roll back ObamaCare’s taxes. The GOP had hoped that by eliminating the Affordable Care Act’s financial infrastructure, saving the country $1 trillion in taxes over ten years, they would have a much lower tax base to work with. That would have made tax reform easier. President Trump has occasionally sounded optimistic about working with Democrats to pass a tax reform bill. It isn’t going to happen. Consequently, the tax plan will have to pass through budget reconciliation, which requires it be “revenue” neutral after ten years. That trillion dollars would have made satisfying that requirement a whole lot simpler.

Much of the details of the plan will be hammered out in committee. There, legislators will have to stare down the harsh glare of Nancy Pelosi et al, and endure the inevitable demagoguery from the liberal media. They will have to show some fortitude, and some cohesion, which they failed to do in the health care battle.

Simply said, Republicans could very easily muck this up too.