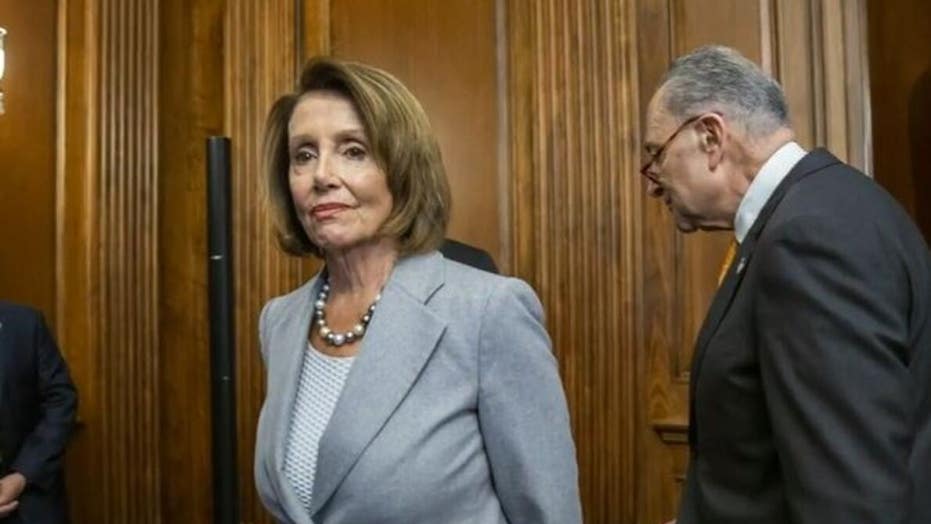 The California Democrat is proposing a $3 trillion bill, titled the Health and Economic Recovery Omnibus Emergency Solutions Act, or HEROES Act, that is packed full of gifts to Democrats. And incredibly, this is the pared-down version.

The New York Times reports that the original Democratic bill asked for $4 trillion.

If you had any doubts that Democrats are politicizing the coronavirus crisis, Pelosi’s grab-bag of left-wing goodies should clear your mind.

First, the 1,800-page bill gives people all kinds of reasons to stay home, dampening any momentum that might stem from governors reopening their states.

For example, the proposal extends through end of the year the inflated unemployment benefits of an extra $600 a week created by the Coronavirus Aid, Relief and Economic Security (CARES) Act. Those benefits under the $2.2 trillion CARES Act had been set to end in July.

Many business owners have reported difficulty rehiring staff laid off in the early weeks of the shutdown. The $600 weekly supplement to normal unemployment pay approved by Congress in April has raised income for low-paid labor above their normal wages and caused many to resist going back to work.

In response, employers may have to hike pay. Nothing could kill off a recovery faster than making it more expensive to hire workers. That’s what the Affordable Care Act did in 2010, as it required businesses to pay expensive new health care benefits. ObamaCare slowed job creation and stifled the recovery from the Great Recession for years.

Pelosi also includes another round of checks to be sent to individuals and families, and extends those payments to people “without Social Security numbers.” That’s code for people who are in the country illegally. This is Democrats’ appeal to Hispanics, a core voting group that earlier this year had begun trending towards President Trump.

Doubling down, the bill insists there be no deportations of illegal immigrants in “essential businesses.” Those businesses are defined as including nearly every industry that might employ undocumented workers – restaurants, food processing, hotels, etc.

Some might interpret that portion of the bill as a “stealth amnesty,” since if Democrats win in November they would almost surely extend the protections.

Pelosi is thereby using the coronavirus pandemic to push through a long-time Democratic ambition, possibly creating a path to citizenship for the millions of people who have come to the country illegally. Such a blanket amnesty would significantly enhance Democrats’ future election prospects.

Of course, Pelosi’s bill includes myriad other items that have nothing to do with the coronavirus pandemic and everything to do with politics. It includes, for instance, a $25 billion lifesaver for the Postal Service. Democrats are worried the Postal Service will go under, crushed by outsized pension obligations, throwing 600,000 union members (aka Democrat voters) out of work and possibly leading to the service being privatized.

The problems facing the Postal Service are nothing new, but the pandemic has taken only a moderate toll on its revenues. As Sen. Ron Johnson, R-Wis., recently noted in a letter to the Postmaster General: “Postal Service revenues were down just 5.9% from March 16 through April 19 and that revenue for April was close to the levels from last year.”

Why then the increased aid?

The Los Angeles Times answers the question, reporting recently that “The Democratic Party and large progressive groups are finding the Postal Service cause to be among their most effective fundraising messages, and 100 major progressive groups just began a campaign framing its potential collapse as a civil rights issue because of its long-standing role as an entry point into the middle class for African Americans.”

The HEROES Act also pushes states to allow voting by mail, but Sen. Tom Cotton, R-Ark., tweets that Democrats “would *prohibit* states from requiring photo ID, notarization, or witness signatures to send or receive mail-in ballots.” Cotton notes: “This is the perfect storm for voter fraud.”

Another red herring is the call in Democratic proposal for restoring the SALT (state and local tax) deduction that was eliminated by the 2017 Tax Cuts and Jobs Act. That measure was a blow mainly to blue states like New York and California with high state and local taxes.

Not only did wealthy Democratic donors in those states squawk over having to cough up increased taxes, it also inspired an exodus of well-heeled residents to lower-tax states. New York, for example, has led the country in population decline, a loss that poses a real threat to the state’s long-term prospects.

Democratic Gov. Andrew Cuomo has explained that New Yorkers are moving to Florida for better weather. Seriously. We know better.

Pelosi’s bill also calls for the release of all federal prison inmates who suffer from diabetes, asthma or who are over the age of 50, unless law enforcement officials can determine such individuals are a threat to a specific person. Not a threat to society, mind you, but to a “specific person.”

This is another offering to minorities; 31.5 percent of the federal prison population is Hispanic and 37.8 percent are black.

Grinches on the Republican side of the aisle have called Pelosi’s goodie-packed bill “dead on arrival” and no one expects it to pass.

But come November, Pelosi and her colleagues will doubtless remind voters of all they tried to give them, and blame the GOP for stuffing coal in their stockings instead.

Republicans will argue that, as we pile up trillions of dollars in more debt, getting the economy working again is the only sane way forward. They will be right. The damage being done by the ongoing lockdown is enormous and includes medical needs unmet, rising suicides and drug abuse, as well as a real hit to our kids’ education.

Nothing should stand in the way of rebuilding our economy, and certainly not Pelosi’s ambitions.

Voters should take the HEROES bill seriously, as a reminder of what’s at stake should Democrats win the White House in November. The $3 trillion in the legislation could turn out to be just the down payment on “transforming” our economy, as the Pelosi crowd is so eager to do.