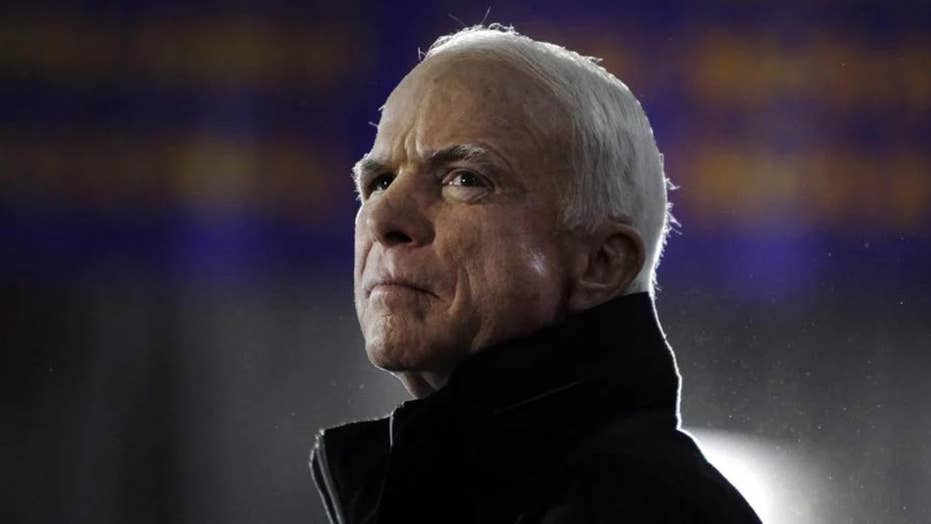 When McCain returned to Vietnam

President Trump should award John McCain, who died on Saturday, the Medal of Honor. The posthumous award would recognize the senator’s extraordinary heroism during his five years of captivity in North Vietnam, when he was tortured mercilessly, leaving him disabled for life. The compassionate and respectful gesture might also help to heal some deep wounds in the Republican Party.

McCain was a Navy fighter pilot when his plane was shot down on a mission over the North Vietnamese capital of Hanoi in 1967. He fractured both arms and one leg when he was ejected from his jet and nearly drowned when he parachuted into a lake. North Vietnamese pulled the badly injured McCain from the lake and attacked him. One bayonetted him and crushed his shoulder with a rifle butt.

McCain was routinely beaten by his captors once he was imprisoned, in part because he refused to accept early release, offered once the North Vietnamese realized he was the son of a Navy admiral and wanted to appear merciful for propaganda purposes. McCain refused to leave until the U.S. POWs captured before him went home first.

Because of his 23 bombing raids over North Vietnam and the leadership he showed in the infamous so-called Hanoi Hilton – McCain received the Silver Star, Legion of Merit, three Bronze Stars and a Purple Heart.

John McCain deserves the Medal of Honor, our nation’s highest military award. President Trump would acknowledge the senator’s extraordinary service to our country and at the same time demonstrate his respect by bestowing it on one of his fiercest critics.

John McCain deserves the Medal of Honor, our nation’s highest military award. President Trump would acknowledge the senator’s extraordinary service to our country and at the same time demonstrate his respect  by bestowing it on one of his fiercest critics. It is by honoring our adversaries that we ourselves gain in stature.

The 81-year-old senator from Arizona and former Republican presidential candidate was a true American hero, one who by turns elevated the country’s discourse and exasperated his friends and foes alike.

Though he regularly sparred with Democrats – including President Obama, whom he once dismissed as a “celebrity,” and Secretaries of State John Kerry and Hillary Clinton – those on the left forgave him when he became one of President Trump’s most damaging political adversaries.

The enemy of my enemy…

The death of John McCain is a tragic loss for his family and for the millions who revered his old-style politics, his occasional forays across the aisle, his downright cussedness and his extraordinary wartime valor and patriotism.

There are far too few people in the public eye today who have earned our respect, and even fewer willing to buck their party by standing up for principle.

It is also a tragedy that McCain died at a time when his antagonism toward President Trump and his opposition to a seven-year effort to repeal ObamaCare had caused him to lose the admiration of millions.

Arguably, Donald Trump initiated the bad blood. As a candidate during the GOP presidential primaries, Trump said that McCain was “not a war hero. He was a war hero because he was captured. I like people that weren’t captured.”

It was an appalling comment. Many thought the inexcusable remark would end Trump’s run for the White House, but it instead became one of many outrages overlooked by voters fed up with the status quo and looking for a brawler to fight for their interests.

Still, it turned out to be a costly comment for Trump, the GOP and the country.

In the early hours of July 28, 2017, McCain delivered his famous thumbs-down on the Republican effort to repeal most elements of ObamaCare, causing the measure to fail on a 51-49 vote.

At the time, McCain tweeted: “Skinny repeal fell short because it fell short of our promise to repeal & replace Obamacare w/ meaningful reform.”

The bill McCain toppled was indeed a terrible piece of legislation. Many in the Senate voted for it only after House Speaker Paul Ryan, R-Wis., promised it would never become law, but rather would be reworked through a House-Senate conference committee into a better bill.

Nonetheless, McCain’s last-minute vote was a stunning   blow to his party, his voters and, certainly, to his president. It was a shock to his close friend, Senate Majority Leader Mitch McConnell, R-Ky., who had patiently spearheaded the repeal effort.

McCain also voted several months later against the Cassidy-Graham bill, which was a much better approach to replacing ObamaCare, targeting the bloated federal government and sending health-care dollars back to the states. The proposed law was crafted in part by his best friend in the Senate, Lindsey Graham, R-S.C.

Not only did McCain torpedo his colleagues’ efforts to follow through on a campaign promise, he voted twice to preserve ObamaCare, which was especially harmful to his own state.  As he himself wrote, “in my home state of Arizona … premiums are skyrocketing and health care providers are fleeing the marketplace.”

In that statement, McCain called for hearings to consider legislative alternatives, and in particular urged his colleagues to heed “the recommendations of (the) nation’s governors.…” But by being responsible for the defeat of two GOP alternatives to ObamaCare, McCain did just the opposite.

Arizona Gov. Doug Ducey, a fellow Republican, supported the Graham-Cassidy bill – in part because in 2016 his state suffered what The New York Times reported was “the biggest average (health insurance) rate increase in the country. The news was even worse in Phoenix, the nation’s sixth-largest city, where the price of a midlevel plan … increase(d) by 145 percent on average.”

Because ObamaCare was falling apart in Arizona, with all but two providers pulling out, McCain campaigned for re-election to the Senate promising to get rid of it.

Though McCain seemingly acted out of spite, so eager was he to hit back at President Trump, at other times he balked at GOP priorities because they were wrong, as in his opposition to ethanol subsidies and the use of torture. On several occasions he drove the Republican leadership to despair; many voters, though, prized his independence.

Over the past two years, McCain became a thorn in Trump’s side, most recently when he called out the president’s performance at the Helsinki press conference with Vladimir Putin “disgraceful.” The president has returned the favor, often singling out McCain’s vote against repealing ObamaCare at rallies. Recently, when the president signed the John S. McCain National Defense Authorization Act – so named by colleagues to honor the terminally ill senator – Trump refused to mention McCain’s name. That was petty, and like all such pettiness, made President Trump seem small.

With McCain’s passing, the president has a chance to do something grand and magnanimous. It would be another Trump shocker, but could win him many friends among McCain’s enduring supporters. He should give his former rival for the nation’s highest military accolade, the Medal of Honor.