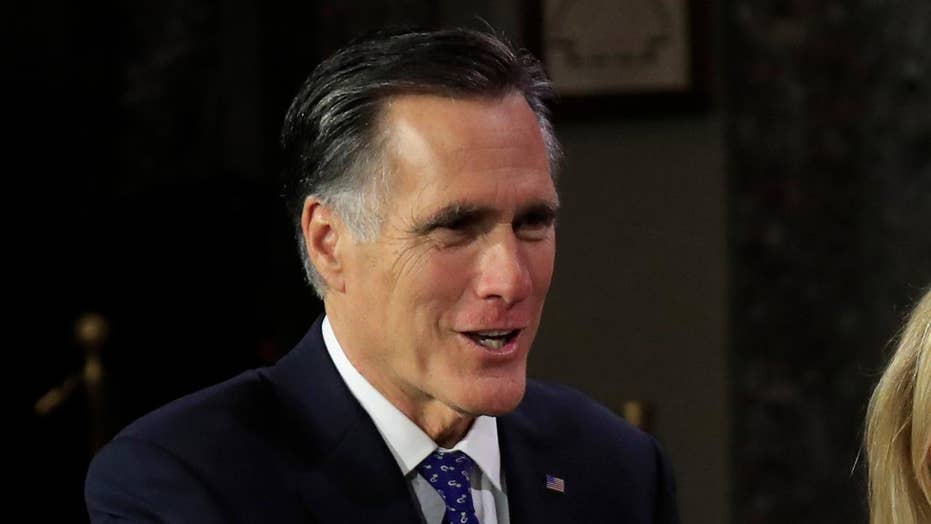 Shame on Mitt Romney. Publishing an ad hominem attack on President Trump in The Washington Post on the cusp of occupying a Senate seat that he won with the help of an endorsement from the Oval Office was dishonorable. In addition, it underscored what many voters suspected all along about Romney: that he is not to be trusted.

You have to ask, what was the senator-elect from Utah thinking? That by proclaiming that President Trump had not “risen to the mantle of the office” Romney would protect himself from a Trumpian taint? To what end? It’s hard to imagine.

It is not as though the wealthy former private equity mogul needs to secure a future career as a GOP-turncoat talking head, as ex-Sen. Jeff Flake, R-Ariz., may hope to become. Last year, anti-Trumper Flake met with MSNBC President Phil Griffin and CNN’s chief Jeff Zucker, sparking speculation that post-Senate he would become a contributor to one of those outlets.

That’s not Romney’s situation. Could it be that Romney wants to be at the ready in case the impeachment abyss opens up and consumes the president … and Vice President Mike Pence at the same time? Does he think he’ll be the chosen favorite in case GOP leaders have to go to their bench? It isn’t going to happen.

And especially after writing the anti-Trump op-ed. Republicans could change their minds, but at the moment a startling 89 percent support the president, according to a Gallup Poll.

After his defeat in 2012 and in the run-up to the next election, Romney made the rounds of important Republican funders, looking to test their support for a re-run. I spoke to some of those folks as the 2016 contest got underway. The near-universal consensus: he had had his shot.

That isn’t to say that many Republican voters don’t regret Romney’s defeat. The former Massachusetts governor would have been a much better president than Barack Obama, given his considerable management expertise and profound understanding of the economy.

Also, Romney had foreign policy chops. His comments about Russia being the nation’s biggest threat proved prescient, even as he was mocked by President Obama, who thought he knew better.

But, Romney would not have disrupted the status quo, and that’s what voters wanted. Millions of Americans were fed up with a globalist agenda, tired of being told the U.S. had run out of gas, furious over the absurdities of political correctness – they wanted a change, and they elected Donald Trump.

Romney would not have pulled us out of the Paris Climate Agreement, because he would have feared the backlash. He would have been too polite to throw over the Iran nuke deal, or to confront the Chinese on their ongoing theft of intellectual property or demand that our NATO allies up their defense spending; he would not have resolutely, without fail, put America first.

In his op-ed in The Washington Post, Romney tempers his criticisms of the president by lauding some of Trump’s accomplishments, saying the president was “right to align U.S. corporate taxes with those of global competitors, to strip out excessive regulations, to crack down on China’s unfair trade practices, to reform criminal justice and to appoint conservative judges.”

But would Mitt have done those things? Would he have stood behind Supreme Court nominee (and now justice) Brett Kavanaugh while the liberal media slimed his reputation and judged him guilty of sins allegedly committed decades earlier on the flimsiest of evidence?

No, we saw during his 2012 campaign that Romney did not have the steel to go the distance. After he trounced Obama in the first debate between the two, Romney failed to press his advantage and the second debate was a disaster for him.

Romney refused to go after Obama on the shameful lies about the deaths of Americans in Benghazi, wouldn’t challenge the president on his handling of the auto industry meltdown and allowed Democrats to paint him as anti-female.

Mitt Romney, who ran for the presidency twice, is horrified that American voters elected Donald Trump.

If he couldn’t stand up to Obama, how would Romney have fared with Chinese President Xi Jinping?

But there is a more profound reason that Romney lost to Obama in 2012; he was ashamed of his success. While President Trump has touted his fortune and his accomplishments as a developer (possibly to excess), Romney never talked up his enormous wins as a private equity investor. Maybe he thought American voters would not understand his business dealings, or maybe he thinks that amassing a fortune is somehow shameful.

Mitt Romney helped create or rebuild great companies like Staples, Sealy (the mattress firm) and the Sports Authority, creating wealth not only for his firm Bain Capital but also for investors. Those businesses also created thousands of jobs. Romney’s firm also had some clunkers, but for the most part he and his partners supplied capital to entrepreneurs who took that funding and created solid and enduring companies.

That is a record to be proud of, but you would never have known that from Romney’s presidential campaign. Running from your past is smart if your history is dishonorable; otherwise, it is dishonest.

Mitt Romney, who ran for the presidency twice, is horrified that American voters elected Donald Trump. He is not alone. There are reasons why many Republicans are wary of too close an association with the president, and Romney’s op-ed detailed many of those.

But a more honorable approach for the newly elected senator would have been to become a leader in his caucus, to attempt to work with and advise the president by becoming a trusted voice, and to serve the American voter by making this presidency as successful as possible.

I am disappointed that Romney chose to do otherwise.